Prominent Luminaries in Global Film Industry to Present at SCREENSINGAPORE 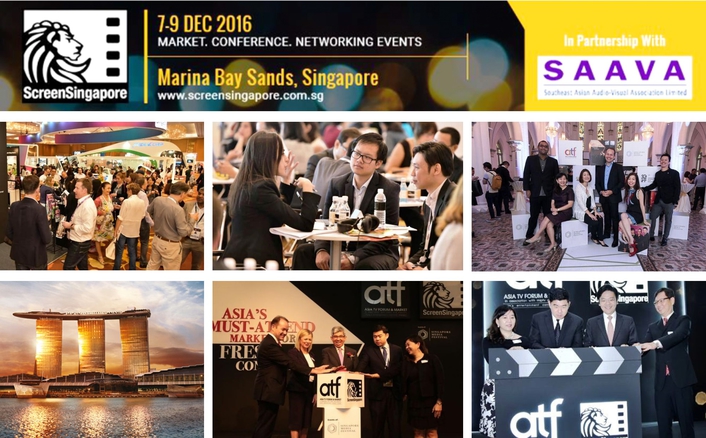 ScreenSingapore, together with the Southeast Asian Audio-Visual Association (SAAVA), today announced the first of its slate of film dignitaries who will be speaking at the Southeast Asian Film Financing (SAFF) Conference, themed “New Independent: Producing for a Globalised Film Economy”. The second edition of the SAFF Project Market also released its shortlist, with 15 projects representing seven Southeast Asian nations.

“For six years now, ScreenSingapore has been a key Southeast Asian platform that gathers the global industry’s best minds, for power-packed conference sessions that deliver actionable insights about the dynamic film landscape. We are deeply appreciative of partners like SAAVA and Ties That Bind: Asia/Europe Producers Workshops (TTB) that have joined hands with us to groom the next generation of Southeast Asian filmmakers. We certainly look forward to bringing more stories from the region, to the world,” said Yeow Hui Ling, Senior Project Director of ScreenSingapore and Asia TV Forum & Market (ATF), Reed Exhibitions.

Justin Deimen, Executive Director of SAAVA added, “The SAFF Conference and Project Market are an extension of SAAVA’s efforts to encourage creative development and entertainment financing across Southeast Asia, and the events’ introduction last year certainly created an awareness about some of the great projects and filmmakers within the Southeast Asian film industry. We are encouraged by the continued high quality of entries to the SAFF Project Market this year, and look forward to cementing this as the region’s foremost media financing platform in the years to come.”

SAFF Conference - New Independent: Producing for a Globalised Film Economy
On 9 December 2016, some 30 film luminaries from Southeast Asia and beyond will address present-day concerns faced by filmmakers in the region, including film financing, strategies for generating return-on-investment (ROI), the perfect pitch package, and trends in the regional industry.

Kicking off the day will be two Ties that Bind: Asia/Europe Producers Workshops. At “Europe & Asia: An Insight into Film Finance”, experts from both continents will enlighten Asian producers on how they can enhance their appeal to European counterparts keen to provide access to funds and distribution sources, for co-production opportunities. Amongst these is Jean-Baptiste Babin, Founding Partner & Head of Co-Productions at Backup Media Group, which has managed the financing of over 400 cinema and TV productions, including independent crime drama film “Cold in July” (2014), which received the Best Director award at Sitges - Catalonian International Film Festival (Official Fantàstic Òrbita) 2014.

A second panel, “Recouping: Strategies from the Top Sales Agents / Distributors”, will feature eminent personalities such as Emelie Georges, Managing Director of Memento Films and Executive Producer of multiple award-winning “Still Alice”; Georges Goldenstern, General Manager of Cinéfondation, an arm under the Cannes Film Festival that inspires and supports the next generation of international filmmakers; and Nicolas Brigaud-Robert, whose sales agency, Films Distribution, holds international rights to Oscar 2016 Best Foreign Film, “Son of Saul” (2015), and other Cannes 2016 films – “Ma’ Rosa” (2016), “The Stopover” (2016) and “Exile” (2016).

Christophe Bruncher, Head of Studies of TTB shared, “TTB aims to create opportunities for Europe-Asia co-productions. With sharing sessions by prominent experts from both regions, established and aspiring filmmakers can expect to gain a deeper understanding that will facilitate collaborations between the continents.”

Another high-profile industry leader, Kathy Morgan, will share her experience in film financing and creating the perfect pitch package at "Producer or Distributor: The Sales Agent in Hollywood and the World". Founder of Kathy Morgan International, she holds over three decades of experience in worldwide sales, distribution, marketing and financing of theatrical motion pictures, including the critically-acclaimed “The Danish Girl” (2015).

A host of other panels will place a spotlight on the biggest news and shake-ups in the ASEAN film economy; Malaysia's leading producers and financiers; as well as independent filmmakers in Asian giants, China and India. Complementing the ATF C-Level Summit's focus on digital disruption, the SAFF Conference will also shed light on film distribution in the face of over-the-top and video-on-demand sales channels.

SAFF Project Market 2016 shortlist announced
Following a successful first edition, the second SAFF Project Market has released its shortlist of promising feature-length projects that will have a shot at financing, distribution and collaboration opportunities to bring these films to fruition. This pitching competition and launch pad for filmmakers from the region is a partnership between ScreenSingapore, SAAVA and TTB, and is also supported by the Asia-Europe Foundation (ASEF). This year’s edition will also feature a Malaysia Spotlight that will focus on five Malaysian projects.

From over 100 submissions from various Southeast Asian countries, an esteemed panel of judges identified 15 finalists from Cambodia, Indonesia, Malaysia, Singapore, Thailand, The Philippines and Vietnam. More details are available in Annex A. 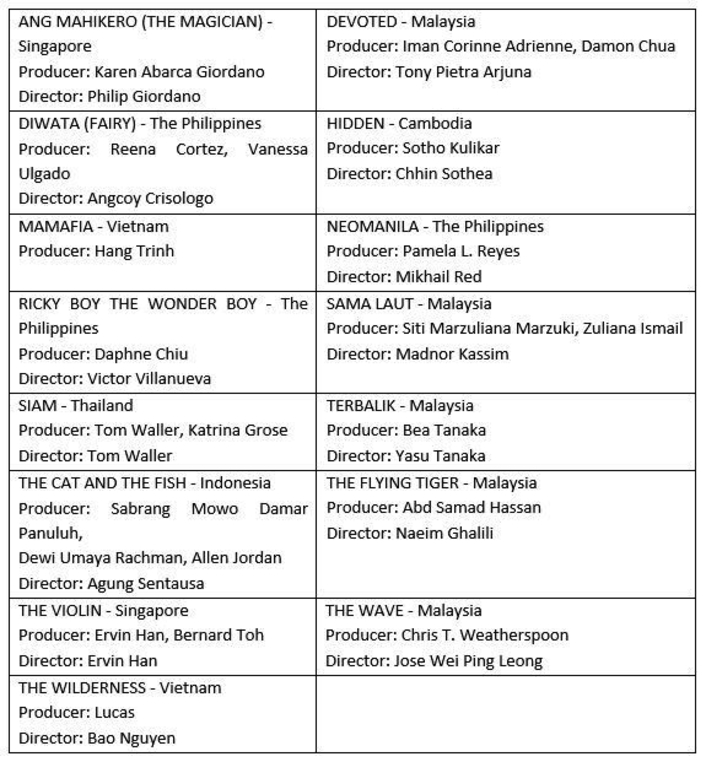 Distinguished international film leaders who handpicked the shortlist and will also be in Singapore to elect the SAFF Project Market 2016 winners are:

ScreenSingapore is co-located with ATF, and is part of the Singapore Media Festival (SMF).