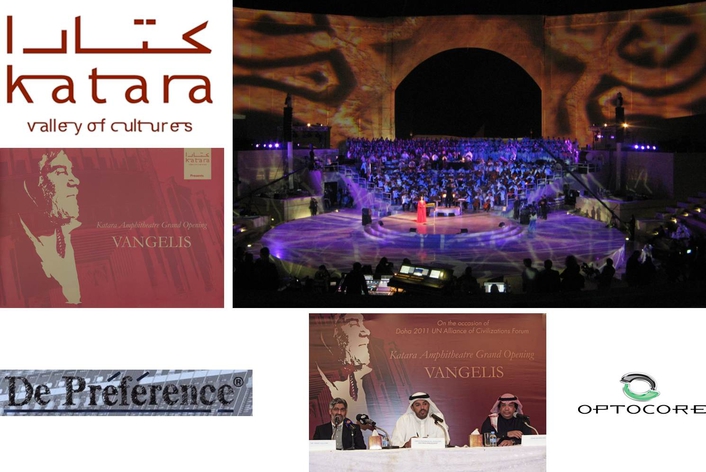 De Préférence provides advanced solution for celebratory work at Katara
An Optocore system has been used by leading French rental company De Préférence for a one-off show by Vangelis, to inaugurate the new Katara Amphitheatre in Doha.

The Greek composer had written a celebratory opus for the grand opening and the Paris-based production company, which specialises in large-scale spectacular events such as this, was tasked with constructing an optical fibre ring using seven of their Optocore and SANE converters to deliver the sound to an audience of 3,000 people.

This required De Préférence, and their 14-strong crew, to construct an elaborate network loop via Optocore fibre and SANE Cat5 Ethernet platforms, using X6R-TP / X6R-FX converters, capable of handling the main and pre-mixes, including the orchestra and chorus premixes from the Yamaha DM2000 desk; at the same time Optocore DD4ME’s were deployed to connect via a MADI bridge to the DiGiCo SD7 FOH desk for recording purposes.

Placed on the network were Yamaha DM2000 digital consoles, one handling the stage recording premix and one sending a chorus premix to the DiGiCo SD7 FOH and monitor consoles (for recording). From the DiGiCo environment the digital signal passed through an Optocore DD4ME Dual MADI network device to the Yamaha DME64 PA processor.

The DD4ME’s interfaced between the DiGiCo SD7 and the Optocore loop (the MADI 1 OUT assigned to the chorus premix between the DM2000 and SD7 consoles, while Madi1 IN was a copy of the DiGiCo stage rack).

An Optocore DD2FR-FX was used as the MADI interface for recording, with two multitrack recorders — one for playback connected directly to the FOH DiGiCo SD7 and one to the Yamaha desk. 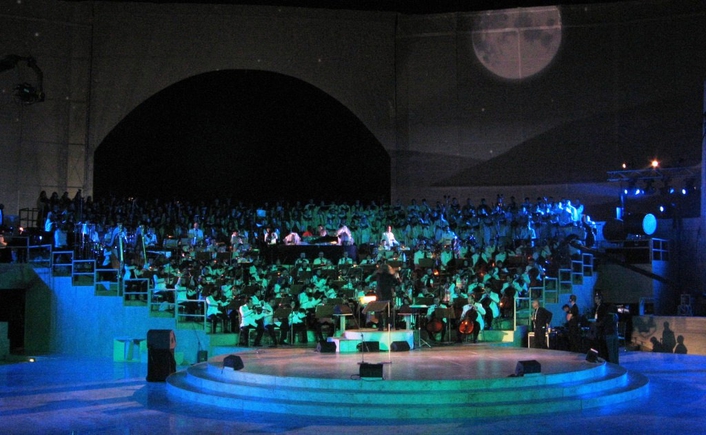 Thus, confronted with the challenge of trying to tame reverberant surfaces, De Préférence were able to send pristine, low-latency Left/Right signals to the clusters of L’Acoustics KARA loudspeaker enclosures, positioned around the amphitheatre, via the 8-In/8-Out Optocore X6R converters; these were also assigned to the intercom, while a 64-input Optocore stagerack serviced the chorus.

Summarised De Préférence’s Dominique Guerder, who handled the project, “The show was a big success. Thanks to our large inventory of Optocore devices we have the capability to construct advanced networks for events of this  scale.”