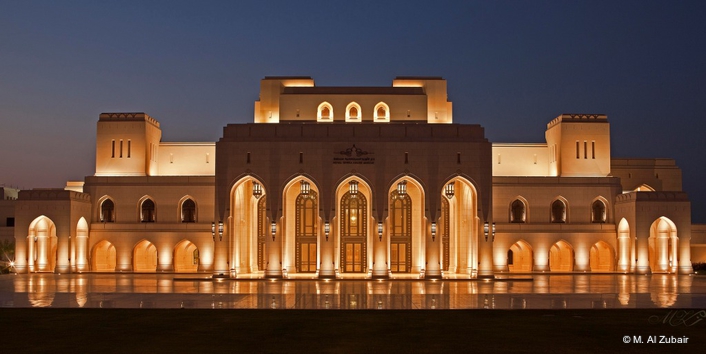 In addition to the main configurable auditorium, the Optocore network extends coverage to the smaller 80-seat studio theatre
Occupying an eight hectare site, the magnificent new Royal Opera House Muscat (ROHM), built at the behest of Sultan Qaboos Bin Said, was officially opened in October. The complex, consisting of a concert theatre, auditorium, formal landscaped gardens, cultural market with retail outlets and luxury restaurants, is an arts centre for musical, theatrical and operatic productions, and has been designed to reflect contemporary Omani architecture.

Despite being classified as an Opera House, the main performance space converts from a theatre setting into a world class concert and organ recital hall.

The technical infrastructure of ROHM has now been further boosted with the delivery of an Optocore optical fibre network system which will enhance connectivity and route signals to the many different performance spaces within the complex. At the same time a MADI bridge will enable recording from the proposed Capture/Production suite whilst using Optocore converters to link with a Midas XL8 front-of-house mixing console.

In proposing the Optocore design, Bruno Silva, one of ROHM’s Deputy Sound and Broadcast Managers (formerly a manager at Kings Place in London), sourced the 20 Optocore components for the network from long-standing UK Optocore specialists, HD Pro Audio.

He is one of three resident experienced sound engineers, who joined the project in September 2010. The remainder of the team comprises Head of Sound and Broadcast, Collin Chivers (formerly a manager at the Royal Opera House Covent Garden) and Joint Deputy Manager of Sound and Broadcast, Mike Compton (formerly a senior sound engineer at the Royal Shakespeare Company, Stratford upon Avon).

Working with the consultants, they modified some of the specifications, adding additional equipment including the Optocore network. “We knew this would boost the sound and video comms connectivity via analogue, optical, video and Ethernet patches,” stated Bruno Silva.

In addition to the main configurable auditorium, the Optocore network extends coverage to the smaller 80-seat studio theatre the terrace, on the roof of the building, the front of house foyer spaces and to the a large outside marbled space (‘Maidan’).

Bruno adds, “The ROHM is Oman’s premier venue for culture and arts, receiving acts from around the world. Its many performance spaces can host many different events and all will benefit from the Optocore ring.”

Headroom has been built into the system so that the Pro Tools capture suite, with a proposed Lawo mc90 desk and video gallery, can eventually be connected to the Optocore network, without the need for an additional stagebox; the network can also be arranged to provide multi-tracking to OB’s. 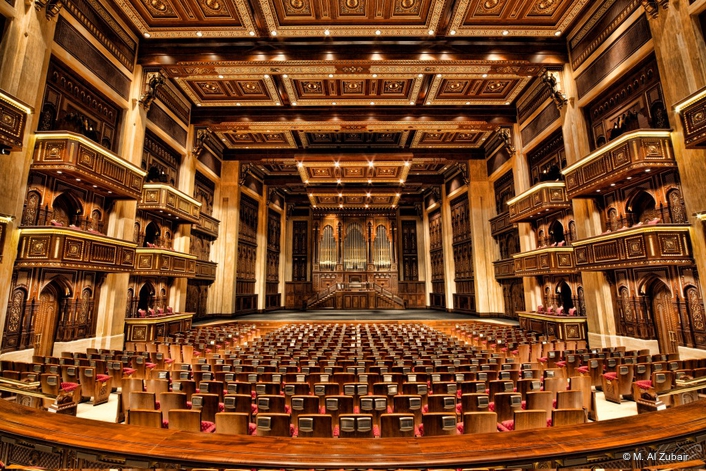 The newly commissioned Optocore solution provides the house with a flexible input and return system. At the hub is a DD32R-FX in the main theatre comms room, offering 32 AES ports with SANE and Ethernet. Providing a much more energy efficient option than its predecessor (the DD32E) the SANE port has allowed the ROHM team to be highly creative, adding analogue channels, Ethernet and MADI-based CAT5 connectivity to the network.

The two main stage racks offer 48 channels, so that one or both racks can be deployed for the orchestra or split across other areas of the building.

The racks consist of four further X6R-FX and CAT5-linked X6R-TP modules, (variously configured 16MI and 8MI/8LO), before outputting to a further X6R-TP (16MI) and X6R-FX (8MI/8LO) on the Terrace stage, connected via an Optocore DD4MR-FX and LX4B FOH network converter, with 48 outputs and 16 inputs at FOH.

Also linked into the digital architecture are the Foyer/Porch, via an additional X6R FX (8MI/8LO), and three rack modules in the Studio Theatre — comprising X6R-TP’s (configured 16MI) and X6R FX (8MI/8LO).

“The whole idea behind Optocore is to enable us to relay audio and record, across the stage areas,” says Bruno Silva. “For instance if we need to put a band into the second theatre we can use the Optocore to connect the multi-channels to the FOH Midas desk using the local Optocore preamps and to also split the feeds simultaneously to the Capture suite and Lawo mc90 desk, deploying the MADI stream of the DD2FR-FX interface.”

Having Optocore running across the building provides all kinds of possibilities, he says. “We can link the signals and relay from area to area, using all available pro audio standards including AES/EBU and MADI.”

The design of the ROHM was a collaboration between a UK based design team, including Acoustic Dimensions and architects WATG, working with the in house interior designers and the client (The Royal Court of Affairs Oman).

At the same time, one major feat, achieved in conjunction with the consultants Theatre Projects, was the making of the main stage and auditorium reconfigurable — adjusting the acoustic space to produce a beautiful sounding seamless concert space.