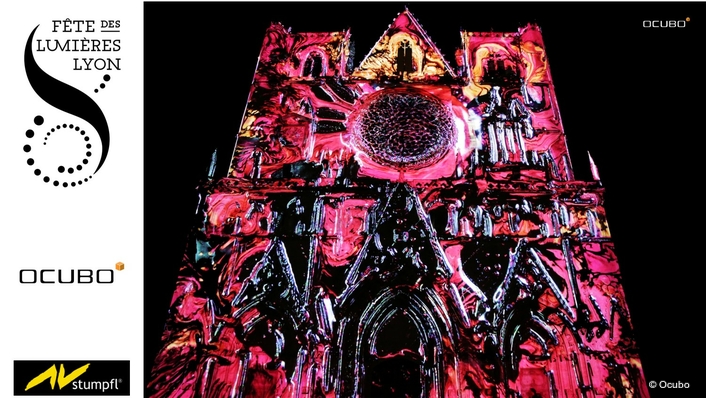 The world-renowned Fête des Lumières in Lyon is an event not to be missed in the vibrant French city’s calendar in early December. The reference name in light festivals, all eyes are on the innovative programme of spectaculars and those who are behind the unforgettable displays of truly unique artistry.

Having first participated in the festival in 2017 with the show Guignol Sur La Colline presented on the facade of the Collège Jean Moulin, Portuguese creative studio and multimedia company OCUBO returned in 2018 but this time took centre stage – engaged to deliver on the façade of the magnificent Saint-Jean Cathedral in the heart of the old city. A true first-of-its-kind, Pigments de Lumière was not only recognised and celebrated by peers, plaudits and the public, but was also the recipient of the prestigious Trophée des Partenaires awarded each year by the festival’s partners to the best artistic showcase. 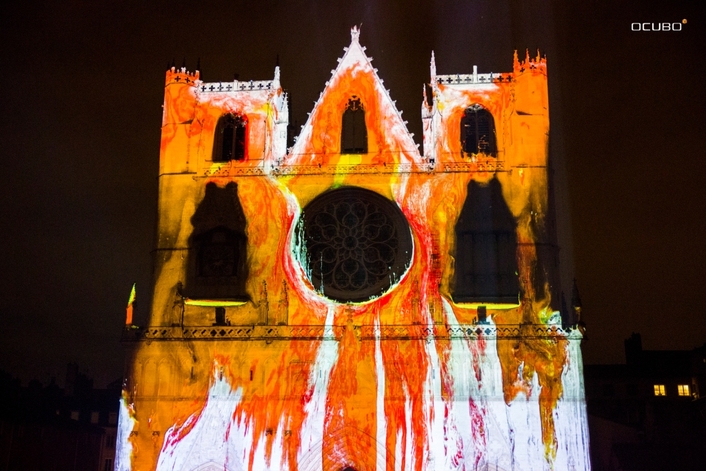 Inspired by a quote from famous author Goethe, who said: "colours are actions from light”, Pigments de Lumière was conceived as an abstract tribute to and celebration of all the colours that make up light, represented one by one through an exciting succession of different effects. The story is told through flowers – nature’s most complete expression of colours - which react to interaction with elements of nature such as wind, water and ice. Starting from a point of reflection – that we always try to create realistic images digitally, but there is nothing more real than reality itself – OCUBO controversially decided on an artisanal approach working in analogue, whereby all the images projected onto the façade were filmed, as opposed to generated digitally. 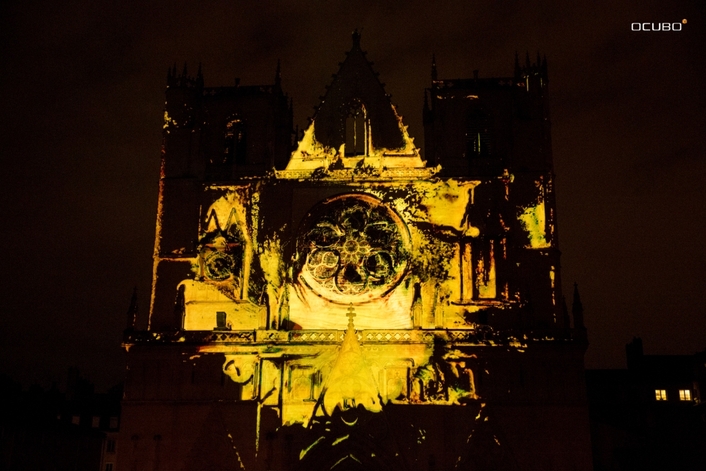 Details Nuno Maya, CEO, artistic director and co-founder of OCUBO: “We knew that creating a show for such an iconic site was a great responsibility and that the project had to be extraordinary – which is what inspired a departure from the classic scheme of our projects down the analogue route. What unfolded is an experimental show with videomapping techniques that explore the aesthetics of two beautiful elements of nature – colour pigments and flowers. Throughout the centuries, flowers have taken on many meanings – symbols of friendship, love, vitality, revolution and freedom for example – with many still holding these symbolic connotations today. The history of pigments can also be traced back to prehistoric times and linked to the need of human beings to express themselves, their stories and their creativity. 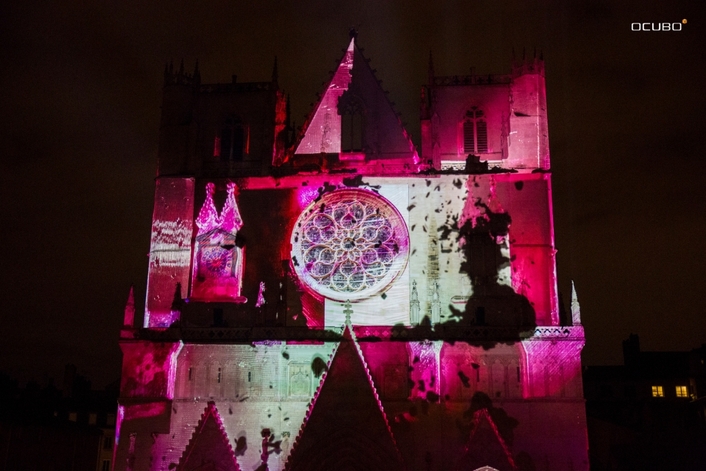 “Using the forces of water and gravity and inspired by colour, movement and fusion of elements, the everyday images of flowers and pigments are transformed into something emotional, poetical and magical. Abstract colours and forms envelop each flower creating dynamic sculptures that enhance the beauty of the flowers themselves while interacting with the building architecture through analogue visual effects and experiments.” 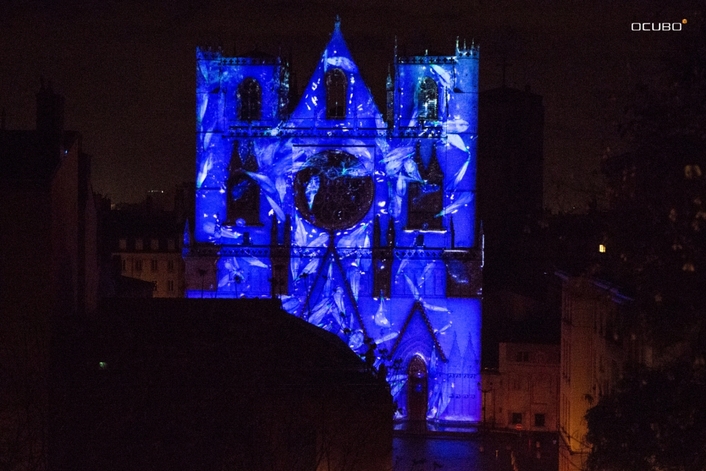 The technical set up which delivered this powerful creative concept featured 12x Christie 20,000 lumens WUXGA laser projectors, with three brand new AV Stumpfl PIXERA one quad server clients controlled by a fourth one acting as a master. Calibration was ensured by VIOSO's camera based system, while an RME Fireface UC external audio interface was used for audio playout and to send SMPTE LTC time code to control and sync a laser plus a number of small lights. Two-line arrays each consisting of 3 T12 active speakers from dB Technologies coupled with a SB30 sub ensured the audio delivery to the crowd. 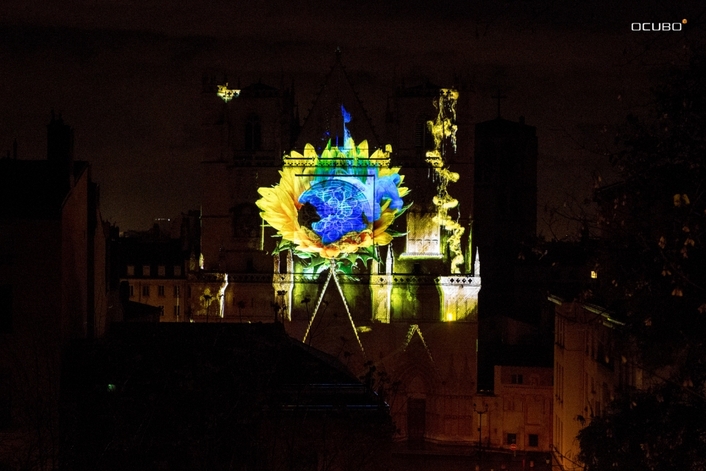 Arguably the very heart of the show was the PIXERA suite of software and media servers – officially used for the very first time at the Fête des Lumières. Awarded Best Debuting Project at LDI’s Live Design Awards and an additional product award at the InAVation Awards 2019, the PIXERA suite of media servers and software boasts a radically different and user-friendly interface that sets it apart from the crowd.

Both PIXERA one (1U model) and two (2U model) can play back uncompressed 4K at 60fps; feature many a la carte options for specifying hardware components, and support Flex technology. 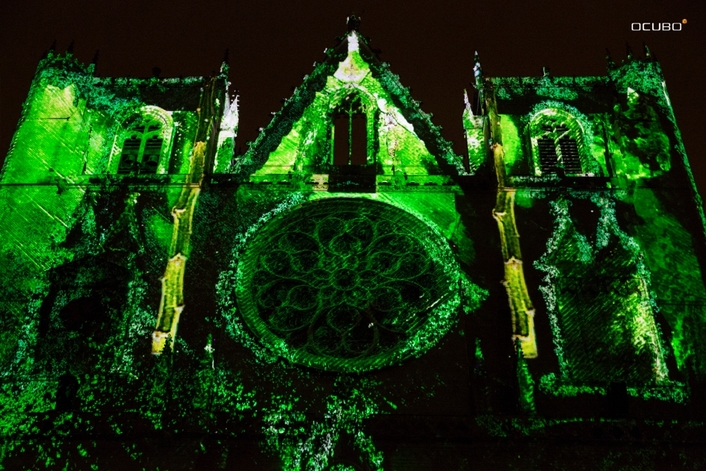 AV Stumpfl’s project manager and trainer, Florian Eder, expands on how PIXERA enabled this unique showcase: “This project gave us the opportunity to prove our revolutionary graphical user interface concept, which is built around the key theme of usability, and show that it works as part of a complex and prestigious project such as this. The feedback from international projection mapping experts like OCUBO is of great importance as we are committed to a roadmap of continuous development – their input helped us to understand better which additional features should be prioritised.” 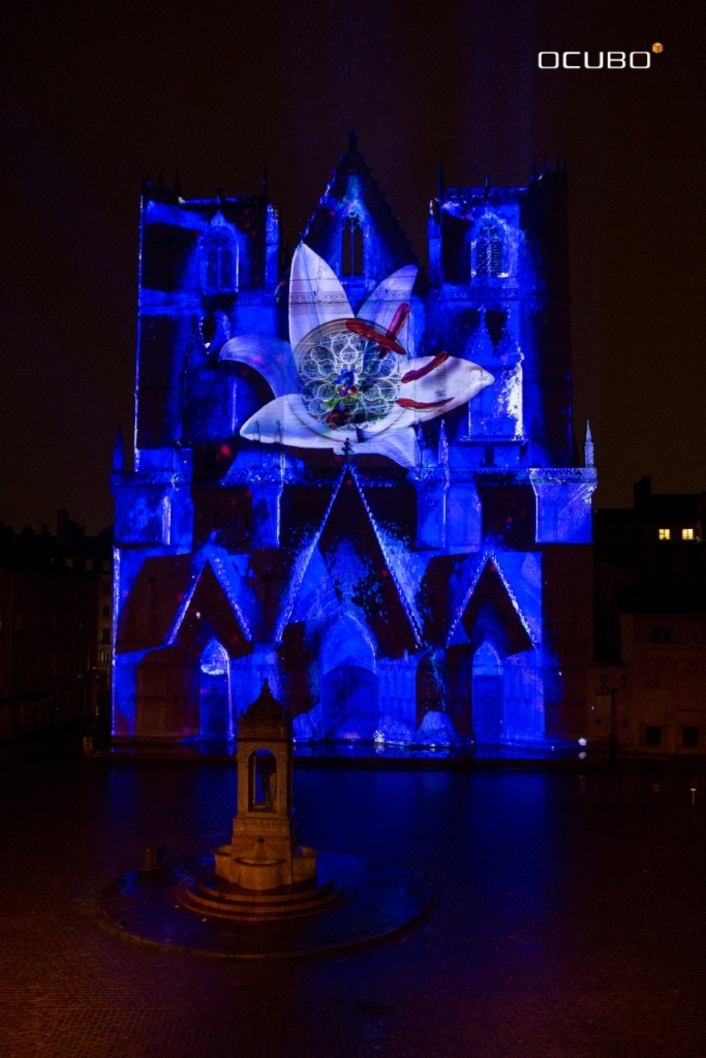 Maya discussed the impact that PIXERA had on the delivery and execution of the project: “I believe that PIXERA really is a game changer for us and indeed the industry – a revolution in the media server market with huge potential. It gives us the means with which to recreate an accurate show of any size, even in our studio, and ensure we have the best set up possible for every eventuality. With PIXERA, we can quickly set the event up on location and react quickly to any unforeseen real world changes or adaptations which need making to a project. 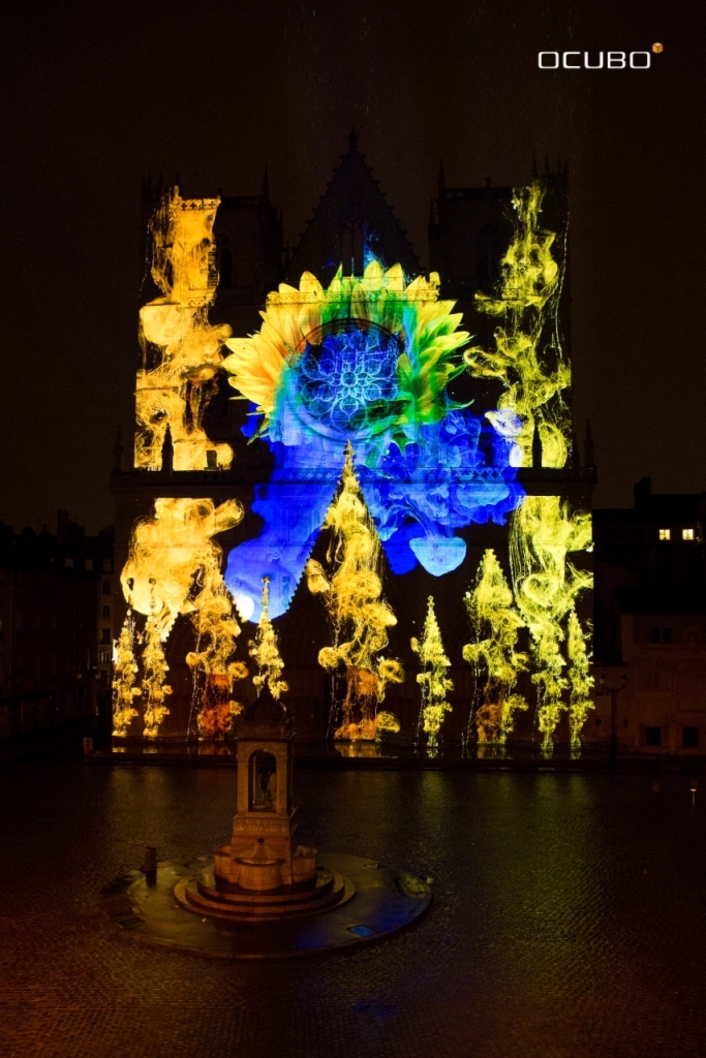 “One of the most important features is that the software can show the project using 3D objects, and allows to adapt the film according to the 3D building and the position of the projectors in the space. I also can’t speak highly enough of its ease of use and how intuitive it is. With six shows to deliver every hour, over the four-day duration of the festival, we needed to have 100% confidence that our technical set up was robust and flexible enough to cope with those demands. Having worked alongside the AV Stumpfl team and with its products for some time now, there was never any doubt they were right for this job. 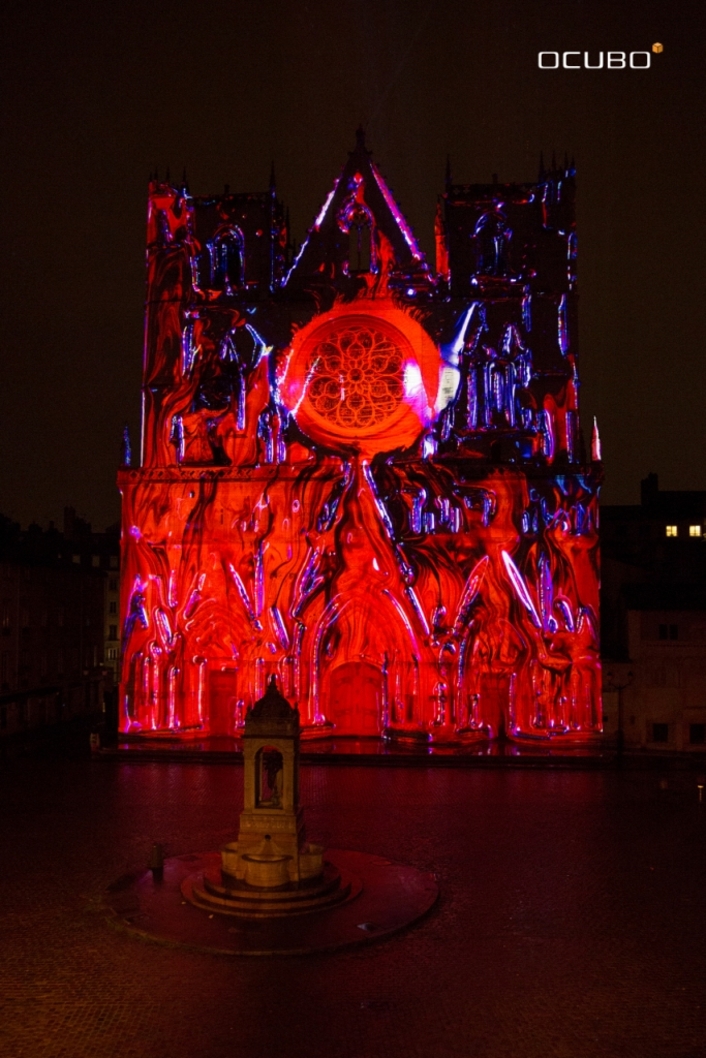 “Our technicians were very satisfied with its performance. Partnering with AV Stumpfl, we felt they were standing with us side by side to ensure that PIXERA was perfectly suited the project and running smooth as silk. It was such a great experience that we intend to implement the use of the software in our workflow.”

Evidenced in the award win, the festival organisers were also suitably impressed with the show. Emma Violy, production assistant for the Fête des Lumières enthuses: “The show had incredible feedback, from the public, press and fellow artists. Saint-Jean is one of the key locations in the festival programme with high expectations attached to it. In my opinion, this project not only met but exceeded those expectations. It was extremely impressive, both technically and artistically.” 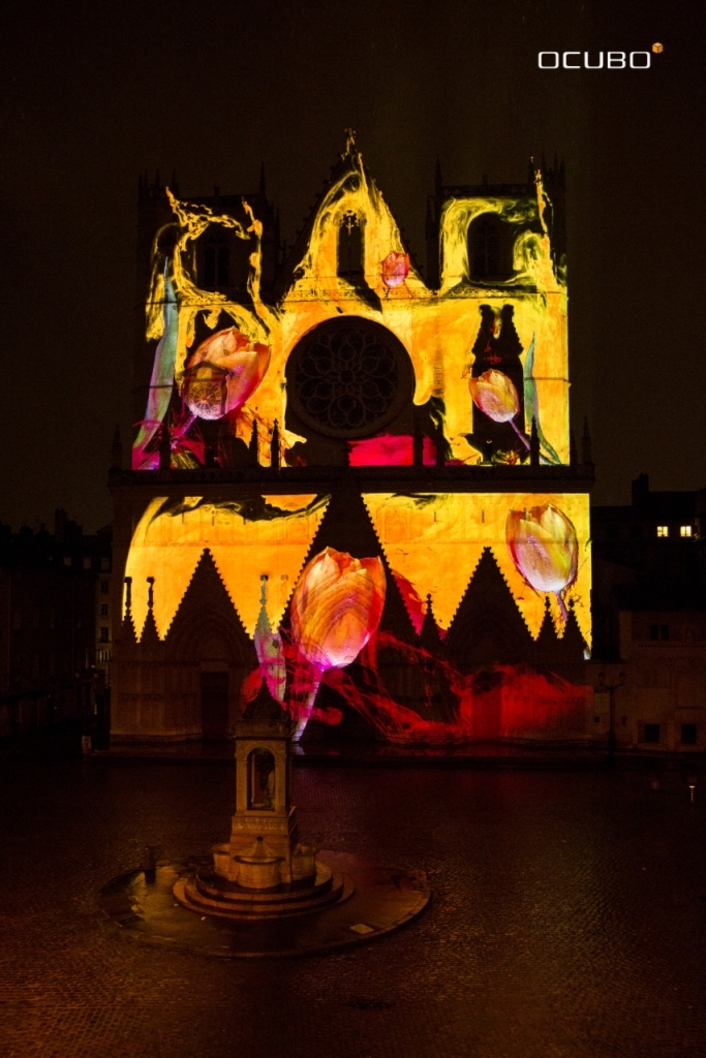 Concludes Maya: “Participating in a world-renowned festival like the Fête des Lumières, and being recognised on this level, is a very rewarding experience for the whole team. It is thanks to AV Stumpfl’s PIXERA that we could deliver at this level. We really enjoyed working with them and with the new suite, and we’re excited to use this new system on future projects so that together we can continue to push the boundaries when it comes to projection mapping.”