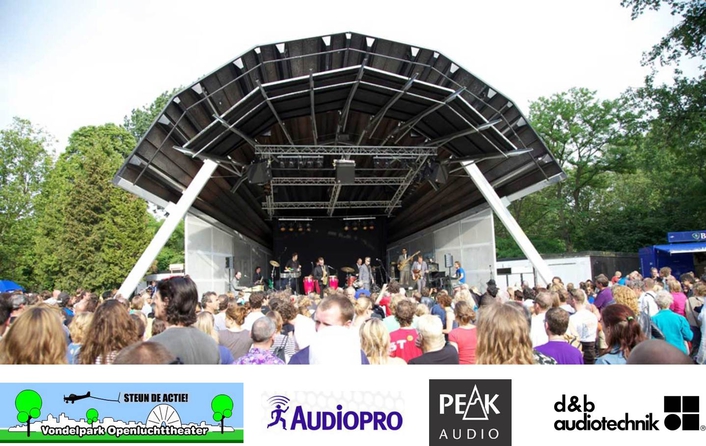 In collaboration with the Amsterdam based audio rental company Peak Audio, Dijkstra provided a comprehensive system design
Since the industrial growth of urban sprawl first began in the middle of the nineteenth century, the civic park has been recognised as a vital part of city dwelling; a place to rest, recuperate and indulge in some much needed recreation. Vondelpark, just to the south east of the old city centre, is perhaps the most cherished of parks in Amsterdam.

Originally laid out in 1864 and now stretching over an area of some forty five hectares, the park boasts serene stretches of water landscaped with trees, gardens and meandering pathways which lead the visitor to the Blauwe Theehuis (Blue Tea House), a haven for refreshment and conversation since 1937. It wasn't until 1974 that the Openluchttheater (Open AirTheater) was built nearby to provide a venue for both musical and dramatic entertainment and, every summer since then, free events are staged, attracting large and loyal audiences whatever the weather. However, what was once a civic space near open countryside has now become a park surrounded by the city itself and therein lies the problem. Amsterdammer Rolf Dijkstra, the Managing Director of  Netherlands based sound company Audiopro, was more than a little concerned when he learned that local residents had initiated legal proceedings to ban acts using amplified sound reinforcement in the park.

Dijkstra's passion for live music was first ignited as a boy spending Sunday afternoons at the Theater with his parents; this was a formative experience that was in danger of being denied to future generations of Amsterdammers and their families. He needed an answer to the question: how does the Openlucht continue to offer musical entertainment in its modern, amplified format without disturbing the occupants of the surrounding villas and apartments? "To me the Open Air Theater is an integral part of the park and most certainly part of my own youth; I would really hate to see the free performances stop as it would exclude so many people from experiencing the joy of live performance. I wanted to design a loudspeaker system that would deliver the goods to the audience without spilling over and irritating the neighbours. As we represent d&b audiotechnik in the Netherlands and have worked with them on such a variety of projects I knew immediately that a d&b loudspeaker system would be the perfect option. We set the whole PA up with d&b's ArrayCalc software following a precise EASE model and the results have more than justified our choice." 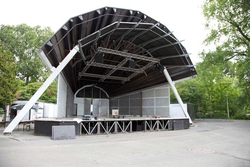 In collaboration with the Amsterdam based audio rental company Peak Audio, Dijkstra provided a comprehensive system design comprising a combination of C-Series C7-TOPS with B4 cardioid subwoofers under stage, all driven by d&b D12 amplifiers. "The B4s are placed as a calculated bass array with distances and delay times defined according to the simulation made in the d&b ArrayCalc software. Both EASE and ArrayCalc were used to come to an optimum result where the total opening angle of the system is small enough to keep the bass only in the park, directed at the listeners and wide enough for every visitor to have good intelligibility combined with a punchy low end."

Peak Audio's Managing Director, Will-Jan Pielage explains his involvement, "The Park, the venue and the summer events are a unique part of our city and, as Amsterdammers, we have agreed to sponsor the d&b system for the next two seasons as we are that confident about the quality and accurate coverage of the loudspeaker system.”

The kick off for the new season was on 5th June with guest band, The New Cool Collective. Despite SPL levels of nearly 100 dB at the FOH mixer position there were zero complaints from any of the neighbours who were able to enjoy a quiet and peaceful Sunday afternoon. Meanwhile, just across the road Vondelpark visitors were able to revel in the cultural delights of free live performance in the green and leafy space so beloved of Amsterdammers for the last one hundred and forty seven years.