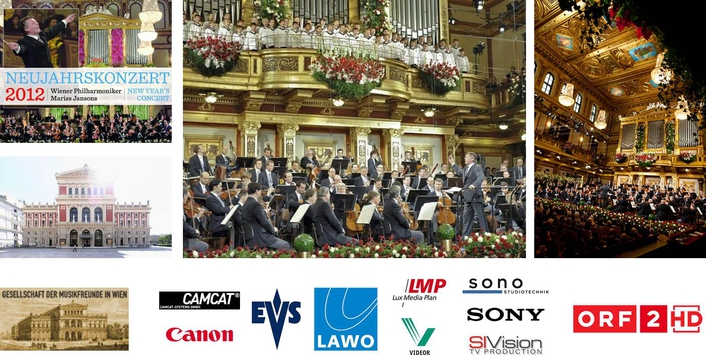 New Year's greeting in the spirit of hope, friendship and peace
It has long been a Philharmonic tradition at the New Year to present a program consisting of the lively and at the same time nostalgic music from the vast repertoire of the Johann Strauss family and its contemporaries. These concerts not only delight the audiences in the Musikverein in Vienna, but also enjoy great international popularity through the worldwide television broadcast, which is reaching an audience of more than 50 million spectators in 73 countries.

Mariss Jansons has conducted this year‘s New Year’s concert of the Wiener Philharmoniker and Karina Fibich directed the live broadcast which was covered in HD with 17 cameras and in Dolby Digital 5.1 surround sound. ORF production manager Johannes Hoche had hired Imre Sereg, Managing Director of SIVision to overlook and manage the whole technical installations and workflows. It was the sevenths New Year’s concert where Sereg was responsible for the technical part of the production and again it worked out flawless. 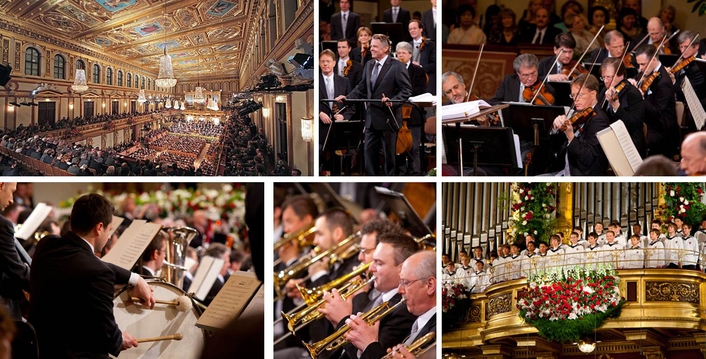 Even if the production of the event is a living tradition since more than half a century, ORF has to reinvent the broadcast of the event every year in a new way. Only then it is possible to bring the incomparable atmosphere of the most famous concert of the world to the millions of TV viewers around the plnet and make it tangible. Thanks to an excellent team, best of bread technology and good cooperation between all the partners, the New Year’s concert – which was garnished with live ballet performances from the “Oberen Schloss Belvedere” – again was an incomparable cultural highlight for the audiences at home. 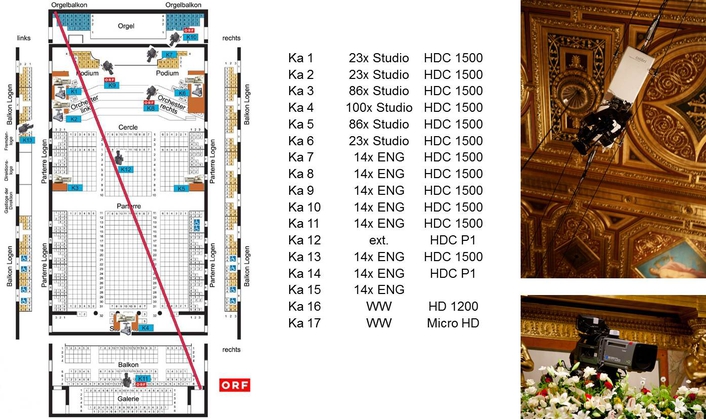 With a total of 17 cameras in the “Goldener Saal” – including for the first time a CamCat-colibri, a rope camera running below the ceiling diagonally from the gallery right up to the organ left – and another eight cameras for the three live ballet performances from the “Oberen Schloss Belvedere”, performed by the “Wiener Staatsballett” – the two and a half hours program achieved its high quality goals.

In addition to the premiere of the CamCat-colibri (equipped with a Sony HDC-P1) we also saw two HD1200 finger cameras from LMP positioned around the conductor. The other twelve cameras were Sony HDC-1500 all equipped with Canon lenses (six with box style lenses including three 23x, two 86x and one 100x). The live mixing by Karina Fibich was performed on a Sony MVS-8000 and for the first time the whole recording was carried out tapeless on two EVS XT2 servers, controlled by an EVS IPDirector. The recording format was 1920 x 1080i on ProRes 422 HD at 120Mb. The “tapeless” premiere was supervised by Enrico Ganassin. The audio mix in Dolby digital 5.1 surround sound was achieved with a Lawo mc²66.

The live insertions of the three ballet performances from the “Oberen Schloss Belvedere” were produced with the HD OBVan from ORF. A temporary production set was installed next to the ballet room in addition to the production area in the HD OBVan. For the recordings of the ballet we saw Ikegami cameras all equipped with Canon lenses. 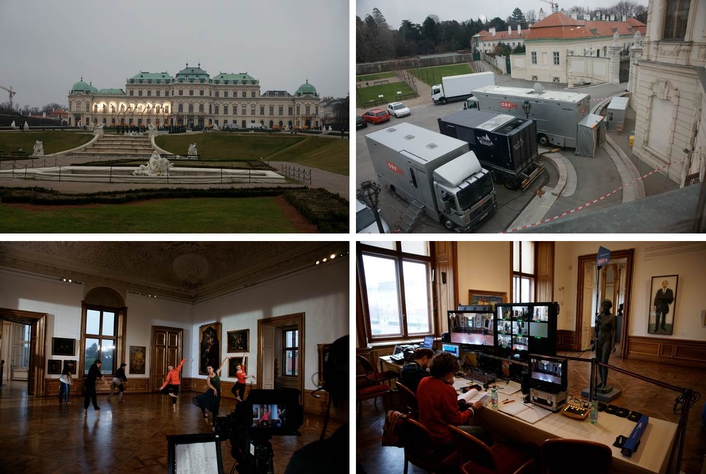 The TV live signal was also distributed to the “Hölzerne Saal” within the building of the Musikverein and screened to special guests from ORF by using a Sony  HD Beamer and a TVLogic 46” display (delivered by Videor).

For the transmission of the whole event to Japan a special setup with embedded discrete audio was implemented for NHK. It consisted of two (main and backup) Harris X85 video and audio platforms which were delivered from sono Studiotechnik.

Originating during a dark period of Austria's history, New Year’s concerts were initially conceived for a local audience as a reminder of better times and a source of hope for the future. Today millions of people throughout the world are similarly encouraged by the light-hearted yet subtly profound character of this music, and draw joy and optimism for the New Year ahead.

It is the desire of the Philharmonic not only to provide musically definitive interpretations of the masterworks of this genre, but at the same time, as musical ambassadors of Austria, to send people all over the world a New Year's greeting in the spirit of hope, friendship and peace.