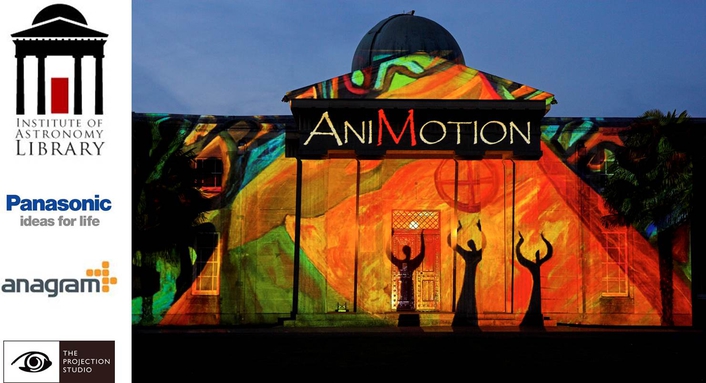 It was the world-wide launch of this concept, complete with live music from flautist David Heath, vocalist Fay Fife and DJ / producer Dolphin Boy (Andy Levy).

The one off event also coincided with the launch of the 2014 e-Luminate Festival in Cambridge - which in February will celebrate the fusion of lighting and technology to show the city literally ‘in a different light’ - with a fundamental emphasis on eco-sustainability. 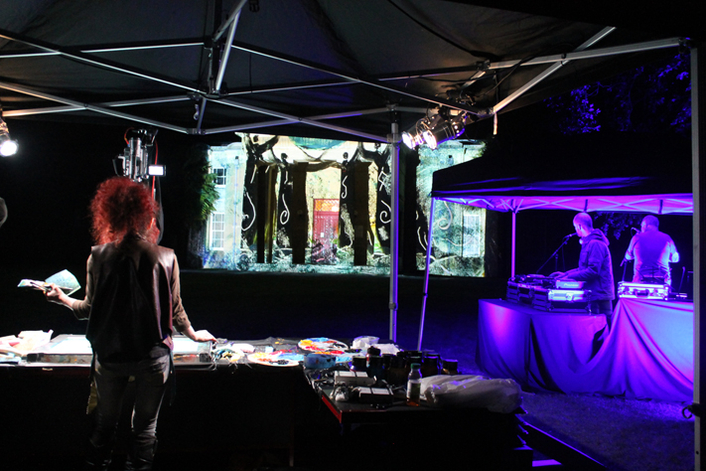 Ashton was approached by Rud, who had heard about his work and wanted to take AniMotion to a different level.

Ashton immediately saw the potential of her painting live onto buildings via projection, bringing the specific texturing of real materials and genuinely hand-painted 3D images to cover a surface, plus the raw emotion and edge of images unfolding in front of the audience’s eyes.

“I am hugely excited about the possibilities – this is a completely new style of live art,” says Ashton, adding that the “…analogue quality and rich texturing brings great depth and detail to the work that engages on many levels … and looks absolutely spectacular!”

Rud paints directly onto a light-box. Ashton has devised a way of mapping the building architecture, which he then gives her as her canvass.

“As soon as we started to discuss the process,” says Ashton, “I knew that I could make this work and give Maria the freedom she needed to create her art. It has been a very satisfying intellectual journey and I think that the results speak for themselves. Nothing is hidden, the audience are encouraged to watch the painter as she develops and redevelops the work.”

Before the live show, Rud was able to try out a number of ideas and establish which ones worked the best with the building details and features. They discussed the colour palettes she might use in advance, but on the night, the creation of the final three works rested almost entirely on improvisation.

During the show, the painting surface is evenly top lit and a mini-cam placed directly overhead, the output of which is fed into a laptop running Millumin  - a software originally developed for VJs which can also edge blend, map and has a number of other useful and cool functions. This was fed via the DVI out to a single Panasonic DZ 21K WUXGA projector. 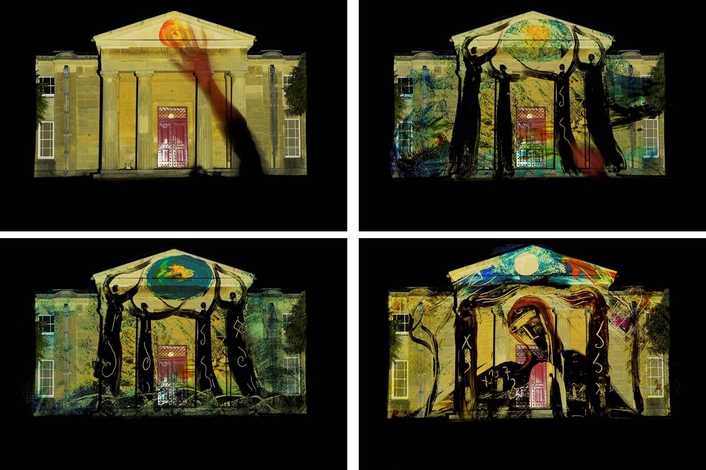 During the show, the painting surface is evenly top lit and a mini-cam placed directly overhead, the output of which is fed into a laptop running Millumin  - a software originally developed for VJs which can also edge blend, map and has a number of other useful and cool functions. This was fed via the DVI out to a single Panasonic DZ 21K WUXGA projector.

The use of live music added synergy to the piece and for ‘Dark Matter’, Maria collaborated with the three Edinburgh based musicians who composed three pieces of music - ‘An Improvisation on Debussy’s Syrinx’ by Heath; ‘The Sound of Sleat’ by Fife and Levy, and ‘Dark Matter’ performed by all three.

Says Rud, “By uniting music and painting through the art of projection, AniMotion immerses its audiences in a world of transcendence.  By dissolving boundaries between art forms you reveal a whole new world and in the process … a new art form.”

Panasonic sponsored the event, supplying both the projector and the camera – and are also a major sponsor of the e-Luminate festival.

Locally based technical solutions provider Anagram supplied all the other technical production, which included lighting and the sound system.

The building – the library of the Institute of Astronomy - provided a fantastic setting, and after this success, it is hoped to be able to produce another AniMotion work on a different building for e-Luminate 2014 – of which Ashton is the Creative Director.