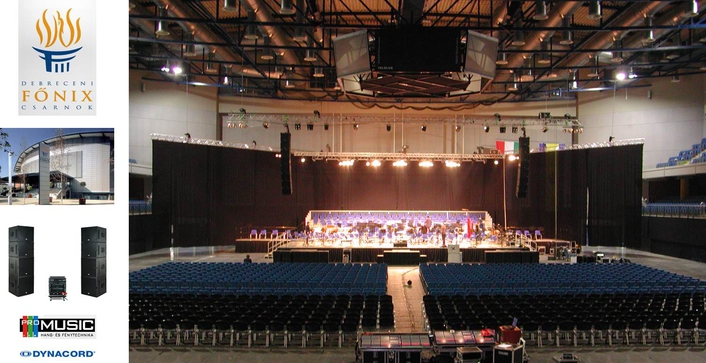 DYNACORD enclosures reinforced a recent performance of Mahler’s Second Symphony in the 8,500-seater Phoenix Hall
The Phoenix Hall in the Hungarian city of Debrecen was the setting for a recent major musical event: a performance by the Kodály Philharmonic Orchestra, the Kodály Choir Debrecen and students of University of Debrecen’s music faculty, under the direction of the world-famous Japanese conductor Ken-Ichiro Kobayashi, of Gustav Mahler’s Second Symphony. In all during the performance, there were over 240 musicians on stage.

The task of providing sound reinforcement for the event was entrusted to Pro Music Hungary of Debrecen, who deployed a DYNACORD COBRA-4 line array for the occasion – the largest concert sound system of its kind in Hungary. “In view of the sheer size of the hall, this event represented a considerable acoustic challenge,” says Zsolt Nagy, sound system engineer and owner of Pro Music Hungary. “It was our aim to offer the audience, despite the size of the system, a faithful reproduction of the natural sound of the orchestra. The loudspeaker arrays were therefore arranged in three clusters, with different EQ applied to each. We also had to be careful that the subwoofers did not cause the stage to vibrate.” 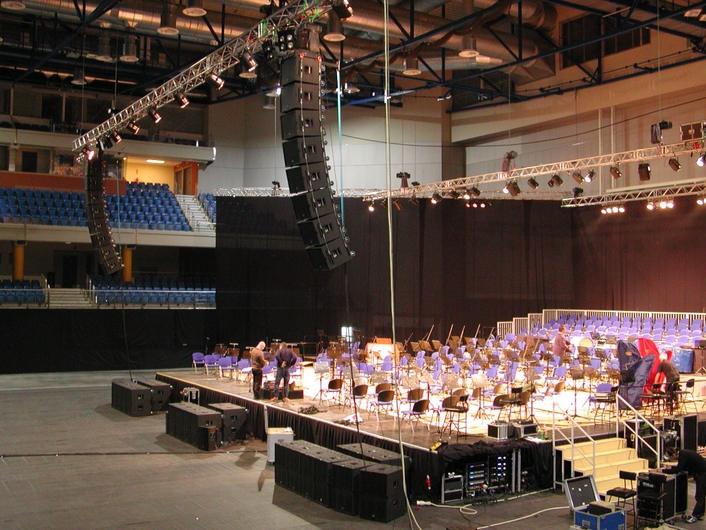 In the realisation of these objectives, the N8000 NetMax controller from Electro-Voice once more played an invaluable role, providing signal processing, equalization of the arrays, and analogue/digital conversion. From the controller, the signal was transferred via AES/EBU to the RCM-26 modules of the power amplifiers in which FIR filters were brought into play for the loudspeaker processing. “To prevent the bass spilling back onto the stage, we opted for a cardioid setup, with sixteen COBRA PWH units in an L-C-R configuration and a further eight COBRA PWH subwoofers behind,” adds Nagy.

From the front truss above the stage, eight COBRA-4 array elements were flown on each side. To provide near-fill for members of the audience sitting in the centre of the front rows, these were complemented by two Madras M15 powered speakers. The system was controlled from two laptops: one connected via a CAT5 cable to the N8000 NetMax controller and functioning in the role of host computer, and the other connected via wireless to the host. “This second laptop allowed us to move freely about the hall as we were conducting measurements and tuning the system,” explains Nagy. The enclosures were powered by amplifiers from DYNACORD’s PowerH series as well as Tour Grade power amplifiers from Electro-Voice. EV microphones also made their contribution to the great occasion, with something like fifty of them – including twenty RE510, twelve N/D468 and eight RE200 – on stage to capture the performance.

It was a convincing solution, and Nagy and his team were gratified to learn that not only the organizers but also Ken-Ichiro Kobayashi himself were delighted with the performance of the sound system.

Impressive show: more than 240 musicians shared the stage under the direction of Ken-Ichiro Kobayashi in Debrecen, Hungary