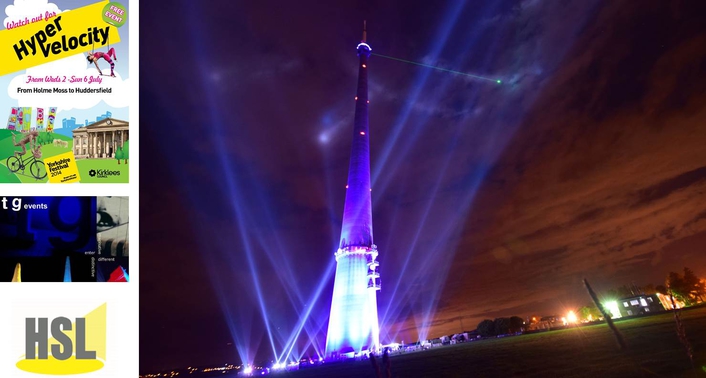 Inside the Mast’s control room, which is 274 metres off the ground, were ten Sharpies and 20 Color Force 48s
Leading UK lighting and visuals rental specialist HSL supplied equipment for a bold, vibrant interactive lighting installation work - ‘Control t’force’ – created by Lighting Designer James Bawn, that illuminated the 330 metre high Emley Moor Mast in west Yorkshire UK, which is the tallest freestanding structure in the UK, an iconic local landmark and the main UHF transmitter for most of the county.

Specially commissioned by TG Events on behalf of Kirklees Council as part of ‘Hypervelocity’, the 5-day grand final of the 100-day 2014 Yorkshire Festival, the Control t’force project which ran over two evenings, also celebrated the start of the 2014 Tour de France cycle race in Yorkshire. During this festival lighting designer James Brawn illuminated the Emley Moor Mast as well as the Victoria Tower at Castle Hill.

To establish the exact kit needed and its optimum location for the 360 degree illumination designed to make the tapered reinforced concrete tower shine like a giant light-sabre visible for miles around, HSL supplied some sample fixtures and helped conduct a series of site tests. After this process was complete, James finalised his lighting plot. HSL kindly lent Mr. Bawn a couple of fixtures to test earlier on in the year to ensure he got the coverage he wanted. Finally he distributed 14 FALCON 6000 CMY fixtures around the base of the mast on seven stages. Each stage was 16 x 4ft. All the fixtures on site were controlled via a Jands Vista S1 lighting console. 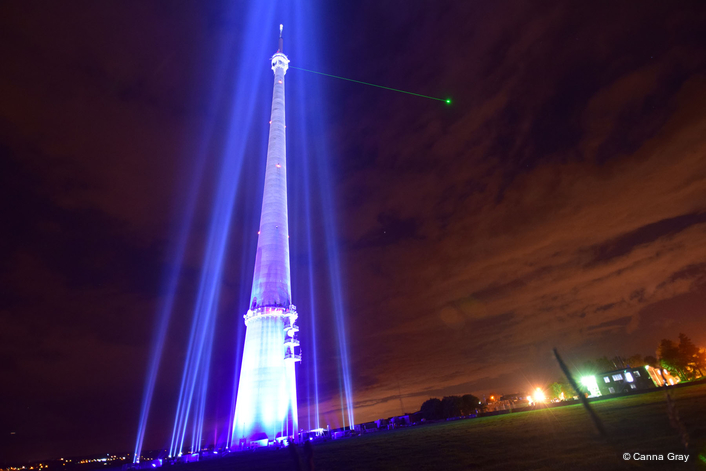 “Having used the Falcon fixtures before I was more than happy to specify them again. The tower is 330m so I knew that the fixture had to more than capable of delivering enough lumens at the top.” refers lighting designer James Bawn. He also used three FALCON BEAM colour 3,000W at the top of Castle Hill as part of the same 'Hypervelocity Festival'.

James has been involved in some previous architectural lighting projects for the council and when his ideas for lighting the Emley Moor broadcast transmitting station Mast (currently owned by telecommunications and broadcast transmission company Arqiva) received the green light, he immediately turned to Simon Stuart and Mike Oates at Blackburn-based HSL to provide the equipment and additional expertise.

Says Simon Stuart, “We were really excited to be involved and to help James realise such a stunning and inventive idea that made history as the first time the tower has ever been fully lit … and was enjoyed by so many people!”

This enabled people to request their favourite colours when the installation was live each night with James tweeting back as he changed the colours. The most popularly requested colour for Control t’force proved to be yellow – for the leader’s shirt of the Tour de France – closely followed by blue and pink! 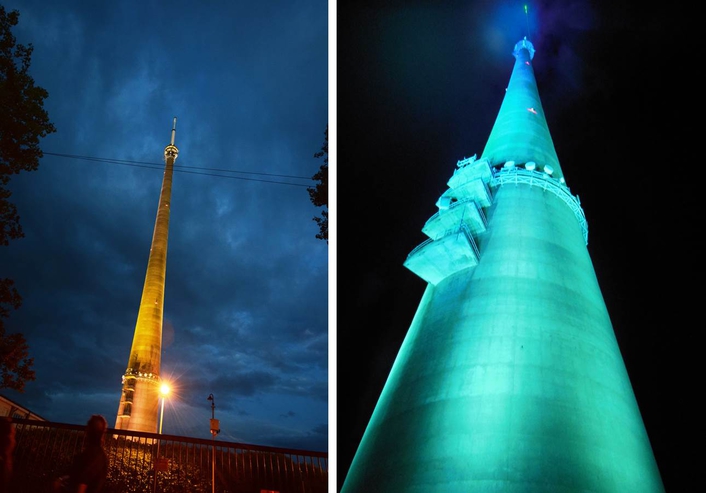 On the first evening, #lightthemast was the fourth most popular trending topic in the UK inciting a phenomenal reaction that also sent thousands of people flocking to the location a mile west of Emley in Kirklees … to engage in the experience first-hand.

To establish the exact kit needed and its optimum location for the 360 degree illumination designed to make the tapered reinforced concrete tower shine like a giant light-sabre visible for miles around, HSL supplied some sample fixtures and helped conduct a series of site tests. After this process was complete, James finalised his lighting plot.

Seven separate Steeldeck platforms – also supplied by HSL - were erected in a radius around the Mast approximately 20 metres away from the structure and each 20 metres apart. James also energised his best diplomatic skills in persuading the local farmer to embrace the project and let him locate some of the platforms on his land!

On each platform was an array of searchlights and a CitySkape Xtreme. On the floor directly in front of the platforms was another Falcon 6K and two more CitySkape Xtremes – all of them firing at the tower.

Inside the Mast’s control room, which is 274 metres off the ground, were the ten Sharpies and the 20 Color Force 48s, arranged so light bounced off the celling and was clearly visible through all the windows. On the roof of the control room a 30 Watt RGB laser was rigged and could be seen from miles around.

These fixtures were all controlled from the production platform set up in the field below via the fibre backbone, which would have been impossible to achieve it any other way. 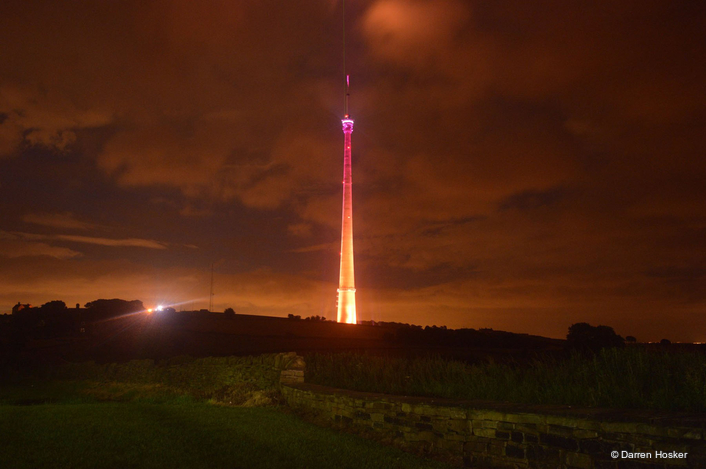 Says James, who also works for sales and distribution specialist A.C. Entertainment Technologies (AC-ET) Ltd. in Leeds, “As always it was fantastic working with HSL – the service and equipment was fantastic, nothing was too much trouble, we had an excellent team who all worked extremely hard to ensure that the event was a massive success”.

He also says a big thank-you to Arqiva and Tim Garbutt from TG Events for their co-operation.

The most popularly requested colour for Control t’force proved to be yellow – for the leader’s shirt of the Tour de France  – closely followed by blue and pink!

About Emley Moor Mast
Emley Moor has been a transmission site since the earliest days of TV, and the original 135 metre lattice tower was erected on the site in 1956 to provide ITV broadcasts to the Yorkshire area.
Work on the current 330.5 metre concrete tower build began in 1969 and it became operational in 1971 as the third transmission structure to occupy the site after the original lattice tower was dismantled in 1966 and its replacement 385 metre cylindrical mast collapsed in 1969!
The control room at 274 metres has a further 56 metres of antenna structure above. It’s the tallest self-supporting structure in the UK and gained Grade II listing in 2002.
Still predominantly referred to as ‘The Emley Moor Mast’ it is a much loved local landmark … and broadcasts six digital TV multiplexes, three digital radio ensembles and two independent radio stations over approximately 10,000 Kilometres.

HSL Boosts Show-Stopping ...Performance at Sonisphere
A Date with You Me At Six
Getting Crowds Closer to ...on of 'Le Tour de France'