.
On the 7th September 2013 maestro Zubin Mehta and the Bavarian State Orchestra hosted a landmark event in the foothills of the Himalayas in the town of Srinagar.   Srinagar had not witnessed any official form of cultural activity since a cricket match in 1983, making this one of the most eagerly anticipated concerts in recent times.  Zubin Mehta is the Music Director for Life of the Israel Philharmonic Orchestra and main conductor for Valencia’s Opera House.  Nearly 2,000 guests attended the event, hosted by the German Embassy in the Shalimar Gardens in Srinagar.

It was the lifelong dream of Zubin Mehta’s to perform in the beauty and serenity of the Shalimar Gardens.  The garden is over 500 meters in length with natural waters running through the garden and then entering into the famous Dal Lake.   A nineteenth century Mughal house was chosen as the backdrop, providing many additional challenges with the stage needing to be constructed across many different levels for the orchestra.  Sound and Light Professionals (SNL Pro) debuted their brand new L-ACOUSTICS K1 rig for this historic event.

The main array only had to cover 65 meters as the concert was for a very select audience. When the final venue layout was decided upon for this event it was sent to System Engineer, Bruce Rodericks, who used SOUNDVISION to predict the required inventory.  Two K1-SB were flown either side in throw mode over 6 K1, and 2 SB28’s either side with three pairs of L-ACOUSTICS 115XT HiQ as front fills, were all that was required to achieve an even coverage for the outdoor location. Four LA-RAKs powered the system with 3 LA8’s in each controlled by the LA NETWORK. 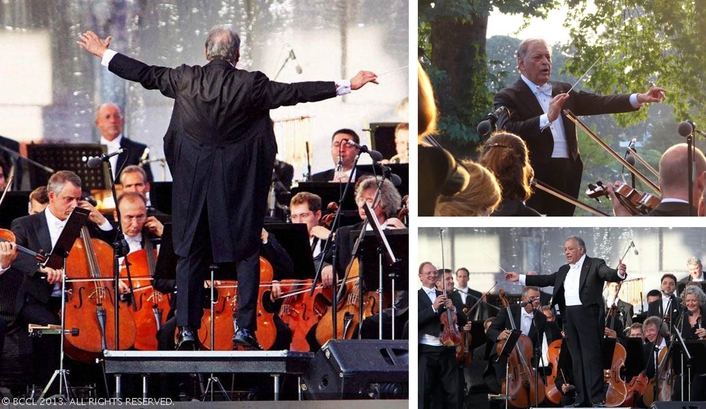 Jakob Palfrader, the front of house engineer for the Bavarian State Orchestra, was very pleased to see the L-ACOUSTICS K1.  A last minute surprise addition to the event was a group of Kashmiri Musicians’ who joined the Bavarian State Orchestra on stage and delivered an unforgettable fusion performance called Haftrang which was only rehearsed one day prior to the show.

Once the orchestra performed in its full glory conducted by the maestro Zubin Mehta it was a truly magical evening and one of the many landmark events that the SNL Pro team is proud to be a part of.  The concert was televised live in 32 countries, live streamed in YouTube and filmed in HD for a future concert DVD.

Founded in 1984 by Dr Christian Heil, L-ACOUSTICS is a leading innovator and manufacturer of high-performance loudspeakers, amplifiers and signal processing devices for touring and installed sound markets. Known around the globe for pioneering and championing the modern line array loudspeaker concept with V-DOSC, the company has received numerous accolades for its K1, KUDO, KARA, KIVA, ARCS, XT coaxial loudspeaker systems and SB line of subwoofer enclosures, all powered and processed with the LA4 and LA8 amplified controllers in fulfillment of a "total system approach."