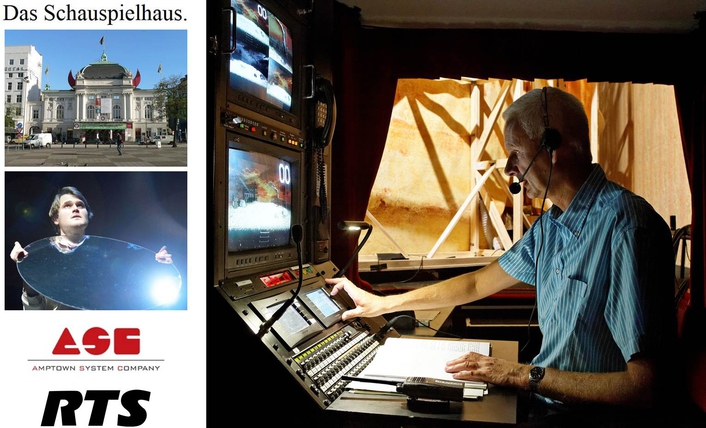 Bird’s eye view: Stage Manager Olaf Rausch’s custom-designed console featuring KP-32 keypanels from RTS
Opened in 1900 and seating 1,200, the Deutsches Schauspielhaus in Hamburg is not only the largest but also one of the finest theatres in Germany. Currently the theatre is undergoing reconstruction and renovation for only the second time since 1981-1984. Now, however, there is to be no interruption of the schedule, as performances will continue on the so-called “Playing field” – a stage in the centre of the auditorium – until work is completed in the autumn.

In the course of the renovation, it was necessary to move the stage manager’s console to a temporary location in one of the boxes. The planning and implementation of this task was entrusted to the Hamburg- and Berlin-based Amptown System Company (ASC). "The stage manager's console is the most important tool at his disposal,” says Stefan Thomsen, ASC’s communications specialist. "It allows him to coordinate the precise interaction of everyone involved in the production not only during rehearsals but also during performances.” It was imperative, therefore, that the full functionality of the console be maintained despite the move. Otherwise, in the view of Chief Stage Manager Olaf Rausch, it would have been impossible for performances to continue as planned. “The days when stage managers could communicate like conductors by means of gestures are long gone,” explains Rausch. “In fact, we are becoming increasingly reliant upon modern technology.” Interference-free, high-quality lines of communication between the stage manager and the cast and crew are therefore essential to the smooth-running of a modern theatre. 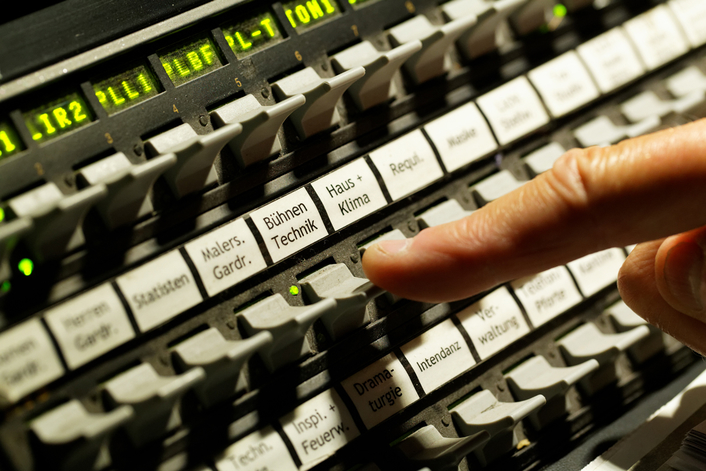 Amptown System Company was entrusted with the technical implementation

At the heart of the installation is a 32 x 32 RTS Cronus matrix, two rack units in height and capable of accommodating up to four cards supporting eight ports each. This is linked to nine KP-12 keypanels and four EKP-20 expansion panels. These, located variously in the lighting box, sound control room, mobile workstations and stage manager’s console, assure reliable communication between all the various disciplines and trades involved in the production. In the stage manager’s box, an RTS PH-88 lightweight headset is also in evidence. “I find that better than having a microphone installed at the console,” says Rausch. “For one thing, you can sit more comfortably, but it also ensures stage directions are better understood.” WKP-4 keypanels also secure communications with the door and fire station. The technical direction, rehearsal stages and management office are also integrated into the system using WKP-4 panels. To facilitate servicing and corrective maintenance, there is also a KP-32 keypanel in the central equipment room. The call system is implemented by four RTS UIO-256 interfaces.

Olaf Rausch is thoroughly convinced by the system: “A custom-designed stage manager’s console is a fine thing,” he says. “This one lets me communicate quickly and directly with all persons involved in the production. The RTS intercom system keeps me in constant contact with the lighting and sound engineers, but in addition I can communicate by radio with the stage technicians whenever necessary and summon the actors to the stage, as well as giving them their cues and indicating their marks, by means of light signals.”

The stage is set, in other words, for the Deutsches Schauspielhaus to remain for the foreseeable future one of the finest theatres in the land.

RTS is an industryleader in the design and manufacture of intercom solutions. From the Advanced Digital Audio Matrix systems used to coordinate major network broadcasts of the world’slargest events to small-format systems used for in-house productions, RTS isdedicated to innovating the future of global communications.