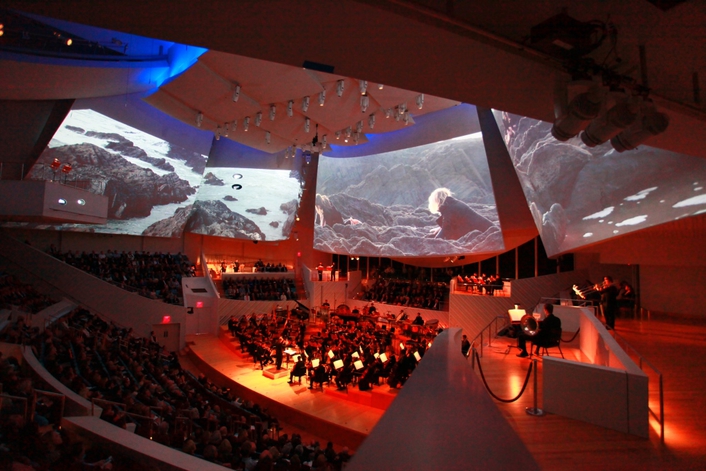 grandMA2 joins the New World Symphony as New World Center opens in Miami Beach
It may not be your grandmother’s symphony orchestra but, nevertheless, grandMA2 was out in force when the New World Symphony opened its new Frank Gehry-designed home in Miami Beach. The New World Center is the first American concert space built from the ground up to integrate sophisticated video, theatrical lighting and flexible stage space, and a grandMA2 full-size and a grandMA2 ultra-light play a key role in lighting control on the campus.

The New World Symphony is an elite training orchestra for musicians who go on to work at major symphony orchestras; it’s known as one of the most innovative organisations in the country, and the new concert hall is a testament to its state-of-the-art outlook.

“I chose the grandMA2 because of the amount of control we need,” says lighting designer Stefan DeWilde, a veteran of the famed Cirque du Soleil. “We have 300 conventional fixtures and hundreds of LEDs in the atrium which run off the console. Then there are 1,600 LEDs in the parking structure and 150 conventional fixtures and 75 moving light in the hall. We’re pretty loaded up, and nothing else but grandMA2 made sense to use.”

He notes that having a front-end unit to manage all the lighting efficiently was crucial. “Reliability was key, and the sheer amount of information in our show files is substantial. We’re running multiple networks, ETCNet2, Art-Net, MA-Net2, plus nine Pandora’s Box HD media servers.”

DeWilde reports that, “we already have 32 universes for television, theatrical and architectural lighting and run a full calendar of shows.”

Among the lights controlled by the grandMA2 are 1,200 conventional ETC and Altman fixtures; 1,600 LEDs from CK, EW, Graze, CB and iCove; 2,000 architectural fixtures; an array of Vari*Lite moving heads; and 26 washes and spots for the atrium. When required, the grandMA2 also controls video, hazers, scent generators and four RGB laser projectors.

“Now that I’m using the grandMA2, I can’t imagine working with anything else,” DeWilde declares. “Having the grandMA2’s user interface and bigger screens with extremely high-quality graphics helps the efficiency of programming: You can lay out everything, and really see it. I can select our fixture layout much more efficiently.”

He adds that the system’s “processing power is phenomenal and its speed fantastic. Using the grandMA2 means a significant improvement in speed and efficiency when we’re managing a huge lighting rig. The software updates are amazing, too.”