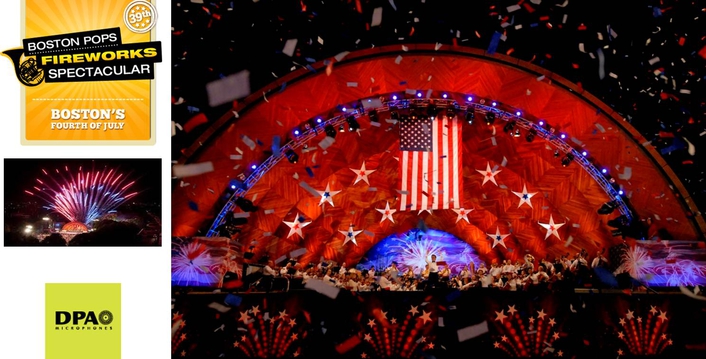 Boston Pops Calls on DPA Annually for the Nationally Broadcast Live Event
The Boston Symphony Orchestra has once again tapped DPA Microphones for its nationally broadcast, live Boston Pops Fourth of July Fireworks Spectacular. Held annually in the Hatch Shell at the Esplanade along the Charles River, the concert and fireworks show hosts nearly 400,000 attendees. As the most watched Independence Day performance in the U.S. each year, the Pops have continued to rely on DPA Microphones to ensure that audio at the Spectacular is as magnificent as the rockets’ red glare.

With limited rehearsal time and over one hundred production inputs, the Pops needed gear that sounded good from the start and worked dependably. DPA Microphones fit the bill for miking the orchestra, and the audio crew made good use of several of the company’s equipment options during the event. DPA could be found across the stage throughout the evening’s performance, with the d:vote™ 4099 instrument microphones in the strings section, 4023 compact cardioid microphones on the piano and in the woodwinds section, and 4066 omni headset microphones worn by the vocalists and narrators.

While there were many DPA microphones on stage, revelers and home viewers would have had to look closely to see them during the show. “One thing we like about the DPA line is that they have lots of low-profile miniature capsules and microphones that are ideal for television projects,” says Steve Colby, Boston Pops sound designer and music mixer for the TV broadcast of the Spectacular. “DPA makes it easy to use a lot of microphones but not have the gear in the way of the camera shots, which makes the directors happy.”

The discreet nature of the DPA microphones used during the performance wasn’t the only thing that drew Colby to the brand. Since the Fourth of July concert is held at an outdoor venue, Colby and the Pops needed microphones that could withstand the extreme weather changes of a summer day in Boston.

“We were looking for exceptionally high-quality, great-sounding microphones that were robust and dependable in semi-hostile outdoor conditions, such as heavy rain and high temperatures,” continues Colby. “We’ve had great luck with the DPA line. There are a lot of other high-end microphones that we’ve used throughout the years, but sometimes those were tough to use in the high-humidity conditions that often roll in over the city. DPA has been very dependable in these situations.” 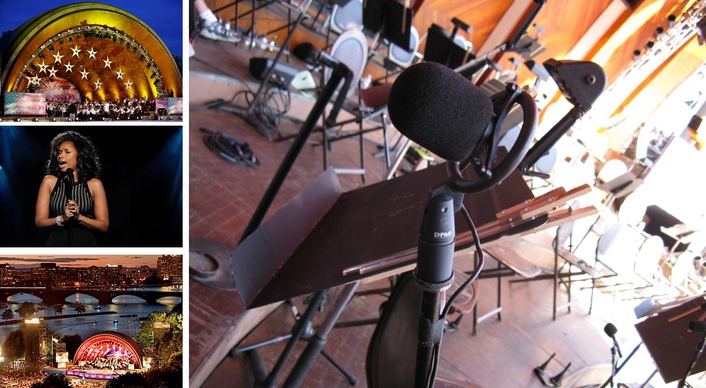 In addition to using DPA Microphones for the Fourth of July Concert each year, the Boston Pops Orchestra also relies on DPA’s 4023 and d:vote 4099 microphones for most of its theatrical performances, whether it’s a simple presentation or a full Broadway-style show.

“Another thing we like about the DPA microphones, and the 4099s in particular, is that, unlike a lot of other clip-on microphones, they sound really good,” declares Colby. “Usually, there’s a tradeoff between having a microphone attached to an instrument and having a great sound. But, whatever DPA has done, they’ve created a microphone with audio quality that is very good and true to the sound of each instrument, even when placed very close”

The first Boston Pops Fourth of July Fireworks Spectacular took place in 1974, at the suggestion of Boston-area philanthropist David Mugar to Pops Conductor Arthur Fiedler. The idea was in place to revive the then-diminishing Esplanade Concert Series by playing Tchaikovsky’s “1812 Overture,” with a few added extras. The next Fourth of July, howitzer cannons, fireworks and church bells were all added to the concert and, for the first time ever, a July Fourth fireworks display took place over the Charles River.

Now, 39 years later, the Boston Pops Fireworks Spectacular is known as the premier Independence Day celebration in the nation. Each year, since its inception, hundreds of thousands of people come from all over the country to the banks of the Charles River to celebrate America’s birthday, while another seven million tune in nationally on the CBS television network to view the event during a live one-hour primetime special.