DPA Microphones at the Pasadena POPS 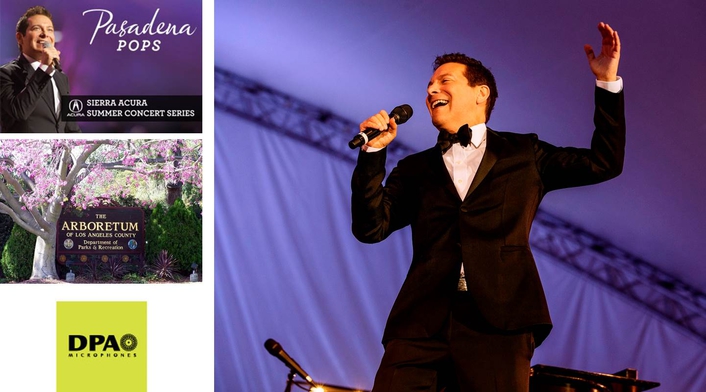 Michael Feinstein and the Pasadena POPS Take to the Stage With DPA Microphones for Summer Concert Series
Michael Feinstein and the Pasadena POPS recently concluded their 2014 Sierra Acura Summer Concert Series at the LA County Arboretum to an audience of nearly 5,000 people. DPA microphones was among the star-studded lineup, not only for this concert series but for Feinstein’s additional performances, with its d:facto™ Vocal Microphone and d:vote™ 4099 Instrument Microphones for Piano.

Michael Feinstein’s long-time Production Manager and FOH Engineer Andy Brattain was introduced to DPA Microphones a few years ago at a show at the Palladium in London. Brattain secured the mics for Feinstein’s Jazz at Lincoln Center Series and has been using the microphones ever since. 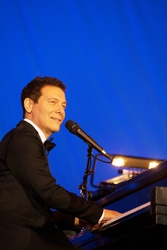 “We were heading out on the road and had a lot of different types of shows scheduled throughout this past summer, which included everything from the outdoor symphony shows to a small trio show in a club setting,” says Brattain. “I made sure that I had a couple of DPA mics with me and this is when we really started liking them, as they worked perfectly in so many different applications with all different types of sound systems.”

As a baritone, DPA’s d:facto Vocal Microphone matches well with Feinstein’s  voice. “He can get a little hot on the low end, but the d:facto is able to smooth some of that out without any coloration,” adds Brattain. “Also, the proximity of where Michael holds the mic in relation to his mouth, whether really close or really far away, works nicely with the d:facto. He has the freedom to move around and the d:facto evens out the sound, leaving me with minimal EQing.” 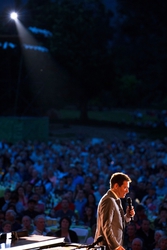 In addition to the d:facto, Brattain relies on DPA’s d:vote 4099 Instrument Microphones for Piano. “We play with the piano lid closed for 99 percent of our performances and with most microphones you are fighting the low end that produces a harsh sound. With the d:votes you can position the mics exactly how you want and when you close the lid you have this great open and natural sound,” continues Brattain. “I’ve had an engineer tell me it’s the best sounding close-lid piano they’ve heard. It’s such an easy installation too, some pianists don’t want me to tape mics to their piano, but with the d:vote magnet mounts I don’t have to worry about scratches or a gluey mess, it leaves everyone happy.”

Not only is Brattain happy with the quality of DPA’s microphones but the system tech and other FOH engineers that were at the Pasadena POP performances commented on how well they sounded. “Everyone was pretty blown away about not having to do a lot of EQing, just take the high pass up a little bit and call it a day, it was great,” concludes Brattain.

Feinstein is a multi-platinum-selling, two-time Emmy and five-time Grammy® Award-nominated entertainer dubbed “The Ambassador of the Great American Songbook.”