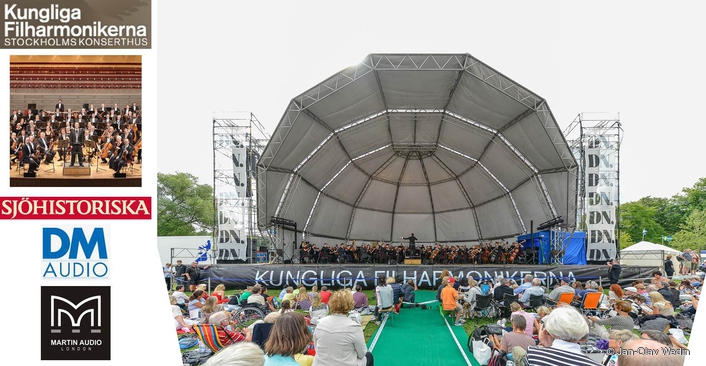 .
DM Audio’s Lars Wern has the distinction of having mixed sound for the Royal Stockholm Philharmonic (RSPO’s) legendary summer outdoor concerts for the past 25-plus years.

He therefore has intimate knowledge of the field outside the Maritime Museum in Gärdet, where the concert takes place, and has provided a constant evolutionary stream of PA systems over the decades to try and tame reflections off the large monument that overlooks the performance area, and attempt to eliminate slapback and sound bleeding back into the orchestra.

Last year, for the first time he turned to Martin Audio’s award-winning Multi-cellular Loudspeaker Array technology in the form of his newly purchased MLA Compact. The difference this supremely controllable cellular system made to the sound was unimaginable, and this year — in front of an audience of 37,000 — he experienced results even superior to 2012. “It was just fantastic,” he enthused.

Part of the reason was because he was able to call on the optimisations programmed last year, and the other part was due to the stage orientation, which had been tilted by 10° in an attempt to mitigate direct reflections.

“The giant monument has a parabolic curve and there was a lot of discussion about how the stage position should be changed,” noted Lars. “But the results we achieved from MLA were better than ever. As the stage right speaker was in the same orientation as last year we were able to keep the same ‘hard avoid’ set up.

“The MLA speakers are remarkable and it was a lot of fun to mix when so many people were making their way to the front of house position just to compliment us and say how good the sound was.”

As usual Lars himself took care of the FOH mix, supported by Mårten Ihre, responsible for pre-mixing the strings, and Drew Black who supervised the stage sound.

The comfort of being able to turn up to his favourite DiGiCo desk, fire up the MLA Compact, and without so much as a sound check “just turn on and go” was palpable.

The highlight was the Sunday prom, with an extensive classical programme ending with the Abba hit The Winner Takes It All. The performance also featured El Sistema, a group of 60 children sponsored by the LSPO and just starting out on the classic journey. They bestowed further value on the system, as Lars explained. 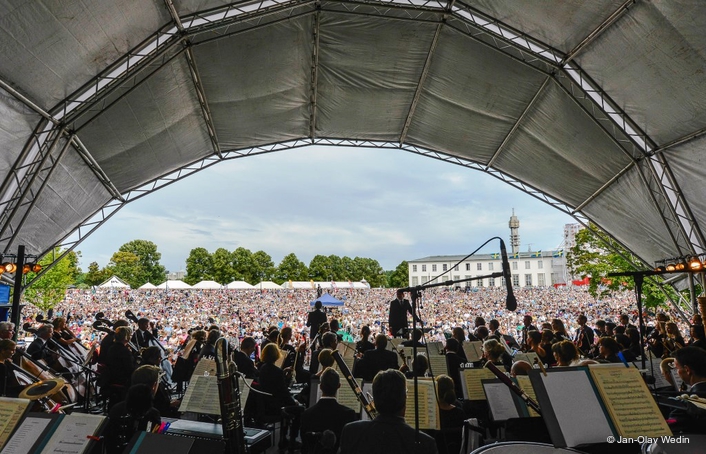 ”With El Sistema, I had ten condenser mics on the grass 5 metres in front of the PA — and I got enough volume out of the system to match the RSPO. I couldn’t have done it with any other PA than MLA.”

Anecdotally, he recalls, “The orchestra didn’t hear any bleed back whatsoever; they didn’t hear the boomy sound that can sometimes be experienced and without the cardioid sub pattern the seven double bass players said they experienced no vibration as is usually the case.

In terms of configuration DM Audio fielded one hang of 12 MLA Compact down each wing and 12 DSX subs in a Left/Right cardioid array. Six W8LM Mini Line Array (and two W8LMD Downfills) provided outfill coverage on stage right and four W8VDQ provided rear coverage, nearly 100 metres from the stage, for the audience positioned behind the tents.  He also used a pool of his favourite instrument mics including Countryman mics for the violins.

In conclusion, Lars stated, “This was so dramatically better than anything I have used for any show. I was able to get much more even SPL; secondly, there was much more headroom in the system and thirdly, in all three registers, there was less leakage back onstage.

“The musicians were also very happy. We were able to give them a bit more monitor on their vocals and because of the tent in some instances the acoustics sounded better than a concert hall. Overall, the system was fantastic.”