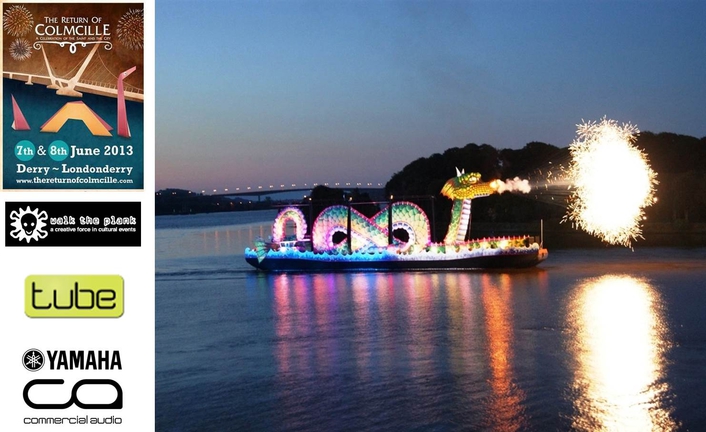 Celebrating its status as the first quadrennial UK City of Culture, the Northern Ireland city of Derry~Londonderry is staging an array of events throughout the year. By far the most spectacular was the finale Showdown on the Foyle of The Return of Colmcille on 8th June, where a mile of the River Foyle was the stage for a dramatic battle of good against evil. Despite immense technical challenges, Yamaha audio equipment ensured that thousands of the city’s citizens had the night of their lives.

Produced by outdoor arts experts Walk the Plank, The Return of Colmcille packed in an array of performances and parades in the 30 hours preceding the unforgettable Showdown on the Foyle.

The climax concluded an epic two week journey of a traditional Irish rowing boat from the Isle of Iona, symbolically enacting the Irish saint’s return back to the city he founded. Legend has it that, while in Scotland, the saint banished a ‘ferocious water beast’ to the depths of Loch Ness. Having followed Colmcille back to the city, the 8th June saw Nessie swim up the River Foyle and seek her revenge.

The showdown started with the monster - a converted sand barge jammed with production and pyrotechnic technology - over a mile downstream of the city’s Peace Bridge. From here, roaring and breathing fire, it moved up towards the bridge to be confronted by Colmcille - and, of course, defeated by the saint and the will of thousands of spectators lining the bank.

“The audio had to achieve three things, all at the same time,” says Melvyn Coote, managing director of the event’s audio production company tube UK. “Firstly, we had to ensure that an audience 750m wide and up to 15m deep was always looking in the right direction at the right time - at the monster, at Colmcille or at the choir on the Peace Bridge.

“Secondly, we had to ensure that the sound from every element of the production - which included live narration, playback of suitably dramatic music on playback and the live choir - was also correctly delayed to multiple PA stacks along the river bank, so all parts of the audience heard it clearly and in sync with what they could see.

“Thirdly, we had to ensure that the monster's sound effects, coming from a PA on the dredger itself, reached different parts of the huge audience area simultaneously and tightly synchronised with the rest of the production - while all the time it was moving up river.”

“We are experienced in delivering this kind of giant 3D soundscape with Walk the Plank projects. However, the real difficulty was the fact that the focal object - the monster - was moving significant distances. So we had to track that movement and constantly adjust the delays in the system as it moved,” he says.

The live and recorded audio was mixed on a Yamaha CL5 console and two Rio3224-D i/o units in a cabin on the riverside. Alongside them were a pair of cascaded DME64N digital mixing engines with Dante interface cards, programmed with multiple delay matrices to ensure that the sound was clear across the whole, vast area. 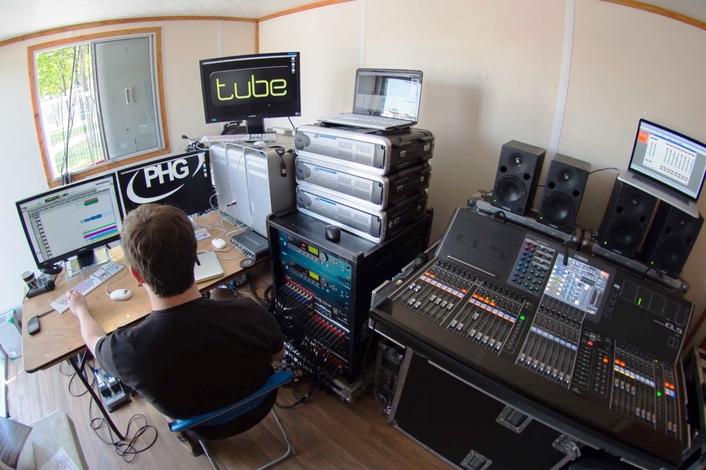 tube UK's John Redfern with the Yamaha CL5 and DME64Ns

Adding a further layer of complexity was the monster’s sound effects, which were sent wirelessly from the CL5 to the dredger. An onboard Yamaha LS9-16 console and DME24N submixed the sounds, before broadcasting them through the onboard loudspeakers. At the furthest point, this meant sending the sounds from the cabin to the dredger nearly a kilometre of delay time ‘early’, so they would be broadcast from the dredger at the right time.

As the ‘monster’ made its way up the river, the onboard crew had 16 pre-programmed GPS waypoints, corresponding with different length delays, where the DME24N was adjusted to bring it into sync with the shore audio system.

Once the dredger was at its final place, ready for the monster’s battle with Colmcille, the audio system still had to draw the audience’s attention alternately to the different elements of the production, as well as ensuring the audience further down the river continued to enjoy excellent sound.

“We needed a huge amount of continually-changing delays,” says Melvyn. “The delay matrix in the Yamaha DME is one of the only products that allows you to do it and on this show we had all three units working at their limits. But despite the complexity, once everything was programmed they made it comparatively straightforward to operate. John was triggering scenes via QLab and MIDI straight into the DMEs and it worked really well.”

Important to keep the scale of the show secret from the city population, there was no chance for rehearsal. Once pre-programmed, Melvyn and the team used clicks to fine tune the delays - although he admits they did do a test ‘firing’ of the monster’s roar. “I was told that it stopped people walking across the Peace Bridge in their tracks and there were children running indoors in fear,” he grins.

However, the show itself was the first time they could really test the system… and it worked perfectly.

“It was nerve-wracking, but within the huge scale of what we were doing it was as near as dammit perfect,” he says. “The accuracy and the robustness of the system was really important, which is why Yamaha was the ideal choice. There was no redundancy in the system and during the show we didn’t have time to worry about reliability. Having the peace of mind of knowing that it would work flawlessly was vital.”

Yamaha’s Karl Christmas was full of praise at tube UK’s work. “The sound was incredible. The fact that it was so clear right the way along the river is a real testimony to the accuracy of the delays,” he says. “There were no second chances, Melvyn and his team had to put their complete trust in the DMEs, the CL5 and LS9 in front of thousands and it all worked perfectly. 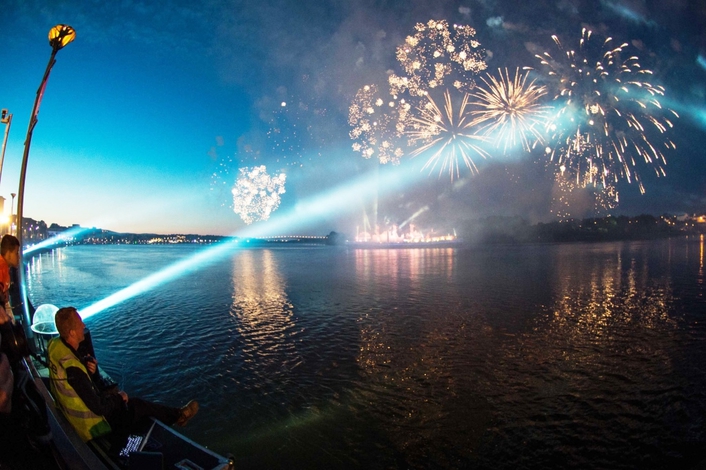 “All the people I spoke to in the audience were really impressed. The overwhelming sentiment was that the production made them really proud to be from the city.”

“As the entire project aimed to use Northern Irish resources where possible, we were proud to team up with Production House NI who provided all of the quayside PA and gave great backbone support to the technical front-end we were focussed on,” notes Melvyn.