CPL Projects for Arcadia at Glastonbury 2014 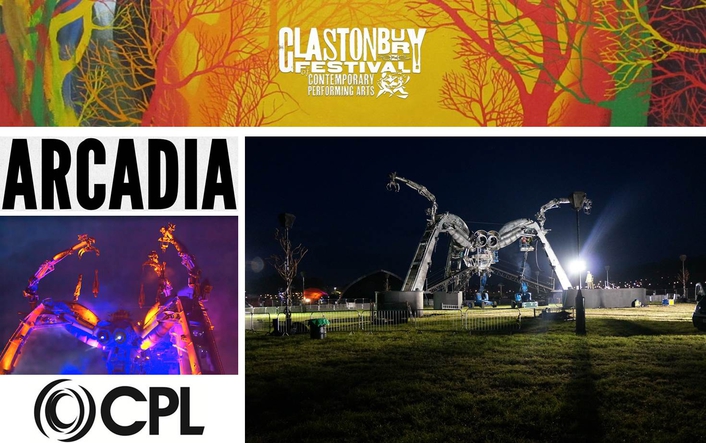 Arcadia took their magic mix of metal, mechanical engineering and madness to the 2014 Glastonbury Festival of Contemporary Performing Arts (‘Glasto’ to those who know and love it!) with the return of the giant spider – around 12 metres tall and 40 metres wide - and an even bigger and better show than previous years!

More than 50,000 party people enjoyed Arcadia’s superlative music line up each night of the event, moving and grooving beneath the amazing sculpture for three nights of craziness, complete with spectacular visuals created by Video Illusions and blinkinLAB, with amazing projection supplied by west Midlands based video production specialists, Central Presentations Ltd (CPL).

The fabulous and highly visual Arcadia concept – originated by Bertie Coles and Pip Rush - transforms scrapped military and other hardware into environments that celebrate harmony and the human spirit. It is a fantastic fusion of industrial art and innovation that’s captured the hearts and minds of festival goers from around the world.

CPL was invited back to Arcadia after their very successful collaboration at last year’s Glastonbury extravaganza, and this year their team was led by Matthew “Max” Boyse and Jimmy Smith. 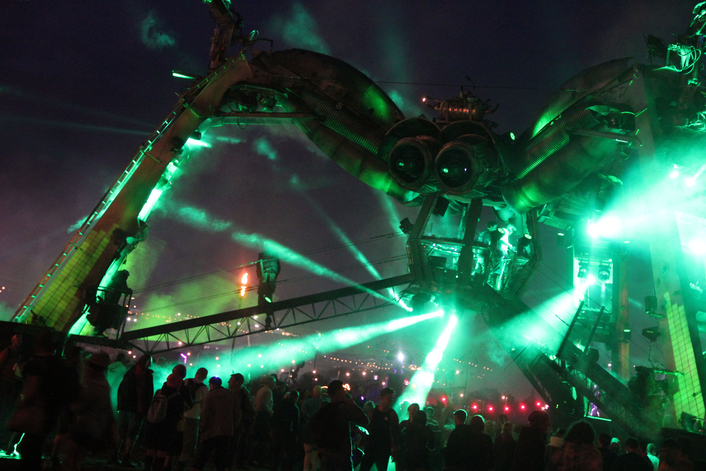 They again worked closely with Video Illusions’ Dave Whiteoak – who first came up with the whole concept of bringing the spider to life with video, a project that has energised him for the last four years – and with blinkinLAB’s Tom Wall, who created all the bespoke footage and animations for the visuals show.

Together, CPL and Video Illusions designed the dynamic HD projection system – using six of CPL’s Panasonic PT-DZ 21K projectors – one for the back and one for the front of each of the spider’s three massive legs.

This year, with the whole Arcadia space being increased to allow a greater capacity audience to catch the vibes, the custom projector towers complete with scenic surrounds were moved back another 20 metres – so the machines had to throw a distance of 40 metres.

Each image projected was 11 metres wide by about 15 metres high and these were mapped precisely onto the spider’s legs using an Avolites AI media server which stored and replayed all the video content.

In addition to the projected visuals, Video Illusions supplied their own 10 mm LED screen panels which were integrated into the structure around the DJ booth, forming the mouth and the brain of the spider, with the projections effectively becoming its skin! 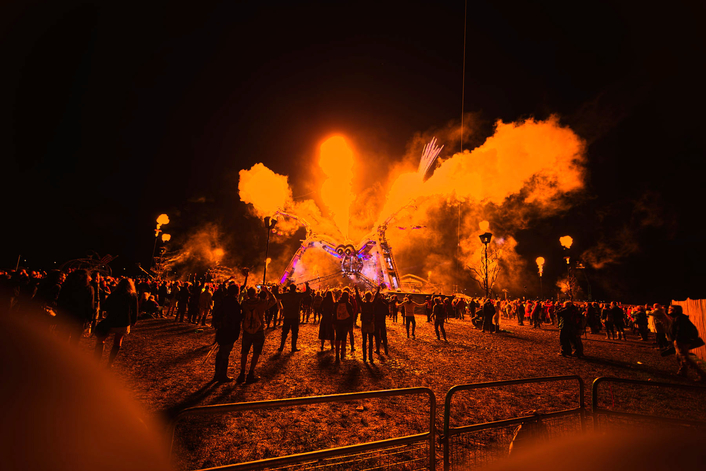 The bespoke content for the 2014 show was originated by blinkinLAB who received a 3D CAD model of the spider from Arcadia and created a simplified UV mapped 3D model for use in the Avolites AI media server.

The timecoded AV footage created for the 2014 ‘landing’ show lasted around 35 minutes. The spectacle included a hi-energy choreographed montage of aerialists, lasers, flames and cranes complete with pumping soundtrack. 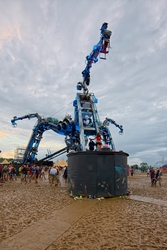 The remainder of the time the area was in action, Arcadia’s projected and LED visuals were VJ’d freestyle, for which blinkinLAB produced over 100 video loops and mapped animations – all with spectacular results that could be seen and appreciated from near and far.

Max from CPL comments, “It was incredible to be part of the Arcadia experience again this year. We really enjoyed the great synergy with Video Illusions and blinkinLAB, and we’re very happy to be part of one the most unique, talked-about and most enjoyed elements of the Festival”.

Dave Whiteoak says, “I was very keen to work with CPL after last year’s success, and once again everyone worked tirelessly with 24 hour days to produce a show-stopping production.

“Throughout the whole Arcadia project I have been lucky to grow a number of amazing relationships with some of the most talented technicians / suppliers and artists in the industry … Pip Rush and Bertie Cole are absolute legends and them introducing us to CPL has helped us massively change how we work on our crazy designs and custom projects. I believe together we now have a new A-Team”.

This included d&b Q-Series line array sound systems from CPL which were installed for the Heaven, Dome and Rocket stages; and for the Hell stage, one of their new Pandora’s Box dual media servers was supplied together with two 10K Panasonic projectors.

Also for the Hell stage, CPL supplied 24 new Core 30 battery operated LED uplighters that were used to highlight the outside of the stage. These were picked for their rugged construction, wireless data connectivity and cable-free installation, all making them ideal for outdoor applications.

CPL supplied equipment to Shangri La for Glastonbury 2013, but this year the amount of equipment was increased and the production values across this popular area increased.

Going To the Movies
The SWG Events – part of the South West Group - again asked CPL to provide projection and playback on Williams Green for special screenings of Morgan Neville’s Oscar winning documentary feature “20 Feet From Stardom” – exploring the worlds of some of the backup singers who brought style and dynamics to popular music legends.

A PlaybackPro computer and switching equipment plus a 20,000 lumen Barco HD20 projector ensured that everyone could enjoy in full HD whatever the weather, which veered from blindingly bright sunlight to cantankerous storms and grizzly greys across the weekend!

About Glastonbury
Glastonbury Festival of Contemporary Performing Arts is a five day music festival staged near Pilton, Somerset UK. In addition to contemporary music, it hosts a diversity of dance, comedy, theatre, circus, cabaret and many other arts. It is organised by Michael Eavis on his own land, Worthy Farm in Pilton. Started in 1970, it is now the largest greenfield festival in the world and among the most famous. It’s attended by around 175,000 people. This year’s main stage headliners were Arcade Fire, Metallica and Kasabian and literally thousands of other artists performed on and in hundreds of other stages and spaces around the enormous site.