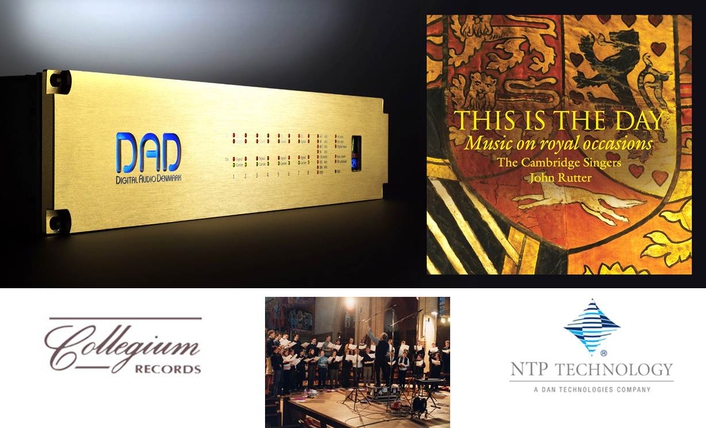 "We have been using a 16 channel DAD AX24 system for over three years," comments composer, conductor, editor and record-producer John Rutter. "The AX24 incorporates high quality microphone pre-amplification and analog-to-digital conversion in a single system. Both processes are crucial when you are trying to capture an ultra-high quality mirror of an actual performance. Our new album was recorded at St Alban's Cathedral and London's Temple Church. Eight additional AX24 channels allowed us to field up to 24 microphones instead of the 16 which the system previously accommodated.

"Choral music can generate very fierce peaks which demand very forgiving mike pre-amps. Dual soprano parts in thirds, for example, tend to generate huge energy spikes. The DAD AX24's pre-amps really do absorb them, are ultra-reliable and have very low internal noise. Choral distortion is also dependent on the analog-to-digital converter. Choirs generate all kinds of strange intermodulation artefacts and you absolutely don't want to add any more. The AX24's analog to digital converters are outstandingly transparent. Even before I used the pre-amp options, the AX24 sounded cleaner and clearer than the competition. It delivers the quality we require and is very light and portable.

"We record onto a Pyramix digital audio workstation using the AX24 system at its 44.1 kilohertz sampling rate which eliminates the need for subsequent downconversion. The AX24 gives us the capability of using sampling rates as high as 192 kilohertz which could be useful to match future audio publishing standards."

Collegium Records was established in 1984 as a label dedicated to the Cambridge Singers, with the aim of presenting a range of choral music in recordings of musical excellence and high technical quality. The Cambridge Singers are a mixed-voice chamber choir formed by their director, John Rutter, for the express purpose of making recordings. The group originally comprised former members of the chapel choir of Clare College, Cambridge, where John Rutter was Director of Music from 1975 to 1979. This nucleus was supplemented by former members of other collegiate choirs. The Cambridge Singers have recorded over 30 critically-acclaimed albums of music from across the broad spectrum of choral music. Live performances have included such venues as the Royal Albert Hall, London, and Carnegie Hall, New York.