Albania is today experiencing strong growth in various areas. This is evident from the development of tourism on the coast and in its beautiful historic castles, its enhanced communications network, which connects it today with the rest of Europe, and the many events that take place each year in its major cities.

Miss Shqiperia 2012 is one of these. It is a beauty contest unlike others, because, as director and producer Petri Bozo points out, "it is first and foremost a cultural event. It has taken place every year since 1998 in Albanian historic sites and castles." In 2012, the contest took place outdoors at a beautiful castle founded by the Romans about 2000 years earlier in the town of Kavaja, near Tirana. 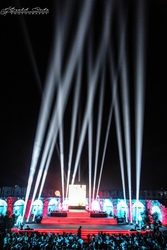 The importance of the event, which was broadcast on all the national television channels, was also clear from the first class TV crew involved. The Italian director of photography Franco Ferrari, who was part of the team, explained: "the Albanian people are very proud of their history, and want to communicate it to the world. The decision to hold the event in a different castle every year is a step in this direction. Lighting is crucial, because it not only enhances the event, but also the location that hosts it."

Franco Ferrari used Clay Paky lights for this blend of history and beauty: "we managed to achieve three aims with the lights in one fell swoop. We created the set, we illuminated the venue and we provided the lighting design for the show. I used a few Clay Paky Sharpys and exploited every option these appliances gave me. They are terrific, but I have often noticed that not all their features are exploited. My challenge was to use them as 'universal' lights to achieve the lighting goals I had set myself."

This explains the idea of a dolly four kilometres from the site to make the most of the Sharpy's super concentrated beams, which streaked through the sky above the castle. "I had a lot of smoke machines, but in an outdoor setting, even a light breeze makes them totally useless. Luckily, the Sharpy's light is so powerful and concentrated that it stood out perfectly even without smoke."

The lighting system was supplied by ASLV, Clay Paky's Albanian distributor and one of the leading rental companies in the country. They have supplied the pageant with the entire audiovisual and lighting system for the last three years and have also dealt with installing the rig. "They were the first Sharpys used in Albania,"  Florind Tenolli, ASLV's owner, said with satisfaction. Tenolli is a congenial man and one of the most well known personalities in the lighting business in Albania. "The success was amazing. I received compliments from 'insiders' and from the general public. No one had ever seen effects used like this before in such an evocative location in our corner of the world."

Tenolli went on to say "our mutual understanding with Clay Paky is excellent. In the last few months, I have also had the chance to see how the headquarters work and appreciate the company's great professionalism. They offer original reliable lights and truly high level customer service. I intend to replace my entire stock of lights shortly. I want to start by ordering some new A.Leda LED moving heads, which I consider to be top quality lights." 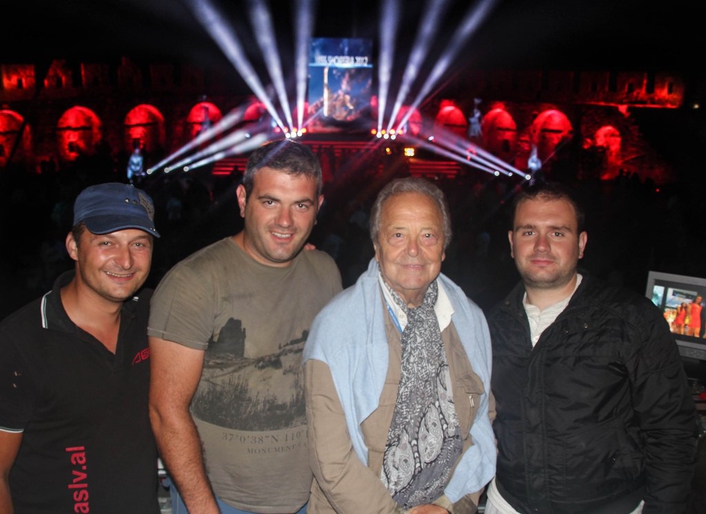 The technical Staff for Miss Shqiperia

Massimo Bolandrina, Clay Paky's Area Manager, added: "We are happy to see that Albania is experiencing an important cultural and technological renaissance. ASLV is a capable, reliable, keen Clay Paky partner. They have even made commercials for our lights for broadcasting on the main national TV networks! "

The next step was to organize Miss Globe in Vlora on 10 November 2012, again with the valuable support of ASLV. However, from the point of view of popularity, the chief attraction is definitely the Festivali i Këngës, the most important song contest and musical event in Albania.