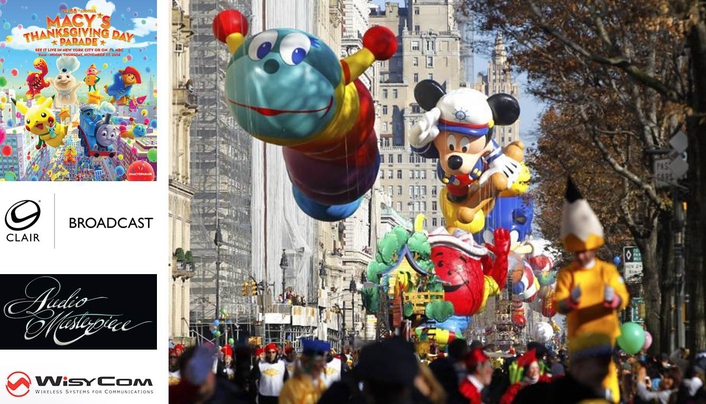 .
When Clair Broadcast, a leading global service and live show audio provider, was asked to supply the wireless audio needs for the live broadcast of the Thanksgiving Day parade held annually in New York City, it chose the MFL RF Distribution system from WISYCOM, a leading Italian manufacturer of RF solutions, for its fiber transport capabilities. The parade marks the first large-scale, live use of the MFL RF Distribution system in the United States. 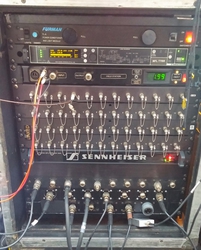 Clair Broadcast, who has been supplying the audio equipment for the parade’s live broadcast for several years, was tasked with keeping communications flowing among the parade’s organizers and during the broadcast portions of the parade, which includes host commentary and main stage performances. Since it is nearly impossible (and potentially dangerous) to run heavy, clunky cable wires over the streets and among the parade’s performers, marchers and character balloons, the team needed to find an RF solution that utilized fiber that would run underground instead. Under the recommendation of Gary Vahling, owner of Audio Masterpiece, a rental and sales company that specializes in wireless and intercom system solutions for live production and broadcast applications, the MFL RF Distribution system provided a scalable, reliable RF over fiber solution.

“The major broadcast coverage of the parade spans several city blocks and I needed complete RF coverage via fiber to support the wireless intercom, mics, in ear monitors and IFBs that we used for the televised portions,” says Josh Flower, Wireless and Communications Engineer, Clair Broadcast. “The WISYCOM MFL RF Distribution system successfully provided the RF coverage needed and helped to keep our audio flowing flawlessly. It was a huge help to have such a powerful, streamlined solution.”

Ideal for live broadcast applications, such as capturing the parade, sports (the system was also used during the 2014 Formula One car race worldwide and also this past October in Austin, Texas), corporate AV, festival concerts, and reality television. WISYCOM’s MFL RF Distribution System provides wideband optical link for up to four RF channels, combined in a single fiber thanks to its optional CWDM (MUX/DEMUX) technology. Since the system is capable of ultra wideband, whole frequency range, operating in the 150 to 790 MHz band, it is compatible with a variety of manufacturers’ wireless audio products. Case in point, Clair Broadcast utilized a Telex wireless intercom system and Shure in ear monitors and mics, for which WISYCOM’s MLF RF Distribution System is compatible.

“We are very happy to have Clair Broadcast introducing the MFL RF Distribution System during such a high-profile event as the annual Thanksgiving Day parade,” says Massimo Polo, Sales and Marketing Director, WISYCOM. “No other company offers a device such as this one. One of the biggest benefits to using our technology is that prior to its launch earlier this year, audio engineers needed to have an RF system of this scale, custom made. With WISYCOM, there is now a manufacturer that is providing a more affordable alternative—a ready-made box that is compatible with your system.”

For the system set-up, WISYCOM provided one RF box for each end of the broadcasted portion of the parade route—a MFL-TTRR and a MFL-RRTT, each holding two receives and two transmits in each box. Each box has Bandpass Filter (BPF) that is digitally tunable to 1MHz, which enables frequencies to be passed within a certain range and rejects frequencies outside that range. This feature is unique to WISYCOM – no other devices that are currently on the market are able to achieve this. In addition, another standout feature is the CWDM optional fiber module which combines both transmit and receive RF signals onto one fiberstrand. 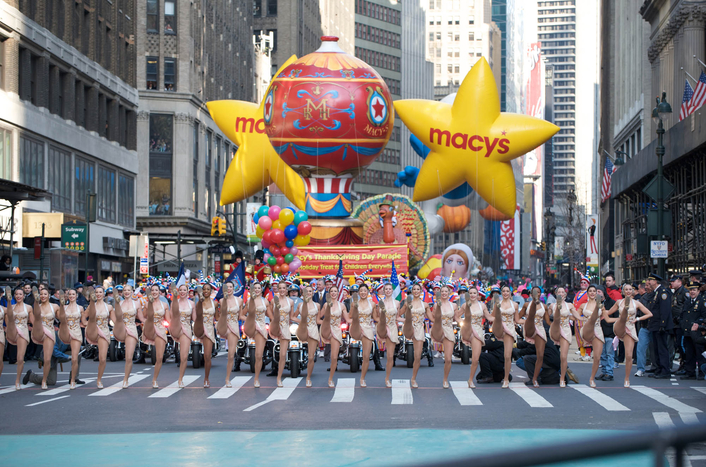 About Clair Global
Clair Broadcast, a division of Clair Global, caters to video and audio productions across the globe providing technology and services to broadcast television, concerts, sports, entertainment productions and live events. For more than 40 years, Clair Global has been a pioneer in the development of high quality, industry-standard touring audio solutions. Based in Lititz, PA, the company maintains nine offices worldwide, and a client roster that includes U2, Elton John, John Mayer and Billy Joel, among others.

About WISYCOM
Based in Romano d-Ezzelino, Italy, WISYCOM designs and builds the most sophisticated RF solutions for radio microphones, IFB and presenter cues, radio talkback and reporter systems available today in the professional broadcast marketplace. The company provides durable, flexible, reliable and practical products. The products are conceived from specific company foundations such as attention to its customer’s needs and requests, the great value of teamwork and technical competence in every single step of production and research.