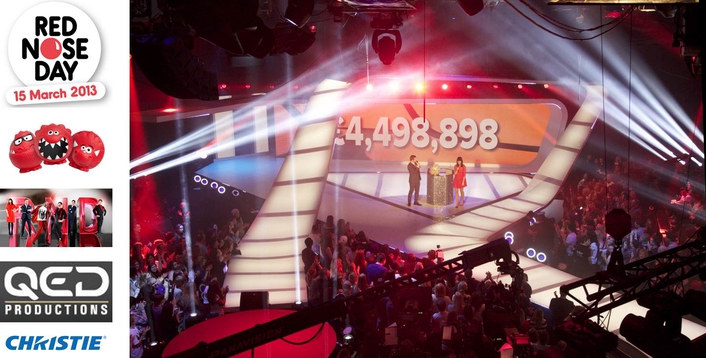 QED fielded no fewer than 19 Christie® high-end projectors to meet one of their most complex projection-mapping challenges ever for BBC’s Red Nose Day.

Dubbed ‘the biggest night in television’, the 25th edition of Comic Relief’s Red Nose Day ‘Funny For Money’ TV broadcast has so far raised a record amount of £75 million-plus for charities in the UK and Africa and was watched by millions of people across the UK.

Said QED director, Paul Wigfield, “From our previous work for BBC there were no doubts about our ability to deliver such a complex technical project, but the big guarantee that we needed to provide the BBC concerned the projector reliability - there was no way in which any of the projectors could be backed up – and so we provided all the reasons why we trusted Christie projectors to deliver.”

Aside from the short timescale, QED’s task was made even more complex by the intricate rigging, tight angles and short throw distances required. “Only the Christies could achieve this,” believes Wigfield “as all the projectors needed to perform to their optimum in every conceivable orientation.” The robustness and reliability of the projectors was not only put to the test over the six-and-a-half-hour live broadcast to the nation (on March 15) but also during the three days of rehearsals leading up to it.

Cleverly integrating video with the lighting control, Paul Wigfield added, "Not only was this the most challenging indoor projection mapping ever attempted but also the entire rig had to be installed in just one day, with line-ups only possible outside rehearsal times.”

TV production designer, Rudi Thackray's incredible twisting and curved stage set design provided the ultimate projection mapping challenge, and the solution required the projectors to be rigged on individual triangular truss sections in scarcely imaginable positions and orientations. The fourteen Roadster WU20K-J and HD20K-J projectors were flown above the stage and the five Christie WU12K-M projectors were mounted underneath the stage, with everything seamlessly joined and blended to form the continuous canvas for lighting and graphics.

Having worked out how to cover all the stage areas it quickly became clear that it was impossible to back-up any of the projectors for the live broadcast, so the reliability was crucial. The Christie J and M series projectors were chosen because of their proven performance under extremely high temperatures and their ability to operate in any physical orientation. QED had previously tested the projectors under extreme conditions for the launch of the Team GB clothing for the summer Olympics, and so their ability to withstand incredibly high temperatures had already been proven. “The projectors ran 24/7 from Monday through to the end of the show and were rock solid throughout,” confirmed Wigfield.

"With set, video and lighting all totally dependent upon the reliability of the projectors any failure would have meant that everyone would have ended up with red faces instead of red noses," he added. "Without the comfort of live back-up everything hinged on the stability of the Christies and the meticulous preparation and skills of QED's technical team.”

The projectors were specially chosen in order to maximise the resolution and maintain a consistent balance of brightness and pixel size and shape across the entire canvas. Using a combination of 0.67:1 and short throw HD zoom lenses, the WU20K-Js and HD20K-Js were flown over the stage at a variety of unusual angles, with the WU12K-Ms positioned under the stage, firing upwards and through it in order to hit the underside of the bridge. The WU12K-Ms were selected for their compact size, high brightness and incredibly quiet operation. “Being situated in such close proximity to the presenters' microphones meant that near silent operation was imperative,” Paul Wigfield observed.

QED's custom precision rigging design enabled all the projectors to be positioned amongst the huge lighting and sound rig in the roof whilst keeping within the specified trim height. QED's unique fibre-optic distribution system fed all 19 projectors with individual DVI signals and Ethernet control along with full output preview monitoring on all channels. 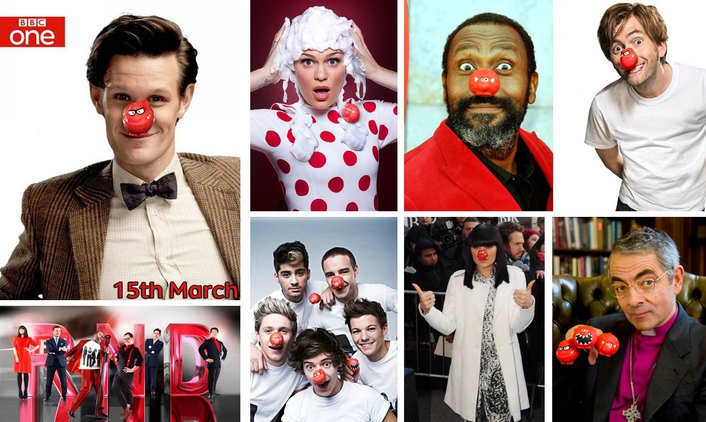 With such a complex set to map QED chose a seven d3 server rig to handle this and to integrate the other show elements onto the intricately curved stage. The 19 individual synchronised live HD outputs plus synchronised back-up machines were managed through a Lightware 32x32 DVI matrix switcher.

QED's Head of Digital Media, Richard Porter, set up the entire project, UV texture mapped the structure and provided content creators Framestore Labs with the content template.  With such a complex curved structure there were several ways in which to lay out the UV map, with the agreed selection being specially chosen to allow sufficient time for the content to be created.

The d3 servers were used to play back the content as one continual piece while the 3D simulator enabled the show to be fully visualised in the early stages and at the same time helping to verify the camera angles.

Summing up, Paul Wigfield believes the production “takes projection mapping to a new technical level and opens up further creative possibilities for television production. We're delighted that this was such a success on all fronts and we owe a lot of this to the reliability of the Christie projectors and intensive three-week system pre-rig and test.”

Jonny Dixon of Framestore Labs said, "During the early creative discussions with the BBC we knew the size and scale of the project was going to be a massive challenge, but we took it on nonetheless. We knew with the right partner we could make it happen: we consulted with several potential partners, and head and shoulders above them all were QED Productions.”

QED and Christie are delighted to have supported Comic Relief — a major charity based in the UK which strives to create a just world free from poverty.