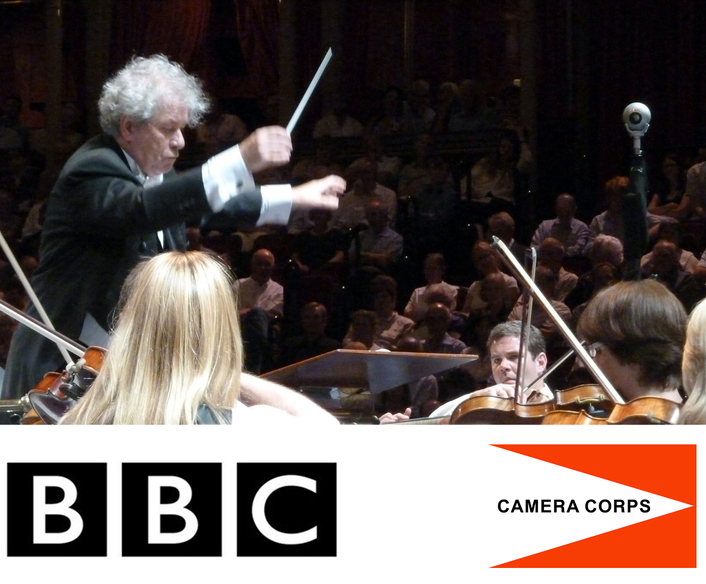 Q-Ball cameras are being used throughout the 2010 Prom Season to capture a total of 28 concerts for broadcast on BBC Two, BBC Three, BBC Four or BBC HD. The largest classic music festival in the world, the BBC Proms attract very high audiences throughout their eight weeks duration.

The July 21 performance (or 'The Q-Ball Prom' as it was termed by BBC staff working on the event) was introduced by the renowned orchestral music conductor Charles Hazlewood: "Beethoven was a great innovator and a true revolutionary, challenging established musical forms. And we have got our very own special innovation for this Beethoven Prom. We are going to take you right to the heart of the orchestra with our special remote control cameras. There are 13 in all and they are designed to give a particularly intimate account of the music."

BBC Television director Jonathan Haswell decided to capture the all-Beethoven Prom with Q-Balls at various locations around the stage: "It comprises two piano concertos and two overtures. It wasn't a big romantic symphony with extremely long phrases or the kind of thing that requires sweeping grandeur in the shots. It is classical music, usually quite short phrasing and lots of musical question-and-answer. When the piano plays a phrase and the oboe responds with the same phrase, I can cut between them quite freely in a way that's often very tricky in standard coverage."

"The idea is to bring more drama and access to the broadcasts," comments Simon Broughton who will be directing other Proms in the series. "There is no point in having interesting cameras just for their own sake; it's got to help take you inside the music or inside the characters in the orchestra. During the interval will have a filmed interview with the double bass player, and in the performance we'll pick her up with a Q-Ball shot. We'll have another camera looking down the length of the piano and it really takes you closer to the pianist. It adds a dramatic ingredient and brings viewers closer to the action."

"People love the Proms and you feel you want to do your best to capture the atmosphere of that," adds Jan Younghusband, Commissioning Editor, Music & Events. "The TV coverage needs to be better than being there, in a way. You don’t want to feel that you’re in second place because you’re watching it at home. So the television coverage should be as special as seeing it in the hall."

A full dual-mode HD/SD robotic colour camera with pan and tilt, 10:1 zoom optics and infra-red night-vision capability, the Camera Corps Q-Ball is housed in a robust 115 mm diameter sphere machined from solid aluminium. Pan and tilt can be operated at any speed from 4 seconds to 20 minutes per revolution through an unlimited number of turns. Integral high-precision low-noise motors allow the camera to be repositioned smoothly during live shooting rather than merely between shots. The Q-Ball is fully compatible with Camera Corps' range of pan/tilt and CCU controllers. It operates from 9 to 18 V DC power. The camera heads are available pre-painted to match any required colour scheme, including jungle camouflage.