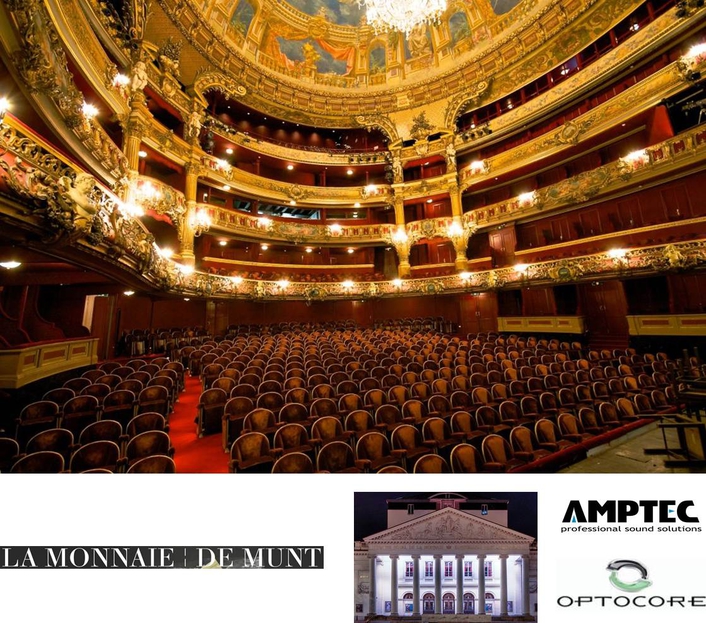 For the past seven years the famous Belgian landmark, which accommodates an audience of 1,700, and hosts plays, operas, concerts, recitals and orchestras, has enjoyed a relationship with audio specialists Amptec, and it was to the house technicians that the Optocore platform was proposed as an essential component in the renewal of their audio visual infrastructure. However, first the company had to bid successfully for the three-part contract.

As a result, ten months after Amptec arrived on site, the former master control room has been upgraded and repurposed with the installation of a multi-track recording and post production studio. At the same time, Amptec took on responsibility for the acoustic design and made-to-measure studio furniture, while the renewal of the stage call system and producers desk were also included in the project.

Jo Nicolaï, Head of the Opera House’s Theatre’s Sound and Video Department, had tasked the installers with creating increased flexibility by identifying three basic requirements: the service relating to the artistes (foldback and monitoring); creating various soundscapes and amplification, and recording and digitizing.

The Yamaha PM5D, installed in the direction room, is also fitted with Optocore YG-YS cards

Proof of concept had earlier been established when Amptec introduced Optocore into one of the Opera House’s external productions, deploying an LX4AP digital network system, connecting the Yamaha digital desks via Optocore YG2 cards and at the same time supplying a DD4ME MADI interface for recording.

In the new design, the existing analogue cabling remains and all the distributed boxes arrive at the central analogue patch, with an Optocore LX4AP normalized on the analogue patch along with 24 channels of Crookwood preamps, brought into the Optocore network through a DD32E AES-EBU interface.

The Yamaha PM5D, installed in the direction room, is also fitted with Optocore YG-YS cards while a DD4ME device provides MADI to the post production facility for multi-track recording in ProTools (this facility is located across the street, 300 metres from the central patch). There is also a separate Yamaha DM1000, equipped with YG-Y2 cards, for different mobile applications.

The new system is in daily operation as the Amptec man explains. “The PM5D handles the monitor mix, with FOH FX mixing from the signal feeds of the LX4AP and Crockwood preamplifiers (via the DD32E). Multi track recording is also part of the daily operation using the DD4ME to get the MADI signals to the Pro Tools.”

But the Optocore system enables the technicians to go a few steps further, he says. “An OB van can be easily connected via the (second) MADI port on the DD4ME. Since our Flemish national broadcasters (VRT) also use LX4AP and LX4B devices, if their radio crew needs to make some recordings their Optocore devices are incorporated in the Optoocore ring — removing the need to install their own stage boxes in the theatre.”

Summing up, David Liebens said that the Amptec network solution more than fulfilled de Muntschouwburg’s requirements. “The Optocore system opened up a lot of new possibilities which were not included in the original tender.”

And Jo Nicolaï concluded, “We are more than satisfied with our new infrastructure. The Optocore solution gives us a very flexible system: we can amplify, record, host external broadcasters and facility houses — all using the same microphones — just by plugging them into our network.

“Through the network we can undertake tasks in the three domains, using the same equipment, without one action disturbing another. We can have a show running with 30+ microphones, and we can even host external (broadcast) companies wishing to share the resources… and record the operas, and at the same time our normal activities can be carried out perfectly.”

“The Optocore solution gives us tremendous flexibility. The ability to route and patch through the Optocore devices, renders this not just possible but also very easy.”