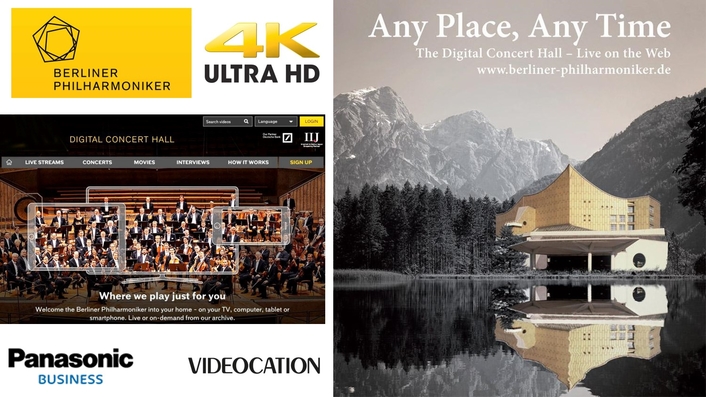 For many years, the Berlin Philharmonic is offering its Digital Concert Hall (DCH) subscribers (https://digitalconcerthall.com) around 50 concerts per year as an HD live stream and is providing additional services such as background information, interviews and a very large archive (VoD ) including concerts with Herbert von Karajan as conductor. DCH has more than 740,000 registered users, including 26,000 with a paid ticket. DCH visitors come from 100 countries, 25 percent of sales are generated in Germany, 20 percent in the US and 15 percent in Japan.

Berlin Phil Media GmbH (BPM) have signed an agreement with Panasonic Corporation to collaborate on the development of audio-visual technologies enhancing the service to 4K/HDR video and hi-resolution audio platforms. The collaboration started on 1 January 2017, and will explore opportunities to bring a premium and authentic live concert hall experience to the home and in-car environment. As a subsidiary of the Berlin Philharmonic Foundation, BPM is responsible for the orchestra’s media productions. 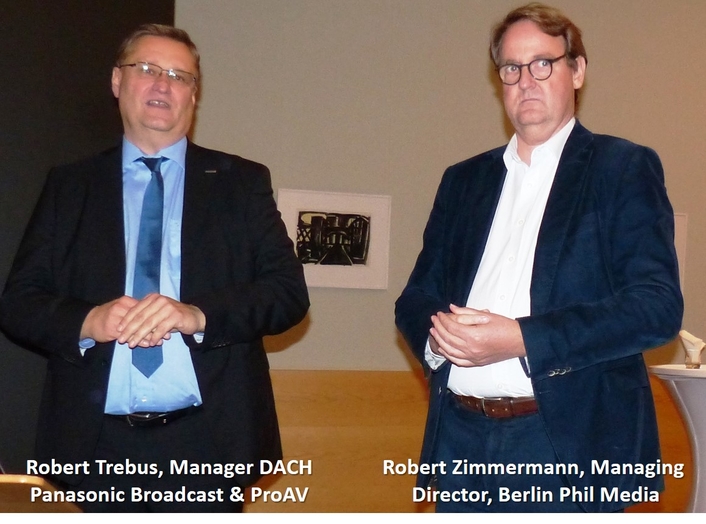 Technology and Development Partnership between Berlin Phil Media and Pansonic

As BPM’s “Technology and Development Partner”, Panasonic will provide the Berlin Philharmonic video platform DCH with state-of-the-art 4K/HDR video equipment such as broadcast cameras, mixers and monitors. The installation at the Berlin Philharmonic has started in July 2017, and the new video studio went into operation in September with the 2017/2018 concert season. The DHC will then switch from HD transmission to today’s highest quality 4K/HDR video concert transmission and with further enhanced audio after the exchange of the AV-HS6000 video mixer with the AV-HS7300 in July 2018. Of course, subscribers will be provided with an HD-SDR signal in parallel to be backwards compatible, which was one of the big challenges in this project. 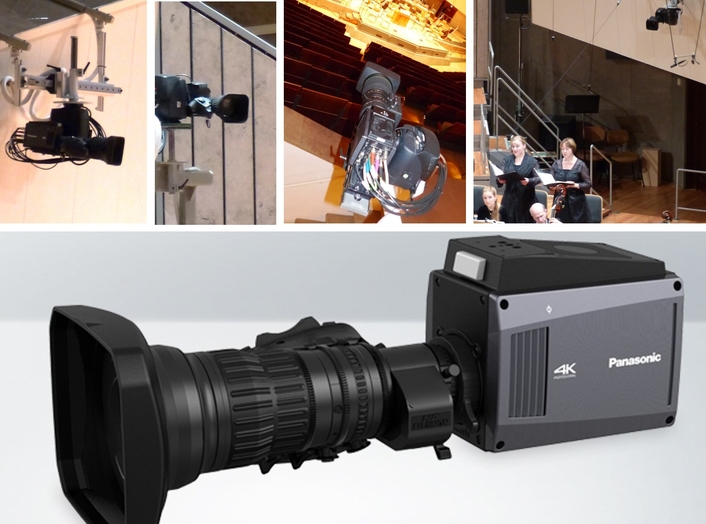 Furthermore, Panasonic and Technics, the high-end audio brand of Panasonic, will collaborate with BPM to realise an authentic concert hall experience on the latest Panasonic video and audio equipment at home and the in-car environment. The artistic intentions of the musicians will be reproduced by jointly evaluating the technological process of recording, editing and mixing, and optimised playback. 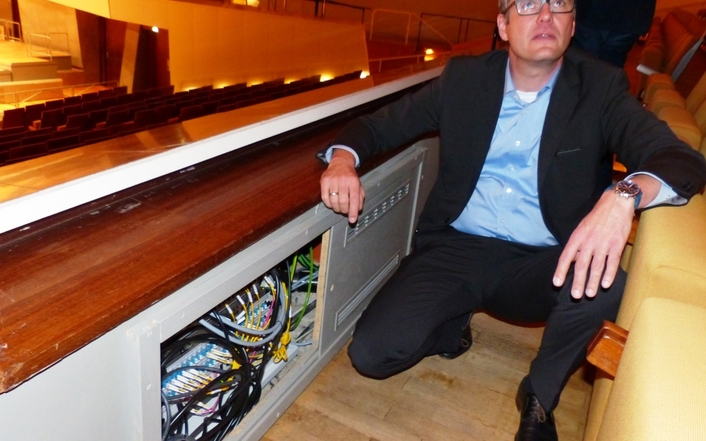 Robert Zimmermann, managing director of the BPM, emphasizes that it is a great challenge to stage and record classic concerts because ultimately it is always about not to disturb the concerts with recording equipment or even camera movements during the performances. Everything must be virtually invisible and quiet. Also, additional light sources are undesirable in the concert halls. That's why it was important to work with cameras as bright as possible - this is where Panasonic’s AK-UC3000 came into play. Since no cameramen are allowed to move in the hall during a concert, remote-controlled cameras were a must to deliver the desired footage: The solution was the Panasonic 4K box camera type AK-UB300 with Vinten Radamec control system. 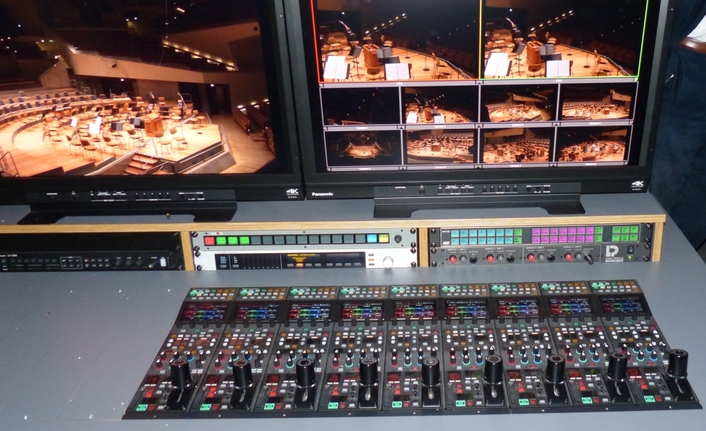 One more of the major challenges was the planning of a hybrid (UHD-HDR and HD-SDR) end-to-end production and distribution concept. In addition to the Panasonic studio cameras AK-UC3000 and AK-UB300, an AV-HS6000 mixer is used in combination with a Utah matrix switcher. Recording, editing and the replay of feeds are realized with a Cinegy server system. 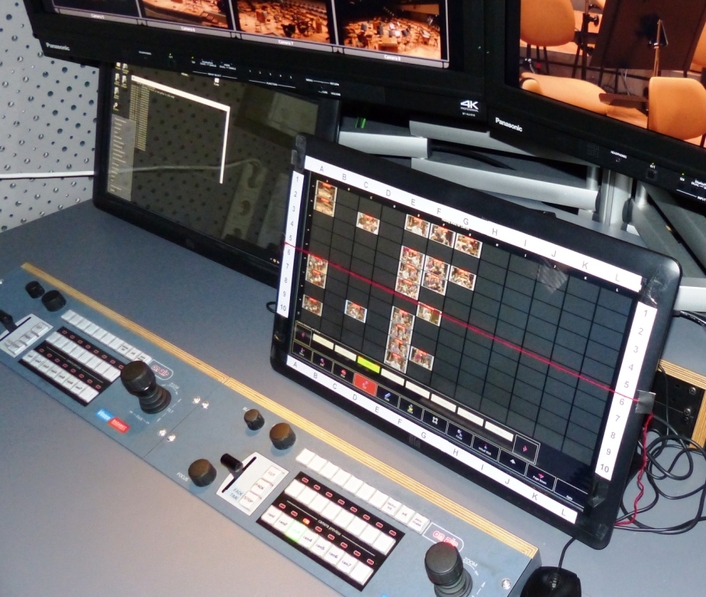 On behalf of Panasonic, VIDEOCATION was the installation partner at the Berlin Philharmonic for the UHD-HDR and HD-SDR hybrid live production environment. In August 2017, the regular operation of the DCH was started. The new Panasonic cameras (1x AK-UB300 and 8x AK-UC3000, six with 4K Fujinon 2/3” and two with Canon HD ENG lenses) as well as the Panasonic image mixer AV-HS6000 performed beyond expectations. 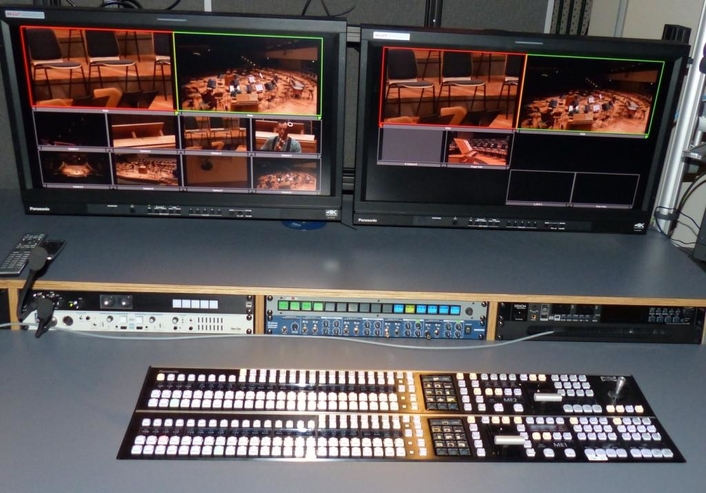 "The Berlin Philharmonic is one of the most famous and best concert halls in the world but not a typical broadcaster and yet there is the same need. Implementing the customer's ideas and taking them to the next level of a modern broadcast infrastructure combining UHD-HDR, IP-based production, new codecs (AVC Ultra) and custom software was an exciting challenge. This variety of topics and the short time available during the summer break for the implementation did not make the project easier. We are very pleased that regular operations started at the end of August, "says Markus Wallies, Head of Projects at Videocation. 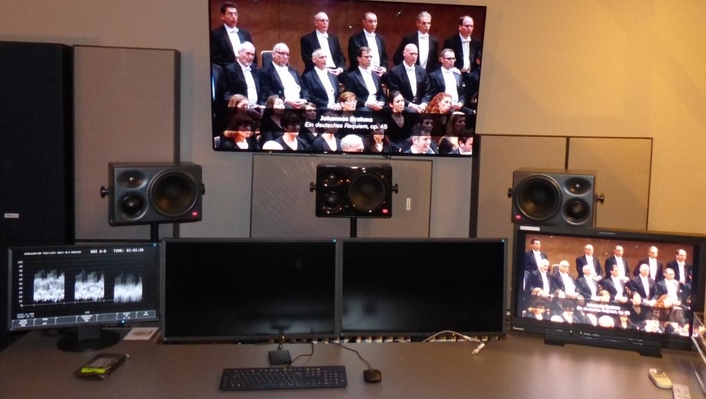 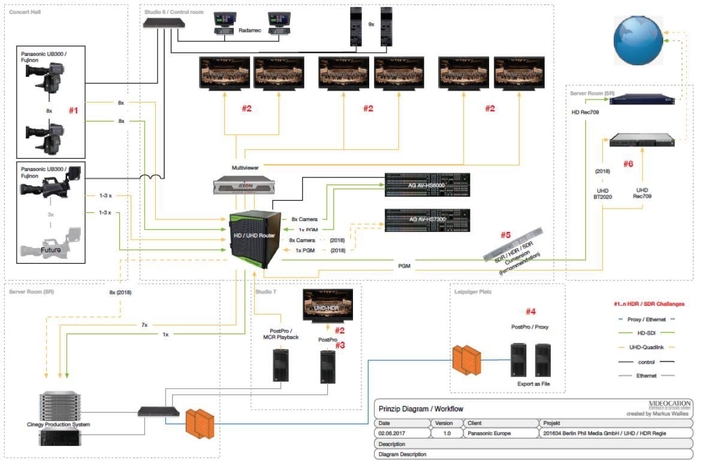 All signals are recorded onto a high-performance Cinegy server system, which is connected to multiple editing systems to generate various distribution formats, such as H.264 and Blu-ray.

To achieve the recording of the HD 1080 50p transmission signal in parallel as 4K/HDR signal the AV-HS600 vision mixer is connected frame accurately to the Utah Scientific video router. This allows to record the 4K PGM on the Cinegy video server. The video files of all the recorded cameras are available for editing via the Cinegy file management system already during the live recording without any restriction. The backup solution for the Cinegy server are AJA KiPro recorders. 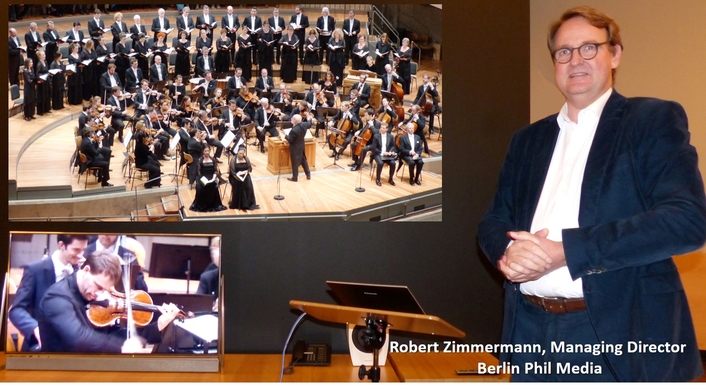 Live streaming in 4K-HDR to the DCH subscribers will be available after the 2018 summer break in July when the AV-HS6000 is replaced by the AV-HS7300.