The Neumann M 150 Tube Microphone Puts Listeners Front and Center for Key Festival Performances, Broadcast on Public Radio
Since 1949, The Aspen Music Festival and School has been one of the most famous classical music festivals in the world and one of the most prolific, hosting more than 350 performances between June and August each year. The Festival, which features four in-residence orchestras where students play alongside faculty, is recorded each year and can be heard on American Public Media (APM), Colorado Public Radio and Aspen Public Radio. To faithfully capture every nuance of the performances, The Festival relies on several Neumann M 150 microphones at its principal venue: Benedict Music Tent.

Festival performances are mostly orchestral in content and can range anywhere from small chamber ensembles (3, 4 or 5 musicians) up to over 100 musicians and a full choir on stage. Each year, the main microphone array at the Benedict Music Tent consists of a Decca tree with (5) Neumann M 150 Tube microphones placed in the center and arrayed across the stage. 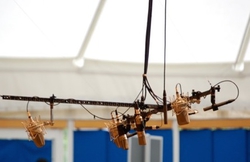 "Our Neumann M 150s Tube microphones, which were a gift from the Sidney E. Frank Foundation, have been a staple of the Festival for a long time," said Scott Burgess, Head Audio Engineer, Aspen Music Festival and School. "It is of paramount importance for us to capture every instance of what these incredibily talented students are doing onstage, and the M 150 lends a warm sound that makes the orchestra shine in all of our recordings and broadcast transmissions across the country."

Each performance in Benedict Music Tent, which has a capacity of roughly 2,000, is manned by the Festival's audio staff, which consists of 14 advanced students and professionals. Burgess says that students on the audio staff come from many of the major recording institutions around the country. This year, the Festival exceeded its attendance projections, with many sold out performances among its three primary venues. The 2014 season concluded with a rousing performance of Beethoven's Ninth Symphony, which was broadcast live to a vast listenership on public radio. 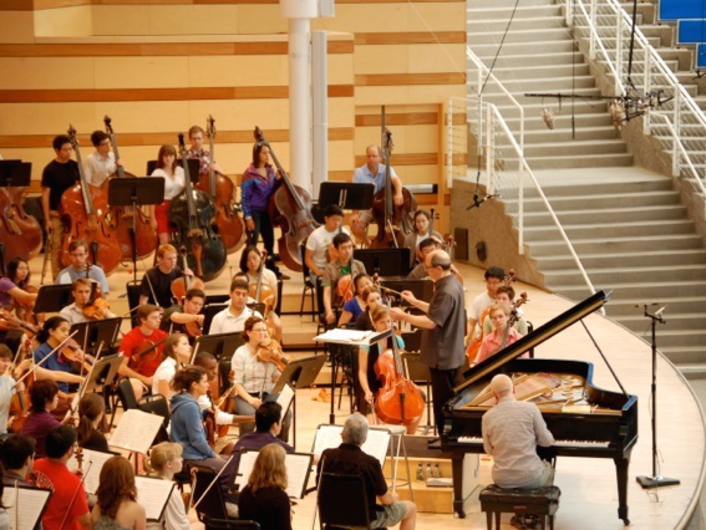 This year, the Neumann M 150s — which were chosen as the principle microphone several years ago in a 'blind' listening test versus microphones from the world's leading manufacturers — were routed to Grace Design and Millennia Media preamplifiers situated in the catwalk of the venue before being converted by an RME AD/DA interface and subsequently routed to a Studer digital console in the control room. The team relied on several Sennheiser HD 600s for headphone monitoring, including at Front of House: "The HD 600s can be useful at Front of House since they sound great and are open air," says Burgess. "They can be useful for hearing audio details while remaining aware of what is transpiring around you." 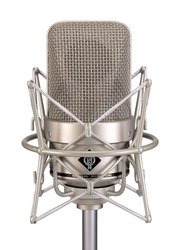 While this is only Burgess' second season, he says there is vast collective experience and wisdom to draw from, and that the Neumann M 150 plays an integral role in The Festival's sound. "The Festival has been working these rooms for a long time and, and we are quite clear on what we want and how to get it. From this perspective, the Neumann M 150 delivers in every possible aspect."

About Neumann
Georg Neumann GmbH, with its headquarters in Berlin, Germany, is well-known as one of the world’s leading manufacturers of microphones. The company, which was established in 1928, has a long track record of world-leading product designs and has been recognized with a string of international awards for its technology innovations.

From 2010, Neumann offers this expertise in electro-acoustic transducer technologies to the studio monitoring market, and will provide optimum solutions to its customers in the areas of TV and radio broadcasting, recording, and audio productions. Neumann is now the perfect partner for both the input and the output of the audio signal path. Neumann has manufacturing facilities in Germany (microphones) and Ireland (loudspeakers), and is represented in over 50 countries worldwide by Sennheiser subsidiaries, as well as by long-term trading partners. Georg Neumann GmbH is a Sennheiser Group company.

About Sennheiser
Sennheiser is a world-leading manufacturer of microphones, headphones and wireless transmission systems. Established in 1945 in Wedemark, Germany, Sennheiser is now a global brand represented in 60 countries around the world with U.S. headquarters in Old Lyme, Conn. Sennheiser's pioneering excellence in technology has rewarded the company with numerous awards and accolades including an Emmy, a Grammy, and the Scientific and Engineering Award of the Academy of Motion Picture Arts and Sciences.