.
In the role of general contractor, A&O Technology illuminated the capital of Oman, Muscat, along with many of its most notable sights in February as part of the Muscat Festival of Lights, bathing in changing colours not only the coastal road but also such landmarks as the Riyam Monument, the Mutrah Fort and the Mutrah Gate.

The Sultanate of Oman stages the Muscat Festival every year, though the Muscat Festival of Lights, which continued into March, is itself a new addition to the festivities. A&O Technology deployed for the premiere a total of 74 high-powered searchlights from its own FALCON range, accompanied by more than 300 LED fixtures and 2 lasers. 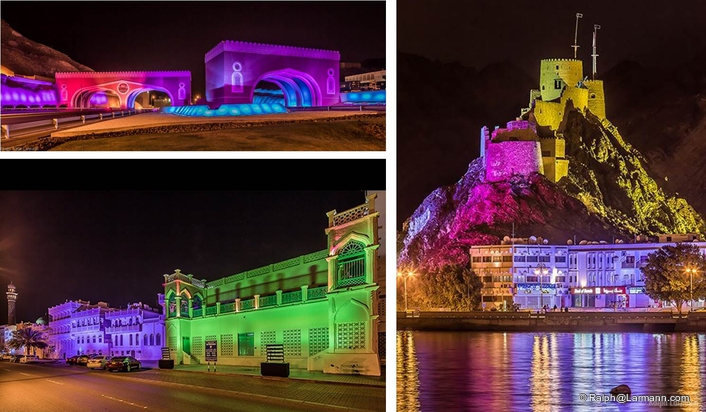 A city gleaming with ever changing colours – like a chameleon. Its reflection spills into the Gulf of Oman, involving it, too, in the enchantment… The pièce de résistance of the magical illumination was the Mutrah Fort, which is perched on a rock dominating the city. The Muscat Festival of Lights was a triumphant success and the client delighted with the decision to rely on the expertise of our full service provider, A&O Technology. A&O Technology conjured new life from many of the city’s most venerable landmarks using a mesmerizing play of colours. The Mutrah Gate, with its illuminated brilliance, pointed the way to the port of Mutrah, one of the oldest in all Oman. The 1.7 kilometre-long corniche, with its merchants’ houses and the buildings of the Old Souk, became a vivid kaleidoscope – with a new constellation of colours revealed each instant. The dramatic backdrop was formed by the spectral forms of the Hadschar mountains, the foothills of which extend to the sea shore. And in the eastern extremes of the city, the Riyam Monument appeared, a huge incense burner, radiant, mystical, ringed by restless lasers. Whoever chanced into the coastal city of an evening during the festival found themselves in a magical setting they will not quickly forget.

The highlight of the Muscat Festival of Lights was the Twister in the Bawshar sand dunes, a little further to the west. Visible throughout the valley and far beyond, it announced to all who would listen that it was festival time once more. It was the first time such a pillar of light had ever been erected anywhere in the Middle East, and its choreography, emulating the traditional patterns of Mashrabiya, inspired massive enthusiasm: a sunshade made out of sunlight in the nocturnal darkness. The Twister was implemented using FALCON BEAM colour 7000W and FALCON 6000 CMY xenon searchlights. The lighting design for the Muscat Festival of Lights was the work of A&O Creative under the direction of Jerry P. Appelt.

Muscat was transfigured – and all could revel in her apotheosis.
A&O Technology completed the planning and programming for the festival, and the colourful illumination of the various locations, in close collaboration with the client. In all, some 300 luminaires were deployed, including brilliant high-powered searchlights and a variety of LED floods that presented each of the numerous locations in ever changing colours, showing each one constantly in a new light.