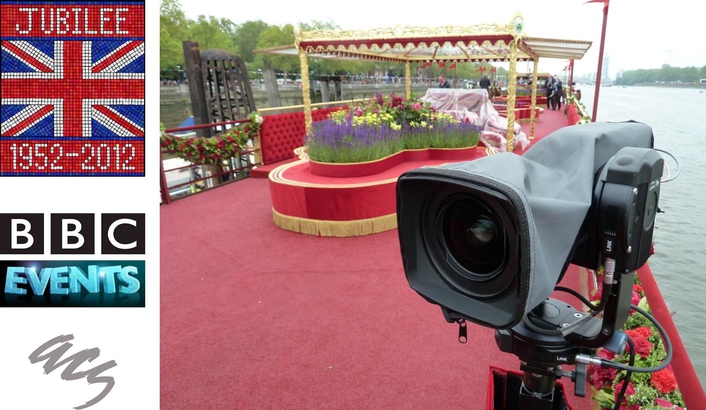 Eight ACS SMARThead™ remote pan and tilt heads were installed on board the Royal Barge
As part of this year’s summer of events and sports coverage ACS kicked off celebrations with one of its most ambitious deliveries to date. Following on from the successful coverage of commemorative services and events including last year’s Royal Wedding, ACS was chosen by BBC Events to help provide specialist camera facilities for the Jubilee with planning beginning late last year. Included within this delivery, ACS supplied and operated eight SMARThead™ remote head camera systems on board the Royal Barge at the Jubilee River Pageant.

The BBC Events production team conceived the idea at an early stage of providing extensive coverage on board the Royal Barge using solely remote cameras in preference to manned and PSC style cameras. As a result, eight ACS SMARThead™ remote pan and tilt heads were installed equipped with Ikegami HDL51 ‘brick style’ 2/3 HD broadcast quality cameras. Six were fitted with Canon HJ14 lenses and the remaining two with Canon HJ22s. The cameras offered shots of Her Majesty the Queen and the Royal Party on board as well as giving their POV of this unique flotilla.

Each camera was cabled via a single standard SMPTE 311 using an ACS integrated fibre system employing Telecast components. An area on board the vessel, normally used as a crew mess was converted by ACS into a production/engineering space and the eight SMARTheads™ were controlled by two camera operators on board.

In addition to this the Vision Engineer had control of the cameras via eight Ikegami OCP-200 remote control panels. A touchdown router, tally system, 17” Sony OLED (for racking) and multi-function video scope were also included to complete a fully featured vision engineering solution. A Panasonic AV-HS450 16 channel HD mixer supplied by the BBC was used to cut the cameras operated by the Director. The mixer was then fed to a microwave link with a links engineer on board, making a total crew of five on the day.

The principal challenge for the Royal Barge installation was space and keeping the camera related hardware as discrete as possible. Essentially the result was an eight camera OB with most of the features found in a truck or a fly-away environment with ACS designing and making detailed work surfaces and units to permit all the kit to sit where is needed to. As well as the work space, ACS designed bespoke stands for the cameras which allowed for variable lens height, had a small footprint and were clean and minimal compared to standard camera tripods.

Along with this provision on the Royal Barge ACS also supplied a further SMARThead™ with P1 camera channel rigged to Tower Bridge, offering a unique shot of the flotilla passing through. Travelling within the Pageant was an HD Gyron 935 Plus stabilised mount rigged and operated from one of the one thousand boats that took part, again offering a unique perspective of the flotilla as it made its way down the Thames.

Not far from this celebration other ACS crew supplied and operated three HD Cineflex V14 stabilised mounts rigged to hoists for coverage of the Concert at the Palace and the Royal Procession on the Tuesday, placed at Canada Gate, Hyde Park and The Mall. Our ACS Tracks department also operated a discrete Railcam at the back of the stage for the concert.

The Tuesday saw a further ACS team supply five ACS SMARTheads™ for the coverage of the service at St Paul’s and other crew rigging these discrete remotes at The Palace of Westminster and Whitehall making a total of over twenty different ACS specialist cameras supplied to capture this historic event.

ACS Managing Director Phillip Becket commented: “2012 is turning into a year of exceptional large scale deliveries for ACS. Everyone from our specialist camera operators to our engineering department have worked tirelessly to deliver incredible results during a very busy time for the company and I for one am extremely proud of the team and what they’ve achieved on this project.”

About Aerial Camera Systems
Established over thirty years ago, Aerial Camera System (ACS) is the worlds’ leading specialist camera company, providing innovative and expert camera solutions and aerial stabilised camera systems. ACS has a unique inventory available for rental ranging from remote heads and compact cameras, railcams and wirecams to tracking vehicles, underwater systems and tethered airships as well as over 20 helicopter camera systems. With an in-house research and development team the company continues to develop and launch new concepts and products within the field of specialist camera facilities, the latest being its new remote head; SMARThead™. ACS is part of the Euro Media Group, Europe’s largest provider of television and film facilities in Europe.