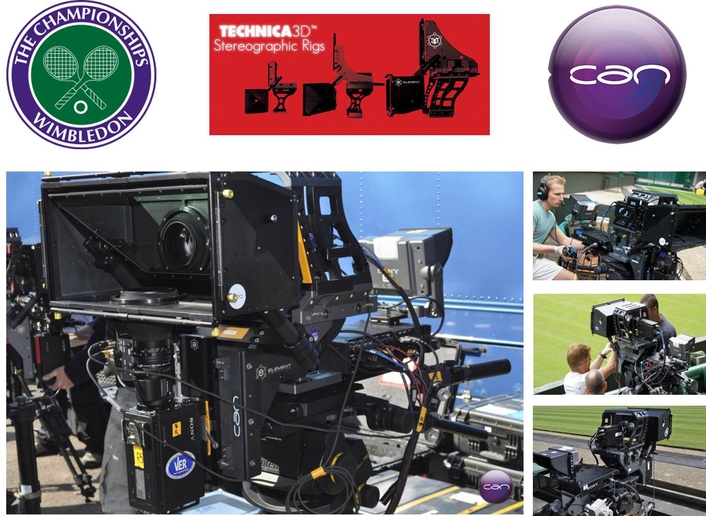 The Wimbledon 3D telecast is utilizing five ET rigs: three large camera Quasar rigs and two Pulsar rigs
Element Technica (ET), the designer and manufacturer of the 3D rigs used to stereoscopically mount and control pairs of cameras for 3D image capture, announced that its Technica 3D rigs are being used exclusively in the 3D production of the 2011 Wimbledon Championships tennis tournament. The rigs will be mounted with Sony digital cameras writes Karen Hogan for Sports Video Group.

Duncan Humphreys, head of production of Can Communicate, the firm chosen to do the 3D production of Wimbledon, worked with the ET Quasar rigs last year at several major sporting events, including the FIFA World Cup soccer championships in South Africa. “ET rigs were chosen because of their quality, reliability, and adaptability when working with the Sony MPE-200. They provide, in our opinion, the most durable and robust 3D platform available in the market.”

The Wimbledon 3D telecast is utilizing five ET rigs: three large camera Quasar rigs and two Pulsar rigs, designed with a smaller form-factor to mount mid-sized cameras. “The addition of the Pulsars to our camera chain has allowed the production to man the most sensitive camera positions on Wimbledon Centre Court with extremely low profile and unobtrusive 3D cameras.”

The rigs are configured in the “broadcast mode.” Most beam-splitter 3D rigs mount the mirrored camera above the rig, which does not allow conventional placement of the operator’s viewfinder monitor and can block spectators’ views of the event. The under/thru configuration is not as high, cutting down on the need to eliminate spectator seating. It also allows use of a full monitor and operator controls in the back, which provides a familiar look and feel to a camera operator new to 3D production.

The “broadcast mode” also provides for the pairing of a portable digital camera with a smaller but electronically identical box-style camera. The portable camera provides for operator viewfinder, intercom, tally, and other controls for the camera operator. Employing a box camera for the second camera on the rig reduces the total weight and obtrusiveness of each 3D camera position.

Cabling from camera position to production truck has also been streamlined and slimmed down for Wimbledon.

“When we started early testing for the World Cup Soccer production,” said ET co-founder Stephen Pizzo, “we re-engineered our control-electronics and protocol to support the use of fiber and bidirectional metadata. Another key development from this was our reduced power consumption. We maintained the same torque and speed while consuming less than 30 Watts. This allows the SMPTE fiber cable to power the rig and everything attached to it. The Element Technica/Sony system is the only full featured single fiber system, and it comes in three sizes and nine configurations.”

The 2011 Wimbledon Championships mark a new milestone for television production of the tennis matches. The tournament finals will be broadcast in 3D over the BBC (British Broadcasting Corporation).