Will The Future Of 3D Sports TV Ever Come Into Focus? 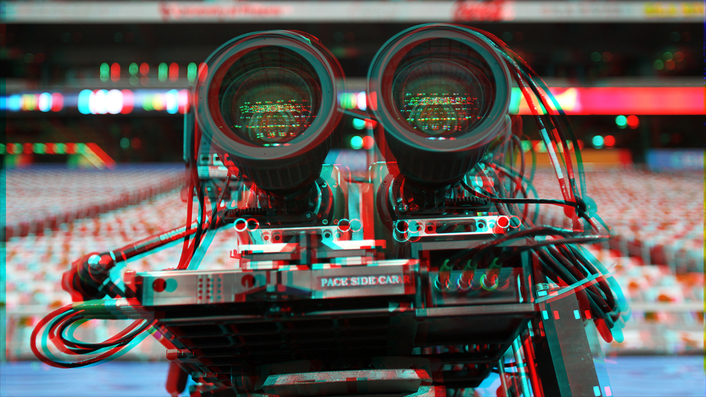 .
Mario Manningham's sideline catch in the Super Bowl was a virtuosic use of space. But the only way to watch it was in two dimensions. While 3D movies have spread everywhere, and TV manufacturers are aggressively pushing 3D TV, the NFL is sticking with two-dimensional production for its biggest game writes Jeremy Repanich for Deadspin

"We think the market is still developing in terms of viewer interest and distribution," NFL spokesman Dan Masonson told Deadspin. "We are still in the early days of 3D. We will see how quickly the technology develops and what its place is in the home."

When mass-market 3D TV rolled out in 2010, a Nielsen survey found that 64 percent of respondents said sports programming was one of the things they were most interested in seeing in 3D. Panasonic is teaming up with the International Olympic Committee so that NBC can broadcast in 3D from London this summer. LG has a partnership with the NCAA that extends through 2015.

And yet, while 3D has lazily taken over theaters, it remains the ever-receding dream of sports broadcasters. Early reviews of their 3D work have been less than stellar. Producers were still trying to find the right depth of field, so they tended to overload the viewer with detail. And in the wide-angle panoramic views that are the staple of sports coverage, the distance flattens the image.

Sports 3D has worked best in situations totally alien to the experience of watching sports on TV. During this year's Consumer Electronics Show, 700 people gathered to watch ESPN's broadcast of the BCS title game in 3D. And those attendees marveled at the progress of the technology. "I've heard the naysayers," Phil Orlins, ESPN's head of 3D production, said. "But very rarely do I hear naysayers or doubters from people who have seen a really well-done 3D production. We put the game on in that theater in Las Vegas, and the response was extraordinary."

There's an important distinction to be made, though: ESPN's broadcast was in a theater. Theater audiences are captive. At the cineplex, watching the likes of U2 3D or Avatar, we're trained not to be the asshole illuminating the room with the light from our cellphone. We resist the urge to multitask and we focus on the big screen.

At home, I bounce between screens, keeping one eye on the game and the other on my Twitter feed, the better to spew profanity at enemies and curse my fantasy team. In a report released this past fall, Nielsen found that 40 percent of smartphone and tablet owners use their devices while they watch TV. This helps explain why 57 percent of people in Nielsen's 3D survey said that the glasses were a major reason they didn't want the TV.

So TV manufacturers are exploring two ways around consumer aversion to the cumbersome glasses: Improve the glasses or get rid of them altogether. Tim Alessi, director of product development for LG, says the company is working on replacing the bulky active-shutter goggles—$150 specs with a battery pack on the side that quickly darkens each eye in turn—with passive lenses that work like polarized sunglasses. These should cost less than $20 and allow you to look at your iPhone without flicker. But they do lose some of the crispness that comes with active-shutter images.

Having to wear any sort of glasses is a deal breaker for a lot of people. Toshiba has released a glasses-free 3D TV model in Germany, and will ship a model stateside early this year. Glasses-free sets generally use a lenticular screen, with ridges like one of those kids' toys that shifts images when you tilt it. On the TV, the ridges help direct separate images to each eye; Toshiba uses a small camera to track your face to it can beam the image to you directly. Unfortunately, the camera can only track so many sets of eyes at once, and the 3D is less than Avatar-in-the-theater good.

Oh, and you could buy 10 two-dimensional HDTVs for the price of one of the no-glasses 3D sets.

Then again, the original HDTVs cost $8,000. Eventually, prices come down. "The issue that remains is quality of content," Orlins said. Forty-four percent of people polled by Nielsen said that quality was among their biggest reasons for not buying a 3D TV.

For now, the NFL is content to let others lead the adoption of 3D. The league did try a test broadcast of a Raiders-Chargers game in 2008, and for the 2014 season, it sold 3D distribution rights for Monday Night Football to ESPN. "From our perspective, it is more important to do it right than to do it first," Mansonson said.

The onus for making 3D sports work, then, falls largely on ESPN, which currently supplies 60 million households with the option of getting 3D feeds. On Jan. 28, the network aired its 200th live 3D sportscast, an afternoon of X Games coverage.

In the nascent days of 3D, a live sporting even required two separate production crews: one shooting the broadcast in normal 2D, and another shooting 3D from separate camera positions, to maximize the dimensional effect. "There was this thought out there that doing a unified or single production couldn't be attained," Orlins said. "And I never shared that thought." Early in 2011, ESPN started using what it calls 5D production: 2D and 3D cameras housed in the same unit.

Despite the reduced production costs, the new dual setup still requires a great deal of R&D, to figure out how to accommodate 2D and 3D crowds simultaneously in each sport. "Some, like boxing, require almost no differentiation whatsoever because of the proximity," Orlins said. "The really most advanced kind of single production is basketball, because the flow of the game. In basketball you can sit there for two or three minutes on the midcourt camera. But in football, if 3D isn't dramatic on the actual live play, the replay can be."

Is it worth the trouble, given that 3D TV hasn't exactly set the world on fire? Remember that more than half a decade after HD made its debut, it still wasn't clear it would get over its growing pains. Alessi said that last year, the second full year that 3D units were on the market, they accounted for 9 percent of total TVs sold. Digital TVs, of which HD is a subset, needed three years to capture 9 percent of the market: "The first few years that DTV came into the market, 3D adoption has actually been a bit faster," Alessi said.

But the quality of digital TV continues to improve, and perhaps there will be a point where the crispness of high-def outstrips the "whoa, dude" of 3D. Meanwhile, sports 3D is beset by the basic problems it faced from the start: How do you take a technology better suited to scripted action shown in theaters and adapt it not just to the games but to the way people watch them? That's not just a matter of building better gizmos; that's a matter of changing how human beings behave.