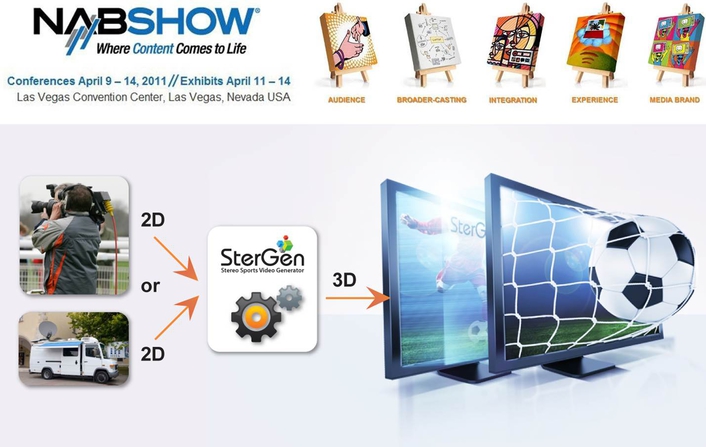 Stereo 3D digital production workflow
In the same way that sports was the “killer app” that fueled early interest in HDTV, many sports networks such as ESPN 3D and Sky 3D are betting that live sports will drive the fledgling 3DTV medium. With many sports aficionados among the early adopters of 3DTV, broadcasters are hustling to produce as much live 3DTV sports as possible, and they need stereo 3D production tools that make the job faster, easier, and more cost-effective.

To answer that need, Stergen, a strategic partner of Vizrt, will show its new and groundbreaking Stergen Live software for live 2D to stereoscopic 3D conversion at Vizrt’s booth (#SL5408) at the 2011 NAB show, to be held from April 11-14 in Las Vegas, Nev. Unlike many of its rivaling options in the market, the software does not compromise on quality, making the end-product a real treat - even for the pickiest of eyes.

“Stergen software enables broadcasters and sports production companies to produce games in stereo 3D with their existing HD broadcast equipment,” said Dr. Miky Tamir, founder of Stergen. “This spares them the huge operational costs associated with the transition to stereo 3D, especially for live stereo 3D HD acquisition. Aside from adding the Stergen 2D to stereo 3D conversion software, their existing HD production infrastructure remains practically unchanged. This presents a very compelling value proposition for those seeking to expand their stereo 3D program offerings as simply and cost-effectively as possible.”

Stergen Live, which receives an HD signal via its SDI input and outputs the conversion results from dual SDI outputs, generates a realistic 3D stereoscopic video program of the event. Stergen Highlights executes 2D to stereo 3D conversion on video that’s already been produced, making it ideal for the conversion of existing 2D media assets, such as highlights programs, and for legacy archive materials.

Designed specifically for 3DTV sports, Stergen’s software takes advantage of sports- specific features, such as the planar and uniformly colored playing field, enabling accurate segmentation of objects like players, balls, and goal posts. A known geometry is then assigned to those objects; for example, players and goal posts are vertical, the field is horizontal, and stands have a known slope. On–the-fly calculation of the scene’s geometry and its stereoscopic 3D image rendering are then performed. This stereo information can be used by various 3D graphics systems for positioning their graphics in the image depth dimenstion. The in-booth video displays will showcase the tight integration between the Stergen software and Vizrt’s own stereo 3D digital production workflow.

Stergen offers high operational flexibility: in-stadium conversion of a single camera or a number of cameras connected through a matrix switcher, in-studio conversion of a live program feed and after-the-fact converison of pre-recorded footage.

Stergen Live is currently available. Several broadcasters and sports production companies have already conducted their own successful real-time demonstrations. The first field trials are set to begin in April.