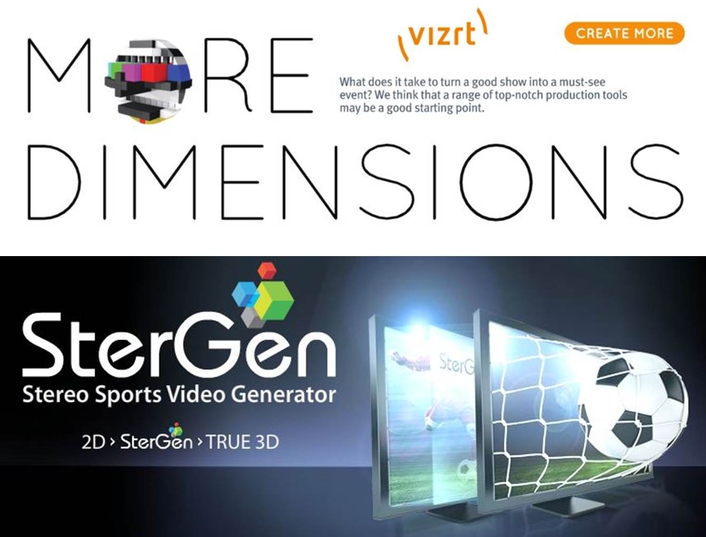 Stergen plans to introduce a live version of its Highlights software that converts 2D video to stereo 3D in real-time
Vizrt Ltd., a leading provider of content production tools for the digital media industry, today announced that it has formalized its strategic collaboration with Stergen Hi-Tech Ltd., as published at IBC 2010. Stergen is a developer of 2D to stereoscopic 3D video conversion software. Vizrt now offers tight integration between Stergen stereo 3D conversion software tailored to sports TV networks, sports leagues and webcasters and its own stereo 3D graphics portfolio.

With this new agreement, Vizrt will make an equity investment in Stergen of approximately USD 1.86 million, made up both of a cash payment and marketing services, in consideration for preferred shares. In addition, the parties have entered into a teaming agreement with respect to the sale of Stergen's products by Vizrt. Vizrt will hold approximately 20% of Stergen.

Martin Burkhalter, Vizrt CEO, stated, “We like to formalize our partnerships through taking a stake when we see technology that fits our objectives of delivering innovative products that add to our current offering and more importantly, provide an advantage to our customers in view of future market developments."

“With more than 28 million 3D capable TVs forecasted to be in homes by 2012, demand for technology that enhances broadcasters’ ability to tell their stories through this new technology is already increasing and is set to accelerate. What also makes the Stergen software so attractive is its ability to convert existing 2D footage to 3D specs, thereby allowing content owners to increase the value of their media assets, which links very well with our content management philosophy.”