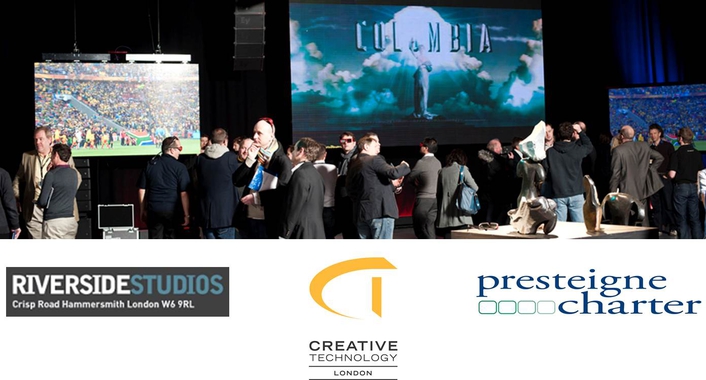 Showcasing a variety of applications and products specialising in the 3D genre together with sister company Presteigne Charter
Creative Technology (CT), a world leading supplier of Audio Visual and technical staging services, welcomed over 250 of their clients and friends to a series of Open Days entitled “Video Another Dimension”, held at the Riverside Studios in London on 26 and 27 January.

A joint production with sister company Presteigne Charter, the event provided a unique opportunity to learn more about the technology and processes involved in creating and displaying 3D content in the events market. Showcasing a variety of applications and products specialising in the 3D genre, the higher than expected attendance and the level of interest of all who came, clearly demonstrated the impact this revolutionary display medium is expected to have on the events market.

Dedicating the event to introducing and demonstrating a range of new technologies featuring that extra dimension, the video and graphic content also served to present a small selection of some of the finest projects and events that the Company has been involved in over recent months.

The entrance was dominated by CT’s new Flyer 12 and 18mm LED screen system, formed into two arches framing a high resolution ChromaLed black 6mm SMD-LED screen, displaying the best of CT’s recent events. The 2D architectural display system’s positioning allowed guests to walk around and through the set display providing the ideal forum for discussing the technical aspects of rig and de-rig.

The projection technology continued with a three dimensional mapping display utilising two 10K projectors driven by the latest Immersive Addict Control system. Whilst projection mapping onto buildings and other multi dimensional objects is becoming increasingly common, the Immersive system massively simplifies the set up process and allows simple last minute adjustment of content and projector positioning. The Immersive Addict Show Control System is given the projector positions in relation to the objects, imported as a CAD drawing or digital photo, the system then calculates how to warp / shape the video content to map to the objects.

Moving on from projection CT showcased both of the world’s leading 3D LED displays, each offering high brightness images suitable for exhibition and high ambient environments. A quantity of CT’s Barco NX4, was upgraded to display Active 3D for this event. Employing “active” image switching the Barco option retains the full contrast and resolution of the 2D version of the system, with the added advantage that 3D can be instantly switched on and off with optimum optical performance in both operating modes. The active glasses are switched via an infrared transmitter at 100 or 120hz providing a high brightness flicker free image.

Alongside the NX4 a new product jointly developed by Lighthouse and Sony demonstrated the potential of passive 3D display using LED. Employing a custom designed polarising filter applied to the front surface of each LED module the system benefits from low costs glasses and spectacular 3D images.

The final large screen display was the Panasonic 103” Active 3D plasma. With true 1920/1080 resolution and able to run video at 100 or 120hz the Panasonic display represents the ultimate in home cinema technology and is ideal for corporate meeting or small theatre environments. Like the Barco NX4, the display can instantly switch between 2D and 3D content offering superb performance in both operating modes.

Alongside the display hardware CT installed a highly sophisticated and versatile control and switching system, allowing multiple 2 and 3D sources to be integrated into a wider show control network driven by Medialon processing and controlled wirelessly via an iPad. Playback hardware included K2 and DVS hard drive systems alongside Green Hippo and Playback Pro server systems. Central switching was handled by the latest Vista X20 running in 3D mode.

One of the most interesting features of the event was the array of 3D production technology showcased by CT’s sister company Presteigne Charter. A total of four 3D camera rigs were operational including a unique and newly launched handheld rig, operating on dual RF transmitters and mounted on a steadicam system.

With 3D based on the way the human brain and eyes work, and because the pupils of a person’s eye are about 6.5cm apart, each eye views images from different angles generating a two unique images. These images are merged by the brain creating a single picture. The slight difference between the image from the right eye and the image from the left eye allows the brain to judge the depth with three dimensional vision being attained. Recreating 3D with cameras require two cameras to be positioned to imitate each of our eyes. Both sets of images are then displayed independently to each eye allowing the visual cortex of the brain to fuse these images into a perception of a three dimensional scene or composition.