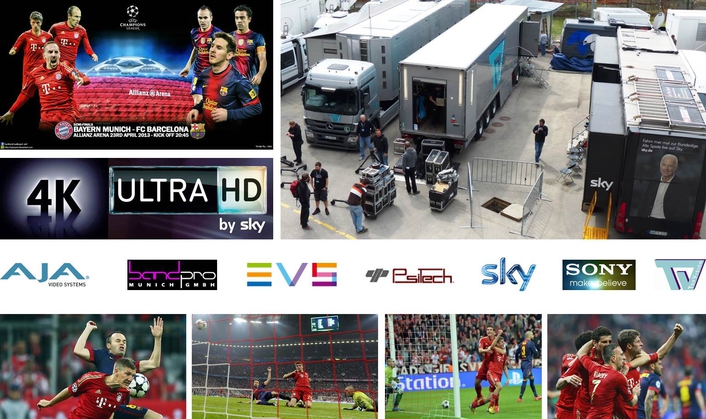 TopVision was ordered by Sky Germany to cover the match in HD - however a comprehensive 4K test took place in parallel
FC Barcelona were on the receiving end of a heavy 0-4 defeat in Munich, as the Blaugrana were outclassed by a Bayern side full of hunger, desire and discipline. Thomas Müller opened the scoring on 25 minutes with a close-range finish, and Mario Gomez doubled the hosts’ advantage with a similar finish just four minutes after the half-time break. Arjen Robben made it three with less than 20 minutes remaining before Müller rounded off a superb night for the Bavarians with his second of the evening on 82 minutes. For this year at least, Barcelona’s UEFA Champions League dreams are all but over.

And the 4 goals of Bayern Munich were covered in UltraHD by two Sony 4K cameras
For any television innovation, the main driver is always sport. If it allows you to create better, clearer, more engaging sports coverage then the innovation has a good chance of succeeding in the consumer marketplace.
Sport on television has developed dramatically over the last decade, with a clearly established language. It depends on large numbers of cameras, and importantly on multiple replays from those cameras. Sports fans expect to see key action points from different angles and at different speeds, to understand what happened and to appreciate the skills involved.

So outside broadcast trucks today routinely include large numbers of server channels to provide these replays, including slow motion playback. Audiences are going to expect the same production elements and will reject 4k if it means they have to loose these insights. Server recording and replay of multiple camera channels will stay as vital requirement also on the road to 4K.

In Munich two different 4K/UltraHD slow motion playback systems were tested, both with the possibility to zoom into the picture: a system from EVS/AJA and one from PsiTech.

The 4K/UltraHD Test in Munich:
In addition to the integration of 4K recording technology in a live broadcast, the goal in Munich was to test the signal flow and the use of 4K cameras with lenses and accessories suitable for live event coverage.

“Ultra HD is incredibly exciting for us and even more exciting for our customers,” said Alessandro Reitano, Director Sports Production at Sky Germany. “Currently 4K/UltraHD is still a thing for the future, but at this early stage, the first experiences are already amazing. The test today at the UEFA semi-final is just another of many more steps to underline Sky’s position as an innovation leader in the TV and entertainment area in Germany and Austria. We foster development in order to be the front-runners in the next TV revolution and to offer our customers the best entertainment experience possible. 4K/UltraHD delivers spectacular detail that opens the possibility for a whole new way of shooting and presentation on large screens in our customers living rooms.”

Sony F65 with PsiTech “Vortex” recorder and zoom
The 4K signal from the F65 was tied electronically to the “Vortex” system developed by PsiTech, a provider of high-speed digital video technology, and deployed to a TopVision production van. “We can move it around, zoom in where we want, and extract the particular piece that we want,” said John Kerr, president of PsiTech, “and because the resolution from the Sony F65 is eight times that of the telecast’s 1080i frame, the operator can zoom in to 1/8th of the frame during replay and still supply crisp, in-focus video. Because the F65 is designed to operate as a stand-alone camera, recording to a RAW recorder, we’ve added a CDU unit to it for this application.”

The total data payload coming out of the F65 running at 60p is 5Gbps. Kerr described the video path from the camera to the TopVision production trailer. “That 5Gbps gets crunched down onto a single fiber and sent down, all around the stadium, into the video truck. The data is translated into multiple wavelengths on the same fiber so we only have to use a single resource down from the camera site.”

The F65 camera was supplied by Band Pro Munich

PsiTech’s Vortex is the latest in a series of high data rate camera capture systems from the Fountain Valley, California based company. “And so in this case we had to configure it for the Sony F65. The F65 was fitted with a Fujinon cine style 75x-400x zoom lens with Canon zoom and focus controllers familiar to an OB camera operator. The camera together with an OConnor tripod and head, a MovCam matte box and plate, a Leader 4K monitor and some Element Technica gear to fix the monitor like a studio viewfinder to the camera was supplied by Band Pro Munich. The shading control of the cameras was carried out in the TopVision HD OBVan. 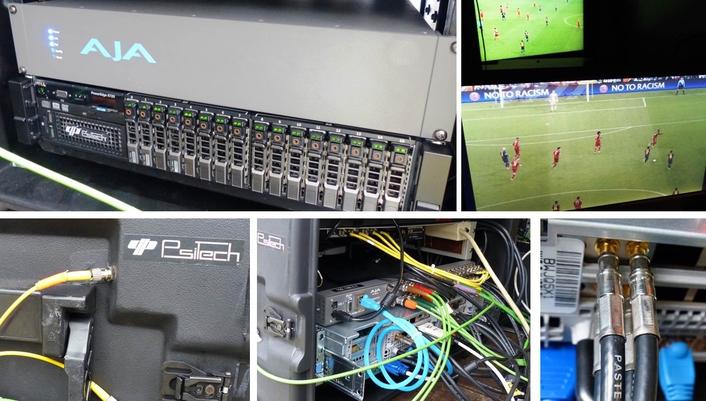 Kerr pointed out that it is critical to the system that there is no compression of the F65’s RAW video output on its way to the Vortex. “If there’s any compression, as we zoom in, we will start suffering from that compression,” he said. “We store all the data from the camera, and then we play back from all that data and do our processing on the output. By the time we do our extraction, we are giving the viewer the best possible view of that data.”

So what’s next? A new version of the F65’s software will allow to supply its 4K video at 120 progressive frames per second, which will provide smoother slow motion playback. 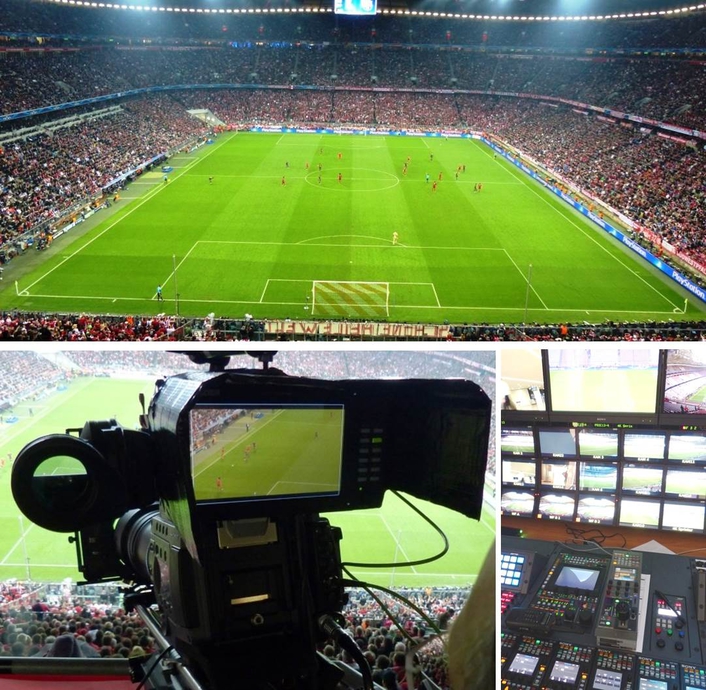 The F65 camera was positioned high behind the left goal

According to Kerr the PsiTech Vortex can handle the doubling of the data: “The system is a generic, high-data rate system. Certainly at some point we end up having to add more channels, add more storage, but we’re hoping that we’ll be able to run the higher frame rate without having to change too much the hardware.” The server in Munich had a storage capacity of 14 TB which guaranteed a recording time of 3 hours at 4K.

Sony F55 with EVS XT3 and AJA Corvid
The Sony F55 was positioned close to camera 1 (the main camera for the HD production) high at the middle of the arena and featured a 85x fixed lens. The camera was tied electronically to an EVS XT3 and an AJA Corvid. This combination enabled the operator to zoom into the picture and to replay the particular part in slow motion.

Right from the beginning the EVS XT3 server platform was designed to be future-proof and was developed with massive internal bandwidth and processing power. Most importantly, it was built to be flexible in configuration, allowing bandwidth, I/O and storage capacity to be determined to suit the application. This allowed the configuration of four 3G SDI feeds as a single logical channel. This was the form in which the 4K signal from the F55 camera was received.

Importantly, the flexible configuration of the XT3 server means the four channels are bonded, so a standard LSM control panel was used to control the 4K recording and replay. LSM operators will need no further training, and will notice absolutely no difference in working with 4K content, apart from better pictures on the monitors. 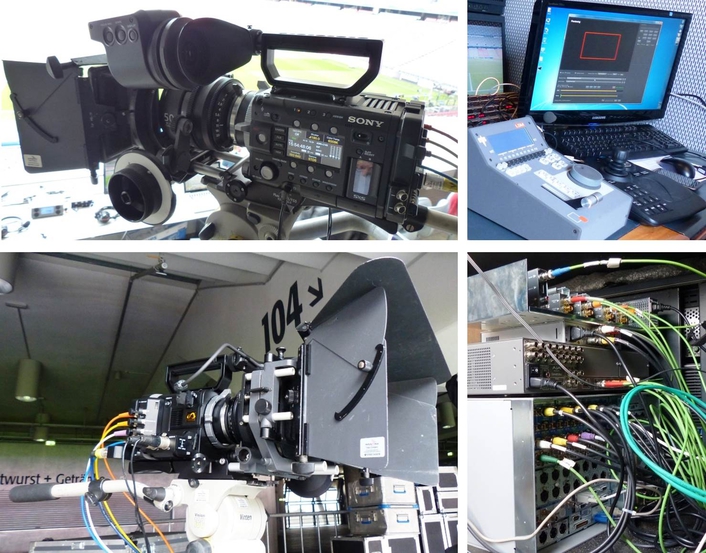 The use of the standard XT3 platform means that all the functionality of the server remains available, including off-speed playback for slow motion replays. Together with the AJA Corvid the solution addressed the option of zooming in to a 4K picture. However EVS servers have long supported a feature called Target Track, which allows an operator to identify an area of the picture and zoom in to it. This function will soon evolve to be available even when physical server channels are grouped into a single logical channel to support 4k. 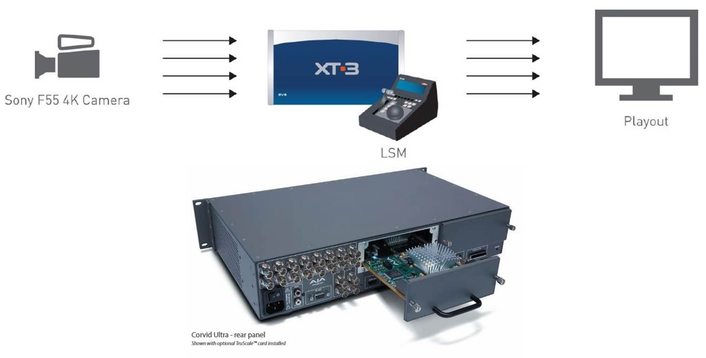 For the Champions League match in Munich the XT3 4K solution was configured as a one in, one out system, allowing continuous recording of the camera output while simultaneously providing random access replays of any 4k content on the server. However the processing capacity of the XT3 is sufficient to support three 4k channels, either two records and one replay or one record and two replays. 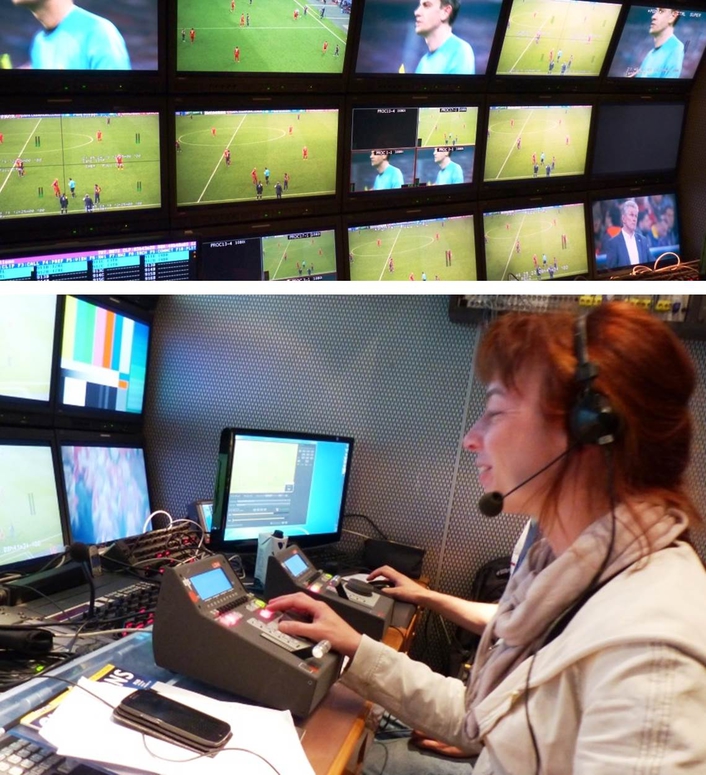 Already today EVS can support one or two ISO 4K cameras for zoomed replays into HD. This configuration was set up in a separate production suite in the TopVision tender truck. Here the signal from the F65/PsiTech application and the signal from the F55/EVS/AJA application were recorded onto another EVS XT3. The two signals were available to an EVS operator on one LSM and edited signals from both 4K sources were offered to the director responsible for the HD production of the international signal of the match.

The HD Production
And by the way: The host broadcaster Sky Deutschland had ordered TopVision to produce the international signal of the match. TopVision’s HD OBVan 5.1 was on location and covered Barcelona’s nightmare and Munich’s dream in HD with 22 cameras including three UltraMotion cameras from LMC. 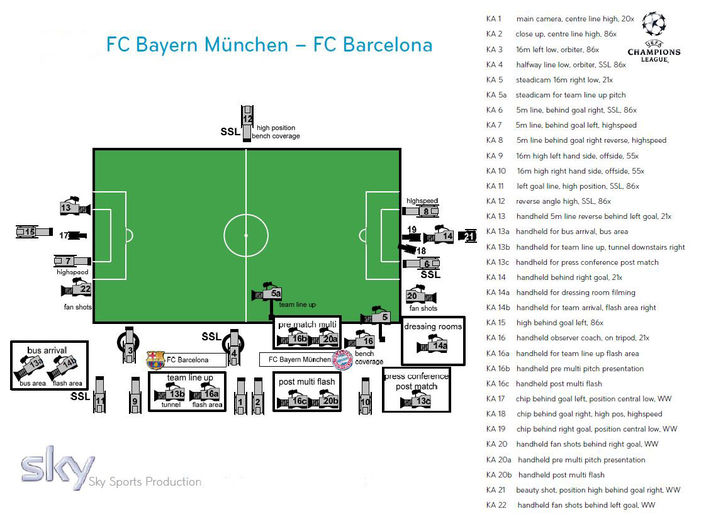 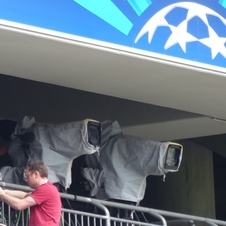 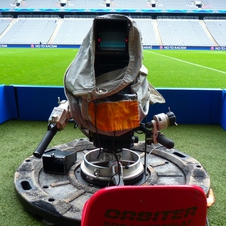 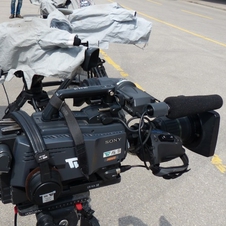 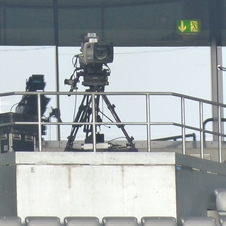 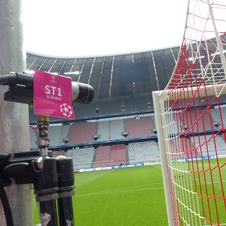 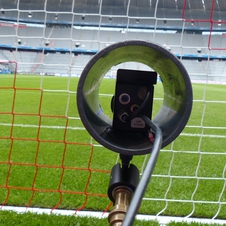 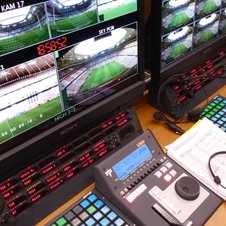 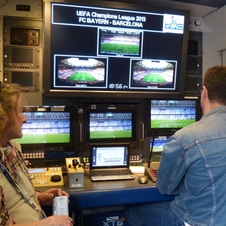 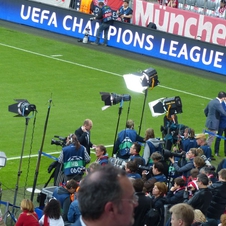 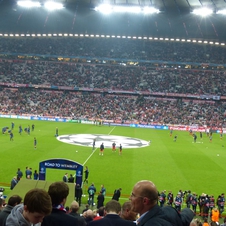