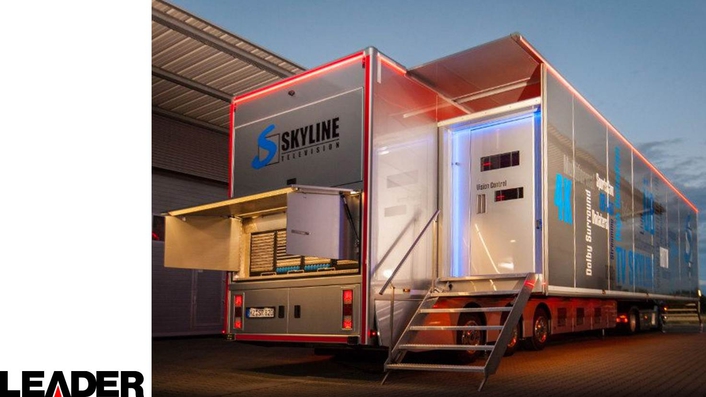 "Like OB8 itself Leader LV5490 packs a huge number of resources into a very compact footprint," comments Martin Kreitl, Head of Sales & Marketing at Band Pro Munich which negotiated the sale.

"The ability to handle 4K, UHD, HD, SD and even sub-SD in a single unit is ideal in any studio system and even more so for a mobile production team.

"TV Skyline's OB8 can handle up to 30 camera chains so checking and matching the output from each of these will be a major application for the LV5490."

Occupying a compact half-U width by 4U high housing, the Leader LV5490 allows waveform, vector and picture display to be viewed at the same time on its integral 9 inch LCD monitor. The monitor is full 1920 x 1080 resolution HD with wide viewing angle and high-quality colour reproduction. An HD DVI and HD-SDI rasterized output is also provided to feed a larger monitor. Simultaneous viewing of up to four SDI inputs is possible, including overlays. The size and location of individual channels can be adjusted on the display using a USB mouse so the user is not limited to fixed-size quadrants. The LV5490 can also be controlled remotely using standard KVM tools. Additional features of the LV5490 include video frame capture, instrumentation screen capture, timecode display and ID display. 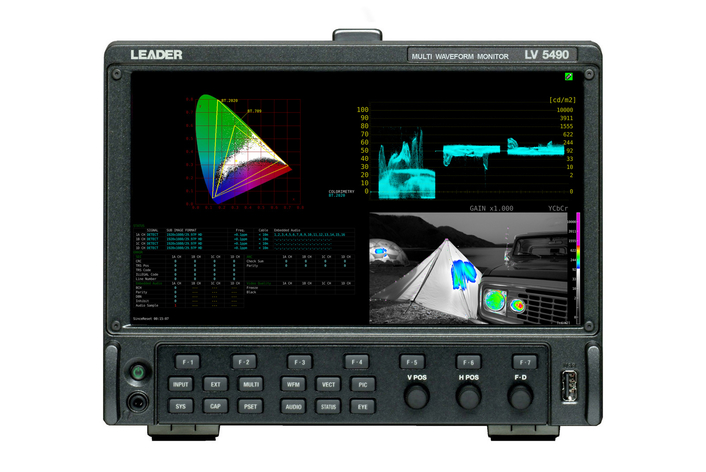 Leader also produces a 3G/HD/SD version of the LV5490. The LV5480 can be upgraded to an LV5490 quickly and easily at any time after purchase and accepts the same range of options.

TV Skyline
TV Skyline is located in Mainz, next to ZDF, Germany’s biggest public TV station. It has over 25 years of experience in providing television production support services, covering a topics such as big TV shows, classical concerts, major sports events, business and politics. It has a fleet of five OB vans including the modern XL sized OB7 and OB8UHD, an SNG vehicle, editing vehicle and multifunctional van. It also has two studios. TV Skyline further owns special cameras including Qube:Cam, Sports:Cam, InGoal:Cam and a premium-class flight-pack system, developed in-house. Other cameras include Birdy 5.0, NAC Hi-Motion II, GV LDX86N UHD cameras, 3G wireless camera systems, crane-cam and track-cam, remote heads and HD1200 chip cams, so it can cover almost any broadcast requirements. This and activity in Asia as well as new markets like e-sports demonstrate Skyline’s versatility and readiness for future.

Leader Electronics Corporation
Since its establishment more than 60 years ago, Leader has earned a worldwide reputation for designing and manufacturing some of the most reliable, practical and cost effective electronic instruments available. The products were originally developed for production testing and servicing. These are applications in which ease-of-use and highest reliability are essential. By expanding into a broad line of industrial and video instruments, Leader was able to add to these fundamental qualities a cost-performance ratio unequalled in the industry.
Manufacturing quality is built in every step of the way. Only the finest parts are used for optimum reliability. At each production run, sub-assemblies are separately tested before they are integrated into the finished product which is then further tested. Less than 1% of all Leader products made are ever returned for warranty repair or adjustment. Leader products, ranging from 4K waveform monitors to rasterizers and video test equipment, are specified for research, development, broadcast, production and service applications.
Re-established in 2015 by Leader Electronics (Yokohama, Japan), Leader Electronics Europe  provides customer support, sales and marketing services both for Leader and a select number of high-technology manufacturers with specific focus on the broadcast and professional video market.
Leader Europe operates a fast, efficient and highly experienced sales and support channel. Leader Europe has offices with local representation in the UK and an extensive channel partner network across Europe, providing pre-sales and post-sales service and support.