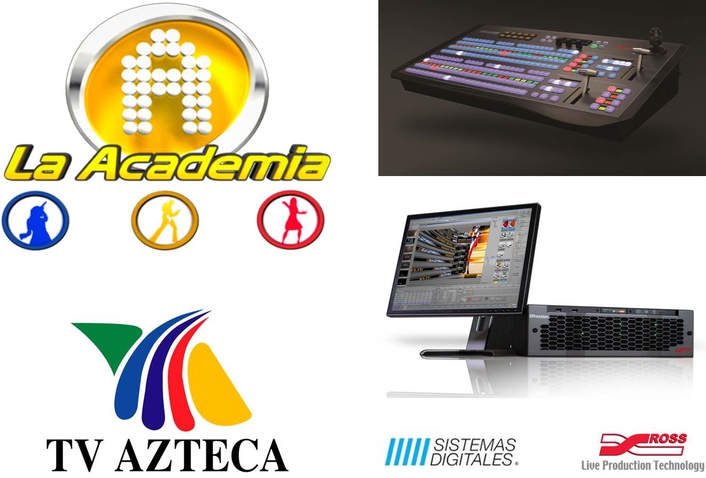 Ross Video and their local rep in Mexico, Sistemas Digitales partnered with TV Azteca providing an XPression CG and Carbonite switcher configured to their expectations. TV Azteca is a current user of Ross’ CrossOver and Vision Production Switchers, XPression CG, and is the first Television Station in Mexico using an OverDrive Automated Production Control System for their News.

"As broadcaster, we want the people stay at home enjoying our live production. Reaching homes free-to-air with 3DTV content was our main challenge,” said Roman Gomez, Director of Engineering,TV Azteca.

"The target was to select technology partners that fulfill the quality requirements and the enough flexibility to react facing to new challenges." Jesus Sanchez, General Director of Technology, TV Azteca added, "We are very proud not only of being pioneers of broadcast 3DTV, as well as of the result of the final product that we are delivering."

About TV Azteca
Azteca is one of the world’s two largest producers of Spanish-language television programming. It currently owns and operates two national television networks in Mexico, through its more than 300 owned stations. Its channels are Azteca 13 and Azteca 7.

August 21  6:00 PM (Mexico) was Azteca América's D-day or, actually, 3D-day. Why? Because Mexico's channel 13  aired the red carpet of reality show La Academia 2011 which is produced in 3D. Immediately after, at 7:00 PM, the channel broadcasted the ninth season of the show hosted by Rafael Araneda and Bibi Gaytán.

"This was the first time in the world that a reality show was broadcasted in 3D. And this is the first 3D TV show in Mexico and Latin America," Roberto Romagnoli, VP of production and entertainment at Azteca América, said. Mondays through Fridays the audience now is able to follow the everyday life and hard work of contestants and teachers at the music, singing and dancing academy as they prepare for Sunday's performance that dazzles the live studio audience every week.

This season also welcomes special guests into the school and features a small talk-show where guests and participants are discussing  the latest academy news. "It will be a very special season because the show will receive international stars, not only artists from the music industry worldwide but also Hollywood celebrities that will join the stage of La Academia," Romagnoli said.

A MEGA 3D PRODUCTION
As for the show's production, the executive said that the team visited different shows around the world such as the Eurovisión festival -one of the largest in Europe- to learn more about the kind of quality they wanted to offer Hispanic audiences. "We want to give the audience something new," the executive said. "We had been thinking about producing a 3D show for some time now. And the company has an excellent technical team. We made sure the quality standard and the service was the best the audience could get and we have made it.... It looks like you can actually touch the people on the screen," Romagnoli said.

The show has been designed with 360 technology, not often seen in the region's TV industry. "We have one of the prettiest and highest-quality TV sets in the world," the executive said. A total of 180 people work behind the scenes to take care of every detail involved in a production this big, which started in April 2011 with auditions in the US, Central America and South America. The show managed to engage 530,000 people between 15 and 40 years old, finally choosing 35 contestants coming from different countries in the region.

"This is the company's most important project of the year, where we have invested the largest amount of money, production work, talent, hours and effort in order to conquer the audience and offer them a time to spend with their families and have fun watching an excellent TV show," the executive said.

The show also has audience interaction via social networks and La Academia is also on the internet so "viewers can take lessons of whatever interests them the most in the music, singing and dancing field," Romagnoli said. "It is a great TV show," the executive concluded.