cinec 18th - 20th September 2010
3D is on the upswing. Since the triumphant success of James Cameron’s Avatar, the film world has been looking mesmerized at the three dimensional pictures. It took the eco-tale only seven weeks to climb to number one at the box office-results and the film even managed to sink the Titanic. The earnings up to now: more than two billion US-Dollars. 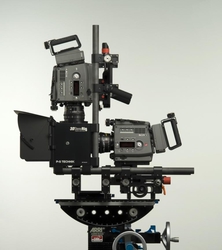 The film industry sets its hopes on the new technology. Very soon, Spiderman is supposed to swing through Manhattan’s urban canyons three-dimensionally and the largest cinema chains compete for the most screens to be converted for stereoscopic projection. The offer in the field of film shooting technology is in the process of being expanded and refined. Daring words can be already heard: Stereoscopy might become the third revolution of the cinema – like sound and colour now the new dimension is supposed to make the cinema experience unique.

Delusion or reality? At the cinec in Munich from 18th to 20th September 2010 everyone can get his own impression and lay hands on the technology. Europe’s leading International Trade Fair for Cine Equipment and Technology will set a special focus on 3D, as the industry expects a growth spurt in this field. Among cinec’s exhibitors from 20 countries, there are some pioneers of the new technology, for example Arri, which already concentrates on the entire workflow of the stereoscopy, or P+S Technik with its 3D-Rig. Numerous other exhibitors have set the course of their product range and their new developments for Stereo 3D.

But the “common” technology is not forgotten either. The branch’s leading producers will present cranes and dollies, cameras and optics, light and a lot more for film shooting and postproduction.

Eagerly awaited is Arri’s new camera system Alexa, which leads the company’s way into a digital future. In February, Arri introduced a prototype at the Micro Salon of the French Camera Association AFC, at cinec more is to be seen. Alexa is compactly and ergonomically built, easy to handle and robust, reliable and powerful when being used – with a sensitivity of up to 800 Asa.

The Grip Factory Munich will show its Dolly GF-Primo with new extended features. Mole Richardson expanded its product range of PAR-spotlights in Hollywood and Kino Flo will offer new models of its fluorescent lamps, which are distributed by Dedo Weigert in Germany. Chrosziel broadened the possible applications of its patented swing-away-system. Präzisionsentwicklung Denz will introduce the “Shut-Eye”, a heated eyecup which prevents the eyepiece lenses from fogging up on a cold film set as well as the Flange Depth Controller FDC.

The success of great films is often built on details. Find out for yourself – in September in Munich.