From the Stage to the Big Screen 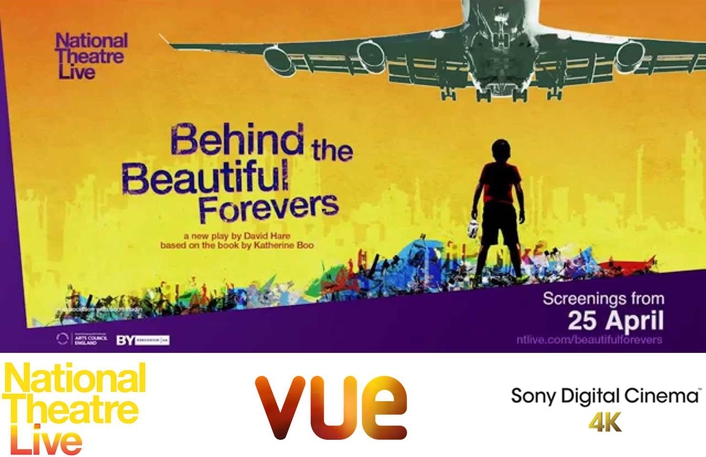 A landmark in ‘Event Cinema’, this unique three-way partnership represents the first agreement of its kind between a leading cultural brand, a cinema chain and an electronics manufacturer.

Over the next year, audiences at Vue Cinemas across the country will be able to enjoy a world-class theatrical experience without travelling far from home. The four shows will be captured with Sony cameras at 4K resolution, with four times the detail of ordinary Full HD television broadcasts.

During the 12-month tie-up, Vue customers at its 83 sites across the country will exclusively be able to enjoy the productions projected in 4K – the highest quality currently possible with commercial digital cinema projection.

Beautiful forever: 4K shines over celluloid
First fruit of the new partnership is the NT’s acclaimed production of David Hare’s Behind the Beautiful Forevers, based on the book by Katherine Boo, directed by Rufus Norris and starring Meera Syal.

Captured in 4K using Sony’s F55 cameras, the recorded performance will be distributed to Vue Cinemas as a 4K DCP (Digital Cinema Package). Stored on a hard drive or transmitted securely by satellite, this high-resolution ‘digital print’ replaces bulky reels of celluloid film that were formerly used for movie distribution to cinemas.

It’s anticipated that National Theatre Live, Sony and Vue Entertainment International will push the boundaries of event cinema even further with other technical innovations during the course of the 12-month agreement, including live 4K capture and transmission of future productions.

In August 2014, Sony cameras were used to capture the summer’s footballing action in Brazil, with images from FIFA World CupTM Final beamed live in 4K to fans at Vue’s prestigious Westfield multiplex in London. Vue Entertainment International has been a trailblazer in the switch to digital projection, with all its 755 screens in the UK now converted to 4K digital projection with the help of Sony.

“At Vue we’re constantly innovating with new ways to bring customers experiences that stand out from the ordinary“, comments Kevin Styles, UK & Ireland MD, Vue Entertainment International. “Event Cinema is an incredibly important facet of our offering that’s attracting brand-new audiences to cinemas. Our auditoriums are the perfect environment to enjoy world-class artistic and cultural events in comfort – and naturally projected in Sony 4K for the finest picture quality.”

With a unique capability extending from live production to digital projection, Sony is a key player in the growing Event Cinema market. From sports, opera and music to alternative comedy and high-profile public events, Event Cinema lets exhibitors expand their offering beyond traditional feature films and represents an increasingly important slice of box office receipts.

“If there’s a medium that’s naturally suited to the immersive detail and realism of 4K, it’s got to be live theatre”, says David McIntosh, Vice President, Sony Digital Cinema 4K Solutions for Europe and the Americas.

“Cinema Projection in 4K, delivers the best possible image quality which enhances the event cinema experience so that the performance can be enjoyed whether you are in the live theatre or watching in a cinema.  We’re hugely excited to be working with both the National Theatre and Vue Entertainment International on this project that promises to redefine the boundaries of event cinema with extraordinary new viewing experiences.”

About Sony 4K Digital Cinema
With over 18,000 systems in the market, Sony Digital Cinema 4K technology letsmoviegoers experience exceptional picture quality from every seat in the cinema– with spectacular detail, contrast and colour on any size of screen. SonyDigital Cinema 4K projection systems give audiences a more immersive,emotionally engaging visual experience you simply can't get at home – in 2D orwith a choice of smooth, easy on the eye 3D solutions. Sony 4K offers fourtimes the resolution of an HD TV or previous-generation 2K digital cinemaprojectors.4K is the choice of audiences and industryalike, winning Hollywood’s commitment with releases from Paramount, WarnerBrothers, 20th Century Fox and Sony Pictures. It’s won the support of Hollywoodheavyweights like Martin Scorsese (“The Wolf of Wall Street”), ChristopherNolan (“Dark Knight Rises”, “Inception”), M. Night Shyamalan (“After Earth”),David Fincher (“The Girl with a Dragon Tattoo”),Paul Greengrass (“Captain Phillips”) and Harald Zwart (“Karate Kid”), whohave all released blockbusters in 4K. It’s also the choice of award-winningdirector Nuri Bilge Ceylan who won the coveted Palme d'Or at the 2014 CannesFilm Festival for “Winter Sleep” that was shot in 4K using Sony’s F65 CineAltacamera for cinematic release.The onlymanufacturer currently deploying 4K projection systems in volume, Sony servesmany of the world’s biggest and most prestigious cinema chains, as well assmall independent screens and art house cinemas.