SoundField Reaches the Next Dimension in New 3D Telegenic Truck 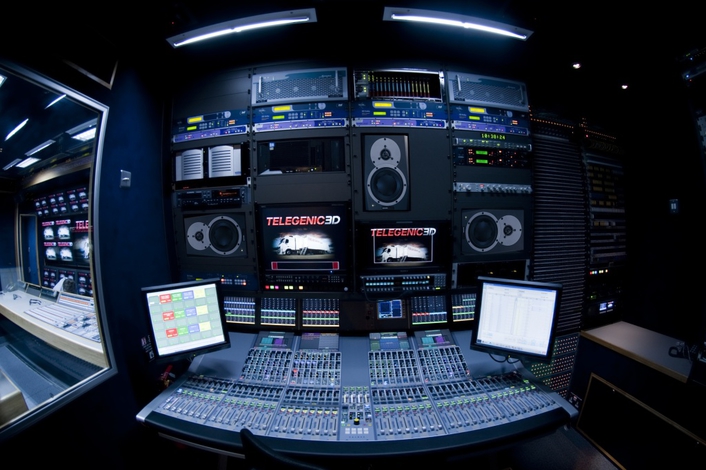 The Sound control room in Telegenic’s new 3D OB vehicle, with the DSF-3 visible above the Front Right speaker.

Telegenic, the independent UK outside broadcast services company, has installed a digital SoundField microphone and upmix processor in its new 3D OB vehicle, which entered service in the Spring. The 3D truck has been generating live coverage in 3D on a variety of sporting events for European satellite broadcaster BSkyB.

Sky has been one of the pioneers of high-definition broadcasting in Europe, offering HD visuals with 5.1 surround sound since early 2006 — but now they've already moved to the next level, with regular broadcasts in 3D going out since earlier this year, including 3D coverage of the recent World Cup. A number of outside broadcast trucks have been commissioned from Sky's regular OB service partners in the UK to meet this need, and several have already been in service since mid-Spring. One such is Telegenic's new 3D OB vehicle, which has been in use on transmissions for Sky since April, offering visuals in 3D and sound in full 5.1.

As with all OB units destined for use on Sky broadcasts, the main surround microphone in the Telegenic 3D truck is SoundField's digital DSF-2, together with the UK mic company's digital 5.1 surround processor, the DSF-3. This combination produces a completely phase-coherent, all-digital 5.1 soundscape which can be downmixed for stereo transmissions to older receivers without creating phase problems. "The new 3D truck is our fourth to feature SoundField's equipment," comments Dave Rowley, Telegenic's Head Of Sound. "It made perfect sense to Sky, and to us, to use the DSF-2 and DSF-3 to generate the 5.1 sound in the new 3D truck, as that combination has been working so well in our HD trucks. Since the 3D truck entered service, we've been using the SoundFields mainly for 3D coverage of live football and Rugby Union. Shortly, though, we'll be starting on the cricket and Rugby League, and also darts."

Also on board the new Telegenic 3D truck are two SoundField UPM-1 upmix processors, which are capable of producing downmix-compatible, phase-coherent surround from a two-channel stereo. "These are relatively new," explains Dave Rowley. "We bought them for situations where our truck is acting as the master broadcast hub for an evening's sport, where we might have to accept transmissions from another broadcaster and relay them back to Sky's transmission centre. When we're accepting broadcasts in this way from other parts of Europe — our coverage of the Heineken Rugby Cup is a good example of this — quite often the audio is still coming to us in stereo, and of course we don't really want to be outputting part of an evening's programming in stereo now if we can avoid it, especially now that the visuals are in 3D. The UPM-1 allows us to create a natural-sounding 5.1 from this kind of stereo input. Since the truck entered service, we've also been using the UPM-1s on VT output — archive material which only ever had audio in stereo — with great success."

The only limiting factor for Telegenic over the Summer has been that they have only had the one 3D truck; however, a second 3D unit, which will share the workload, is currently undergoing integration at Sony's Basingstoke headquarters. Perhaps unsurprisingly, it too will feature the SoundField DSF-2/DSF-3 combination, together with a pair of UPM-1 upmixers. "It's a proven combination," explains Dave Rowley, "and we've found the SoundFields a delight to use. We're very happy to continue with them."

UK manufacturer SoundField specialises in digital and analogue surround and stereo microphone systems for the broadcast and recording industries. Based on a unique multi-capsule design, SoundField's systems allow users to capture and output audio in mono, phase-coherent stereo, 5.1 or any future surround format, using a single microphone and processor. Over recent years, the company's digital microphone systems have become the standard means of originating discrete-channel 5.1 audio for high-definition television transmission amongst many of the world’s leading broadcasters, while their recently introduced UPM-1 upmix processor facilitates the real-time creation of natural-sounding, downmix-compatible 5.1 when stereo audio is the only available transmission format.