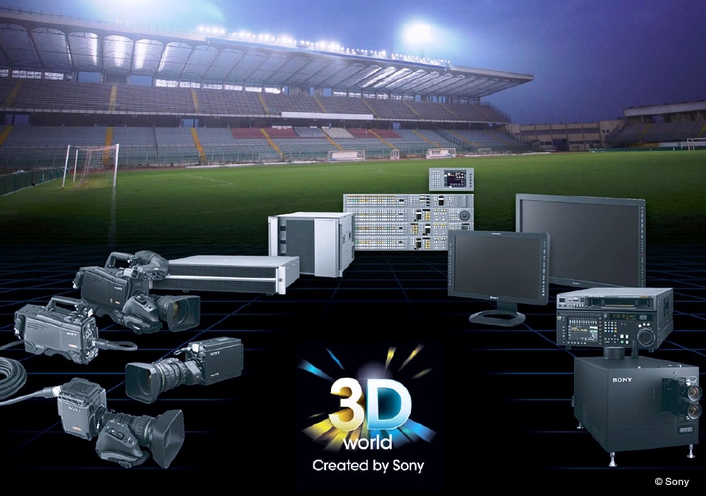 The Sony 3D Family
The world is going 3D. And at the Sony booth at NAB 3D is front and center. From cinematic spectaculars to stadium concerts to live sports on television, 3D is transforming entertainment. 3D is everywhere, adding a new dimension of realism, immersion and excitement. But the spotlight on the Sony booth this year is on 3D sports. All Mobile Video’s new 3D truck is presented at the booth and clients like HBS (working together with Sony on the World Cup in 3D), Sky UK and ESPN are around to discuss their use of Sony gear for 3D productions.

Leading the way in 3D

It's no accident that Sony’s broadcast cameras are designed to be mounted using "T" adaptors in 3D rigs. It's no coincidence that Sony introduced new versions of HDCAM SR recorders with 3D capability built in. The MVS-8000X video switcher offers 3D production capability as well as a line-up of 3D monitors and Sony’s new MPE-200 3D Processor provides a variety of digital alignments to stereo imaging HD cameras, allowing a control experience similar to the use of mechanical servos. But this is just the beginning. Sony continues to address the formidable challenges of 3D workflow, to make 3D a practical reality for professionals at every level.

New production switcher announcements have become a tradition for Sony at NAB, and this year’s line-up features the MVS-8000X with its 3D capabilities.

The MVS-8000X has become a standard in live and control room production. The new MVS model provides a bridge from 2D 720P and 1080i high-definition production to the growing need for 1080P/59.94 3Gbps and 3D stereoscopic production capability.

The MVS-8000X is multi-format and fully scalable up to 5ME and 200 input/100 output, including dedicated interfaces for DME at 3Gbps 1080P/59.94. The switcher’s 3D-on-3G mode enables the full performance of 5MEs and simplified operation for 3D production. In 3D 1080i/720P mode, complex link settings are not necessary since 2D and 3D signal sources can be assigned to crosspoint buttons, enabling flexible production of 2D/3D sources. If the left and right signals are reversed, users can exchange signals easily through the switcher’s menu display. The Digital Multi Effects of the MVS system can adjust depth for 2D graphics using a newly supported Parallax menu. 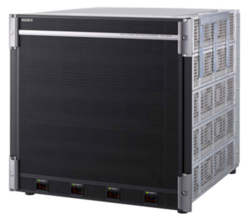 The MVS-8000X processor (1080i/720P) incorporates eight keyers with digital video resizers, border generators, and advanced chroma key, all as standard; and an advanced frame memory system, including 16 channels of still and clip recording and playback, available as an option. Also available are format converters, including up-, down- and cross-conversion for both inputs and outputs; and color correction, featuring RGB and six-vector correction modes. The MVS-X offers powerful MultiProgram2 technology, which allows splitting a single ME to two Mix/Effect sections. This enables 5ME systems to perform with the equivalent capabilities of 10ME, with four keyers for each ME. 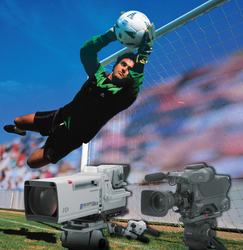 3D begins with a pair of cameras capturing images from the position of both the right and left human eyes. 3D ends with a display and glasses capable of presenting these images properly to the left and right eye. Sony can capture the image with a range of cameras suitable for 3D mounting.

The HDC-1500 Series portable camera is a fixture in television studios and major league sporting venues. Sony has created an option for even smaller size and lighter weight. The HKC-T1500 adaptor enables operators to actually take the "business end" of the camera, the CCD block, out of the body and shoot with it. It's perfect for today's 3D rigs.

For even greater portability, Sony took the essence of the HDC-1500 Series and built it into an ultra-compact point-of-view camera. Because side-by-side 3D rigs put an emphasis on slender cameras, the HDC-P1 is just 86 mm (3-1/2") wide. Features include three full HD 2/3-inch CCDs, 1080i and 720p possibilities, even Neutral Density and Color Correction filter wheels— everything professionals expect from a Sony camera.

Designed to reduce the amount of mechanical adjustments made to 3D camera rigs during live shoots, Sony’s new MPE-200 3D Processor provides a variety of digital alignments to stereo imaging HD cameras, allowing a control experience similar to the use of mechanical servos. 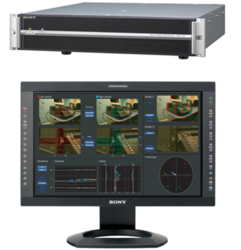 Each multi-image processor displays actual camera images with waveform information that indicates alignment and set-up errors. Operators can use this information to identify problems and easily correct them by changing various parameter values at their computer while watching the GUI. They can also take "snapshots" of frequently used settings and store them in a "shot box" to be recalled as needed.

These capabilities free the camera operator from having to visually detect errors and spend considerable time adjusting and readjusting the cameras. Using the MPE-200, operators can receive critical adjustment information from their monitors, making camera setup faster and more reliable.

The MPE-200 can also convert the results into various transmission-ready formats, for example side-by-side or top-and-bottom images for viewing on a monitor, or a signal suitable for broadcast. 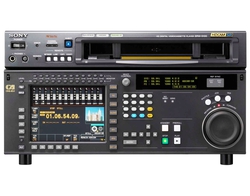 Sony is also announcing new versions of its popular SRW players and recorders. The updated SRW-5800/2 recorder deck will be available this summer. It will support 2K recording and playback at both 2048x1080 and 2048x1556 modes, MXF file transfer of the SStP codec and the new “SR-Lite” 220 Mbps data rate, and 96KHz audio. It also supports double speed record and playback, as well as 3D content record and playback of 4:2:2& 4:4:4 RGB. Customers who own current SRW-5800 models will be able to add this new feature set to their existing devices with the addition of an optional HKSR-58UK upgrade kit available this summer. 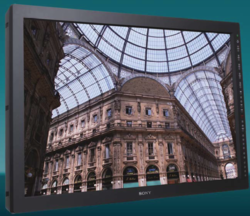 That's why Sony has created the LUMA™ Series LMD-4251TD and LMD-2451TD. These cover a range of applications with 42-inch and 24-inch screens (1067-mm and 613-mm viewing area, measured diagonally). A micro polarizer screen attached to the LCD panel works inconjunction with supplied passive 3D glasses to separate right-eye and left-eye images. Because the glasses use circular polarization, you'll see virtually flicker-free 3D images, a huge advantage when you're spending countless hours in front of the monitor. As with other high-specification LUMA monitors, these models offer Sony's ChromaTRU™ color matching, full HD resolution and wide viewing angle. With optional dual-stream HD-SDI interface boards, these monitors support 1080/59.94i, 1080/50i, 1080/24PsF and 1080/23.98PsF signals 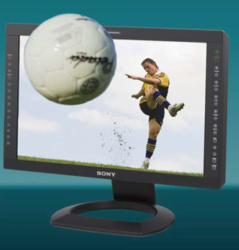 The hallmarks of these monitors are their highly acclaimed Sony-unique ChromaTRU color matching technology, and a full-HD (1920 x 1080) resolution professional LCD panel with an excellent wide viewing angle – developed without compromise because user convenience has top priority. With their dual-stream HD-SDI*3 interface, these two professional monitors support HD signals including 1080/59.94i, 1080/50i, 1080/24PsF, and 1080/23.98PsF formats.

3D Truck for All Mobile Video 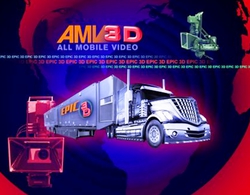 From the rock concert to the basketball arena to the football field and the soccer pitch, Sony equipment is well established in 3D live production.

All Mobile Video (AMV) was working with Sony Electronics to build the 3D truck, which now is presented on Sony’s booth. It incorporates a variety of Sony gear including cameras, switchers, tape decks and production monitors. While Sony is sponsoring ESPN's new 3D channel as well as the 3D production of 25 games at the 2010 FIFA World Cup,

"Nobody has the complete handle on what is required in terms of 3D live acquisition, so we're working with Sony, and with Fujinon on lenses, to put together the best possible configuration we can for deployment. This is hard cash, it isn't a freebie. We have to put our money where our mouth is, and we're putting out best foot forward in trying to deal with 3D acquisition" said AVM president Eric Duke.

"3D is the new technology requirement for live production," added Alec Shapiro, SVP of sales and marketing for Sony's Broadcast and Production Systems Division, in a statement. "We're proud to take our relationship with AMV to a new level, developing a cutting-edge platform that will provide the ultimate in image quality, performance and flexibility, while delivering the unique 3D viewing and entertainment experiences that consumers now expect."

The new 53-foot long double "Expando" truck, which will also be capable of conventional HD production, will be similar in design to All Mobile Video's existing Titan unit and will support 3 gigabit-per-second operation, enough to handle two uncompressed HD feeds.

As for 3D projects in Europe, Brian Lenz, director of product development for Sky, is explaining that two years ago, Sky was investigating how to use Sony 2D tools in a 3D environment. “We needed to figure out how to produce reliable 3D content week in and week out because that is the only viable way it will get into consumers’ homes,” he says. “Once we committed ourselves to this crazy venture, the channel has been up and running since the first weekend of April and for our weekly coverage of a Premier League game we needed a purpose-built truck.” Sony and Telegenic worked together (alongside 3ality Digital) to build the truck that today is delivering Premier League Football to pubs throughout the UK.

However the Sky effort isn’t the only football-related 3D project Sony is working on. Peter Angell, Director of HBS’ Production Division, explains that Sony will play a key role in providing equipment to deliver 25 matches of the FIFA World Cup to the world in 3D.
“One of the first questions I get is, why only 25 matches?,” says Angell. “When we made the decision last September, we had to make a few key assumptions, and one of them was about the reliability of the technology and human resources. At the time, we felt we could get two OB units’ worth of 3D equipment and people.”
At least seven pairs of cameras will be used for each match, with cameras positioned lower and closer to the field than for a 2D production. “Production technique is the key to high-quality 3D feeds,” says Angell. “And we want to tell the story of each match with high-quality, immersive images.” 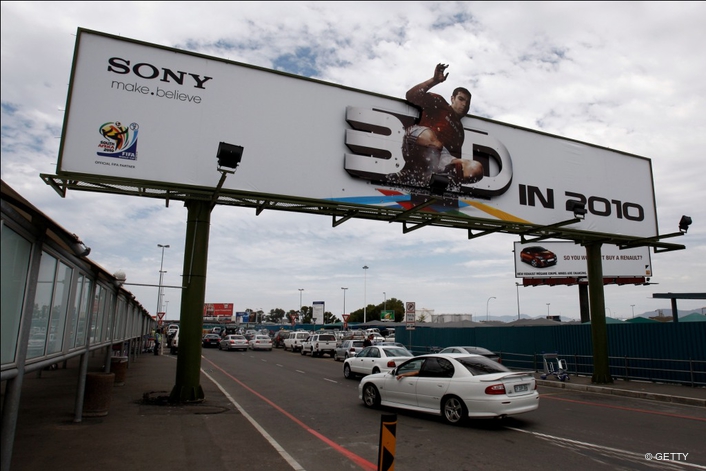 FIFA and Sony announced to cover 25 Games in 3D