25 Games of the FIFA WC were produced in 3D using Sony 3D Equipment
Reinforcing its commitment to 3D production, Sony unveiled a number of new additions and enhancements to its flexible, end-to-end 3D live production solution. At this year’s IBC show, Sony Professional is showcased different 3D workflow setups to demonstrate that each and every 3D project needs to have a tailored solution to ensure premium quality 3D acquisition and production. 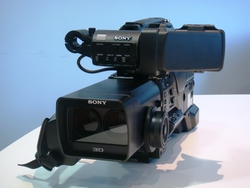 Sony has showcased its first 3D shoulder camcorder prototype, the optical fiber adapter HFDA-200, new software options for the revolutionary MPE-200 hardware that will enable 2D to 3D conversion, an innovative picture stitching application and a 3D capable video effects unit for the MVS-8000 family. IBC will also see the launch of Vegas 10, the latest version of the popular editing software will facilitate native 3D ingest and editing. Visitors to the stand will also be able to see Sony professional 3D monitors in both 24” and 42” dimensions.

The new addition to Sony’s 3D workflow portfolio is its first 3D shoulder camcorder prototype. It is being designed to offer increased mobility and flexibility for field use and provide high quality 3D content. Still in the development stage, this prototype was unveiled on the Sony stand at IBC.

The hugely successful World Cup project saw Sony technology enable the live broadcast of 25 games in live 3D to a global audience. A key component of the broadcast chain was the MPE-200 Multi-Format Image Processor. This unit enabled the production of high quality 3D images in real time, maintaining perfect camera alignment for any zoom position throughout the event. Using feedback gathered in South Africa, and at other live productions Sony demonstrated the latest upgrade to the software MPES-3D01, V1.20, powering the MPE-200. The new software, planned for release in October, will add extra automatic alignment capabilities for the configuration and set up of the cameras, as well as a number of other operational features requested by users.

Sony’s MPE-200 hardware can have a range of software packages applied to it, enabling it to be used in a multitude of broadcast scenarios. At IBC Sony will announce three new software packages which can be installed on the MPE-200.

Firstly - An application which will enable the conversion of 2D images into 3D. The software package, MPES-2D3D1, available before the end of 2010, will be ideal for the production of 3D images from camera positions where the mounting of 3D rigs is impossible. For example, goal net cameras or helicopter panoramas where space and weight issues prevent the positioning of rigs. Using the 2D images from these cameras the MPE-200 box will convert video into high quality 3D.

Secondly - Sony will also be showed the latest in its picture stitching technology. Due to be commercially available before Spring 2011, picture stitching uses three co-sited cameras to produce one panoramic image. The image streams from the mounted cameras are stitched together to form one overall picture. From this an operator can create a virtual camera and position this according to the on screen action, allowing broadcasters a view of any point of interest in the scene. The software can also be programmed with additional depth information, for example a football stadium; to artificially create a 3D view of the scene.

Thirdly – The ability to overlay graphics is crucial in live production and Sony will be making this possible with an addition to the MVS range. Sony demonstrated an innovative video processor companion for the MVS-8000 family of production switchers. This software package, MPES-FX01 for the MPE-200, when used in conjunction with an MVS-8000 series switcher, will enable 2D and 3D graphics to be overlaid on 3D video in real-time. 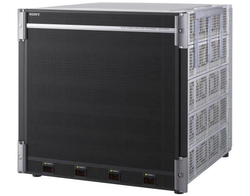 The MVS-8000 switcher is a key component of Sony’s end-to-end 3D solution. Having been used as part of the World Cup production setup this product has already proven its value at the biggest football event in the world. At IBC Sony showed the latest addition to the range; the MVS-8000X. This switcher can handle 3D images directly from the camera and also supports 1080/50p productions. As the latest model in the highly successful MVS range, it is set to become an integral part of customer’s 3D production workflow.

To simplify cabling set ups, Sony also introduced the HDFA-200 optical fiber transmission adapter. This enables the transmission of two HD cameras’ image over a single SMPTE link to a dedicated 3G CCU. Thanks to video, intercom, control signals as well as power transmission through this link, a full system operation of both cameras is ensured. The HDFA-200 system also allows a single RCP to control the camera pair and has been designed to specifically work with Sony’s HDC-P1. The HDFA-200 can thus provide dedicated a 3D live production camera system. 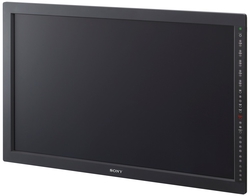 Beyond the pure workflow aspects, 3D stereographers need to be able to view a pixel perfect representation of the images being captured. Also used during the World Cup Production, Sony’s 3D professional monitors will be available as full production units from October. Based upon high grade LMD 51W series chassis that provide unrivalled picture quality, the professional 3D monitors will be available in 24” and 42” models. The 3D monitors will offer new 3D display features and a wide choice of inputs, including 3G SDI; HD-SDI (field sequential; side by side; dual stream left and right channels) and DVI line interleave (line by line). In addition, the unique lightweight and comfortable 3D glasses BKM-30G are optimized for professional use with the 3D monitors.

“Sony has learnt a lot over the past year. Our experiences and successes with the World Cup have demonstrated our capability to provide an end-to-end sophisticated 3D live production workflow and we can now take the next step to share this experience and knowledge with the industry,” commented Andy Hotten, Group Leader, Sony Professional.

There is no doubt that an ever increasing number of events will be produced in 3D and Sony will continue to innovate and provide solutions to support and encourage the adoption of this technology. As part of this commitment Sony will be opening a 3D centre of excellence at its European headquarters in Basingstoke, UK. The centre will provide training and assistance to broadcasters looking to adopt 3D and will be opening in Autumn 2010.

“Our training centre will offer production specialists and broadcast entrepreneurs the chance to evolve their own 3D content based on the technology and skills we have developed and practised. We look forward to opening our doors and will be proud of our future graduates,” concluded Hotten.

Sony Professional, a division of Sony Europe, is the leading supplier of AV/IT solutions to businesses across a wide variety of sectors including, Media and Broadcast, Video Security and Retail, Transport & Large Venue markets. It delivers products, systems and applications to enable the creation, manipulation and distribution of digital audio-visual content that add value to businesses and their customers. With over 25 years’ experience in delivering innovative market-leading products, Sony Professional is ideally placed to deliver exceptional quality and value to its customers. Sony's Professional Services division, its systems integration arm, offers its customers access to the expertise and local knowledge of skilled professionals across Europe. Collaborating with a network of established technology partners, Sony delivers end-to-end solutions that address the customer's needs, integrating software and systems to achieve each organisation’s individual business goals. For more information please visit