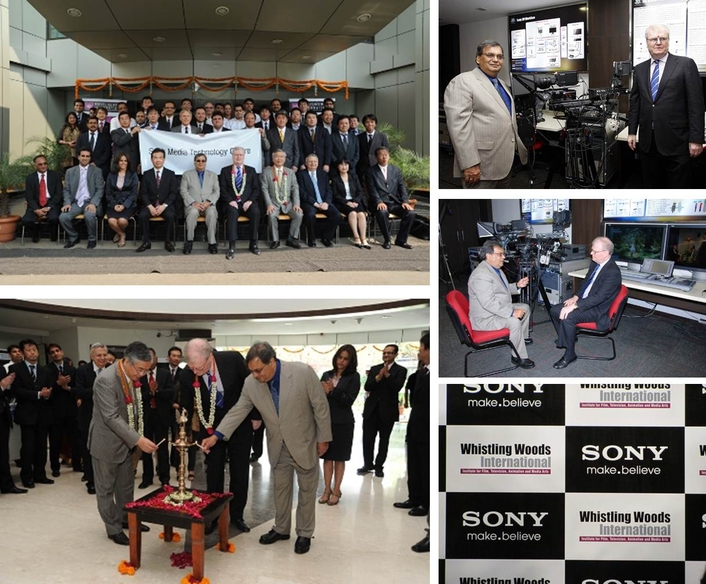 Sony has collaborated with WWI, which is a leader in the media and entertainment education sector to establish the facility at the Mumbai campus of WWI. India's motion picture industry is flourishing with over 1,000 annual releases, which is the highest in the world. However, while movies have widely become the accepted form of entertainment, most Indian movies are still produced using celluloid. Through SMTC, Sony will provide its expertise in High Definition (HD) and 3D film and broadcast technologies as well as focus on the proliferation and development of these technologies in India's entertainment industry.

Sony is targeting sales of more than 1 trillion yen (approximately $12 billion) from 3D-related product businesses by the end of fiscal year 2012 (ended March 31, 2013) including consumer and professional products and game. The 3D market is expected to expand rapidly and the creation of optimum, high-quality 3D content is essential to this growth. Sony will strongly support the creation of an environment that facilitates such 'good' 3D production, continuing an effort launched a year ago with the opening of its first Sony 3D Technology Center in Los Angeles where more than 1,000 industry professionals have visited and trained to-date.

Sony has installed top-of-the-line HD and 3D content creation and digital cinema projection equipment in WWI. In addition, it will provide its knowhow in HD content creation from acquisition to post-production of content. It will also teach the entire pipeline of 3D filmmaking and methodology and provide training for high quality 3D content creation.

Speaking at the conference, Sir Howard Stringer said, "We are delighted to be able to share Sony's unparalleled expertise in 3D content creation with aspiring filmmakers and industry professionals from across the vibrant Indian film and broadcasting community. The Sony Media Technology Center will provide a forum for us to offer our latest High Definition & 3D technologies, products and knowhow and contribute to the further growth and development of the Indian entertainment industry."

Elaborating further on this unique initiative, Mr. Subhash Ghai added, "Right from its inception, Whistling Woods has been a place for exchange of ideas and experiences between practicing filmmakers and students. The Sony Media Technology Center is an effort in continuing the same line of thought where, the best of new technology and filmmaking tools in the fields of High Definition and 3D filmmaking are available to both the student as well as the film professional. Both are most welcome to use the facilities, attend the training workshops and courses we will run and familiarize them with the technology of the future, and thereby strengthen the film industry and further the art of film-making."

Through the SMTC, Sony and WWI aim to develop and enhance India's entertainment industry by popularizing HD and 3D content creation.

Promoted by Subhash Ghai, Mukta Arts Limited & Filmcity Mumbai, Whistling Woods International is Asia's largest Film, Television, Animation and Media Arts institute, providing world-class education in all technical and creative aspects of Film & Television, offering courses that vary in duration from 10 months to 30 months, in the areas of Acting, Animation, Cinematography, Direction, Editing, Producing, Screenwriting and Sound.Rated among the 10 best film schools in the world by The Hollywood Reporter in 2010, WWI boasts of a excellent faculty comprising the best names of the Indian motion picture industry. With its alumni now playing key roles in the Indian film industry, Whistling Woods strongly marches towards fulfilling its goal - to be the institute of choice for media education globally.

Sony Corporation is a leading manufacturer of audio, video, game, communications, key device and information technology products for the consumer and professional markets. With its music, pictures, computer entertainment and on-line businesses, Sony is uniquely positioned to be the leading electronics and entertainment company in the world. Sony recorded consolidated annual sales of approximately $78 billion for the fiscal year ended March 31, 2010.