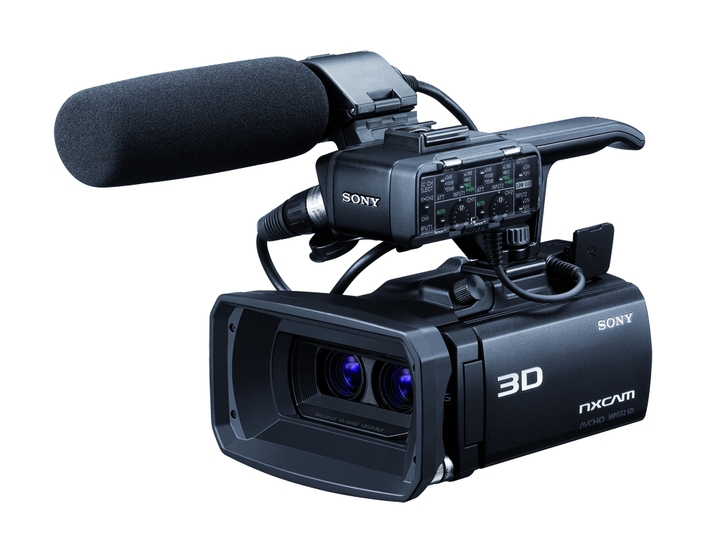 The NX3D1 has twin Sony G Lenses and ¼-inch Exmor R CMOS image sensors that can record Double Full HD 3D content into a single file. A 3.5-inch LCD panel allows you to view content in 3D without using glasses.

The HXR-NX3D1 also has a 10x optical zoom, 96GB internal memory and supports LPCM Audio. It can shoot conventional 2D up to 1080/50P for the complete production flexibility.

This product comes with PrimeSupport – fast, hasslefree repairs and a helpline offering expert technical advice. Which gives you the peace of mind that Sony is looking after your equipment, and your business.

One of the most important considerations during 3D shooting is obtaining stable images to prevent audience discomfort during viewing. The HXR-NX3D1 features Optical SteadyShot with Active Mode, 3-way camera shake stabilizing technology that smoothes out up/down, left/right and rotational motion when shooting in 3D. Capturing stable 3D images with minimal shake is possible even for hand-held shooting.

When shooting in 3D, the HXR-NX3D1 lets you zoom from 34.4mm to 34mm (when converted to 35mm equivalent). Frame composition while zooming is also possible just like in 2D shooting.

The HXR-NX3D1 features two parallel lenses mounted 31mm apart. (the inter-axial distance is 31mm) Disparity adjustment can be performed to change the read-out areas of the left and right CMOS sensors so that they are closer together or further apart. This lets you control perceived 3D depth and the proximity of regions of interest to a virtual screen. Disparity adjustment is also possible during shooting using the manual dial. Moving a region of interest closer to the virtual screen enables shooting of comfortable 3D images with the desired feeling of depth.

Output from the HXR-NX3D1’s HDMI jack to a 3D TV is selectable between Frame Packing with Full HD output of alternate left and right images, and Side by Side with output of horizontally compressed left and right images packed into a single frame. Select the Frame Packing mode for a 3D TV (Sony BRAVIA) and the Side by Side mode for a professional 3D monitor. Connection is also possible via an HDMI-HD-SDI converter to enable compatibility with a wide range of 3D monitors.

The detachable handle has a compact, ergonomic design. Two balanced XLR audio inputs are built in with phantom power and attenuation options that professional shooters require for clean sound quality. Default audio settings for XLR recording are highlighted in green for easy reference in the field in order to reduce operator error under difficult lighting conditions.

The HXR-NX3D1 has 96GB of internal memory, enabling extended recording in 3D mode for approximately 7.5 hours. There’s also a multi-card card slot that lets you record onto Memory Sticks and SD Cards. You can also use these convenient recordable media to copy data from the internal memory. 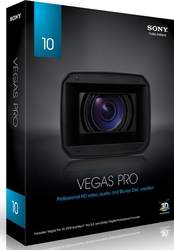 Easy workflow is an important consideration when creating 3D footage. The HXR-NX3D1 uses Multi-View Coding (MVC) to record left and right channel clips as a single file. Sony Vegas Pro 10.0d offers native import support for MVC video files, so footage can be directly handled as 3D clips to enable import of left and right channel clips together. By eliminating the need for time-consuming pairing, this provides an extremely simple workflow.

And Vegas Pro 10.0d provides the ability to adjust, edit, preview, and output stereoscopic 3D Blu-ray Disc and 3D media with side-by-side, top/bottom, or linealternate encoding. Support is scheduled to enable conversion of MVC footage recorded with the HXR-NX3D1 to Cineform codec using the popular Cineform Neo3D/NeoHD as a Codec Plug-In for 3D editing.

The supplied Contents Management Utility 2.1 software also enables conversion of MVC video files to 2D AVC files with independent left and right channels. With these capabilities the HXR-NX3D1 is ready for a wide range of workflows.

Direct Copy to External HDD Without a PC

Important shots can be backed up by copying footage directly from the HXR-NX3D1 to an external hard disk drive (sold separately) without the need for a computer. The HXR-NX3D1 can also access videos stored on the external hard drive for playback on a 3D HDTV, allowing you to utilize the camcorder’s handy 3D playback features.