Sony Extends its ‘Beyond HD’ Vision

The launch of innovative new tools for 4K acquisition and production
Sony has a proud history of technical innovation and product development, enabling professionals to create content to excite their audience and take the viewing experience to the next level. It was at the forefront of the transition from analogue to digital production and led the development of technology for High Definition.

Sony is now building on this heritage to create tools to enable users to implement an end-to-end 4K production workflow. A 4K image carries more than four times the information of HD, delivering an astonishing improvement in image quality. To date, the tools required for 4K production have typically been employed for high-end applications such as feature films, big budget commercials and top-end TV drama. Sony is today announcing a substantial number of new 4K-capable products to bring 4K production within reach of a much wider audience.

Throughout its history, cinema has used film as its recording medium. More recently, digital technology has also played a major role. In 1999 Sony released its first HD digital camera system for motion picture capture, a milestone in the shift toward digital production. In 2006, Sony launched the world’s first 4K digital cinema projector, leading to widespread adoption of digital projection in theatres. In January this year, following the introduction of Sony’s 8K-sensor F65 CineAlta camera, an entire 4K workflow, from image capture and post production, to viewing was achieved with a line-up of 4K products and an open SRMASTER alliance partnership with leading industry manufacturers.

Open platform innovation
At the heart of this announcement is the introduction of Sony’s new XAVC open format. XAVC uses the MPEG4 AVC/H.264 compression codec and is the key to the development of a family of production tools for a range of high quality applications. It supports High-Frame-Rate HD as well as 4K imaging, and fourteen leading companies in the industry to date have indicated an intention to license the technology. 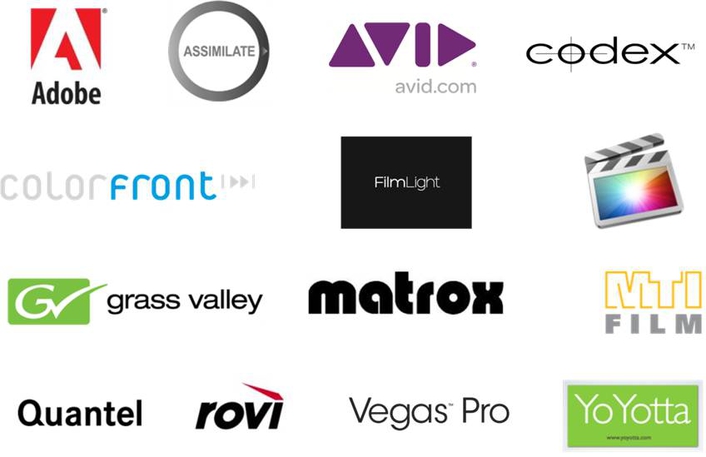 Two new additions to the CineAlta™ camera family
In addition to XAVC, Sony is also announcing the launch of two new CineAlta™ 4K cameras, the PMW-F5 and PMW-F55. The new cameras join Sony’s established line-up of Super35mm cameras positioned between the PMW-F3 and the exceptional 8K-sensor F65 CineAlta Premium 4K camera. The PMW-F5 and PMW-F55 are equipped with newly developed Super35mm 4K CMOS image sensors and give content creators new levels of flexibility and creative options for HD, 2K or 4K acquisition and production.

Both cameras offer multi-codec support featuring Sony’s new XAVC MPEG-4 AVC/H.264 format, the SR codec (MPEG4 SStP) and the industry-standard High Definition XDCAM 50Mbps 4:2:2 codec. In-camera recording is to Sony’s new SxS media, SxS PRO+ (plus), which can be used to record XAVC in HD High Frame Rate and in 4K at up to 60fps (in the PMW-F55), and XAVC HD at High Frame Rate (in the PMW-F5). In addition to on-board recording onto SxS PRO+, the PMW-F5 and PMW-F55 can also be connected to the new AXS-R5 RAW recorder for the capture of pristine images in RAW format.

Sony is also at an advanced stage of developing an HXR-IFR5 interface unit, allowing the Full-HD Super Slow Motion NEX-FS700E camcorder to capture stunning 4K RAW footage with the AXS-R5.

The PMW-F55 features a global shutter to eliminate rolling shutter skew and flash band, and features a wider colour gamut for exceptional colour reproduction. The cameras are further distinguished by wide (14 stops) exposure latitude, high sensitivity, and low noise. Customers can choose from a new selection of lenses and viewfinders, including the new DVF-EL100, a 0.7-inch high-visibility OLED device for the two cameras, to build a system that matches their particular requirements.

Even more power for the F65
The 20 megapixel F65 remains the flagship of Sony’s large sensor camera family. Since its first deliveries in January 2012, the F65 has been put to use on the highest profile features, commercials and TV programmes around the world. The 8K sensor-equipped F65 continues to evolve, with new features designed for the most demanding high-end imaging applications. These include a new high frame rate mode for 4K RAW recording at 120P to deliver stunning 4K images in super smooth slow motion, and image capture using the SR codec at 12-bits. Future updates to the F65 will deliver even more performance including the ability to de-mosaic at 6K.

A new monitor for 4K production
To coincide with the announcement of the new PMW-F5 and PMW-F55, Sony will launch a new 4K 30-inch LCD monitor, the PVM-X300. This 30-inch monitor features a slim, lightweight design and a variety of interfaces for 4K monitoring, including four 3G-SDI connectors for viewing 4K content from the PMW-F55. An optional 4K player can be integrated into the PVM-X300 for simple playback of 4K content. The newly-developed “SxS PRO+” high speed memory media, which supports XAVC 4K and XAVC HD High Frame Rate Recording, can be inserted into the player providing quick viewing of 4K images and 4K programs. This SxS Player is scheduled to be available in the spring of 2013. 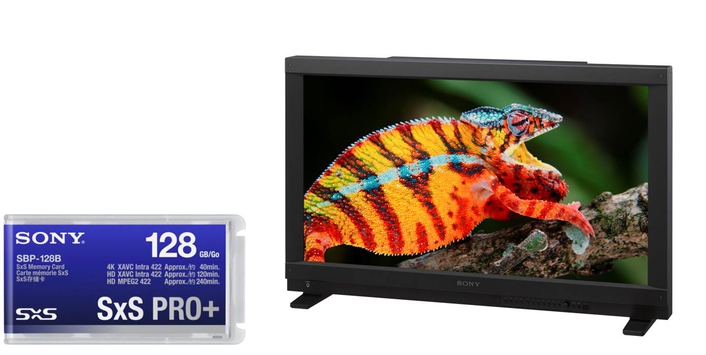 “Through these exciting new announcements, Sony is once again demonstrating its commitment to developing cutting edge products that bring new levels of creativity to our customers”, said Olivier Bovis, Head of AV Media, Professional Solutions, Sony Europe. “In the near future, we also look forward to bringing out new production systems to support 4K live broadcasts of sports and other applications”.