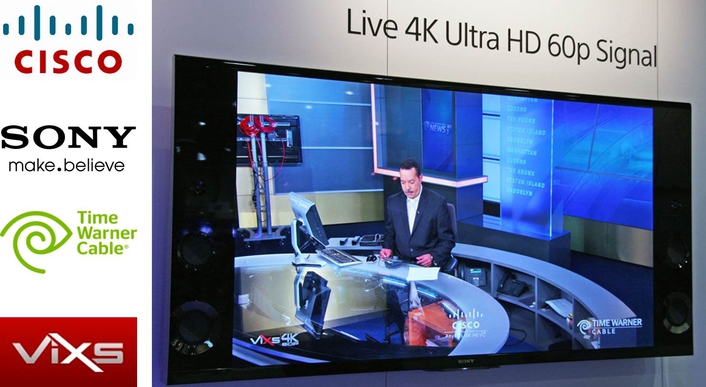 Taking use of this technology, Sony configures IP Live Production systems in order to increase operational efficiency and to reduce system cost for TV live productions with OBVans and in studios.

At NAB 2014, Cisco and Sony became the first companies to publicly demonstrate the live delivery of full-frame rate 4K 60P content. The live demonstration, which streamed live 4K video from New York City to Las Vegas, was on display for NAB show attendees at the Cisco booth and the Sony booth.

Live events in New York City were captured with the Sony F55 4K camera, and HEVC encoded using Cisco’s Videoscape AnyRes – with enhanced support for 4K and HEVC (8-bit dynamic range, streamed at 15 Mbps). The live stream crossed the country to Las Vegas via Time Warner's dedicated IP backbone, not the public Internet. The stream then was delivered to the Las Vegas Convention Center, where it was decoded with a ViXs set-top box with 4K support, and displayed on Sony XBR 4K Ultra HD TVs. 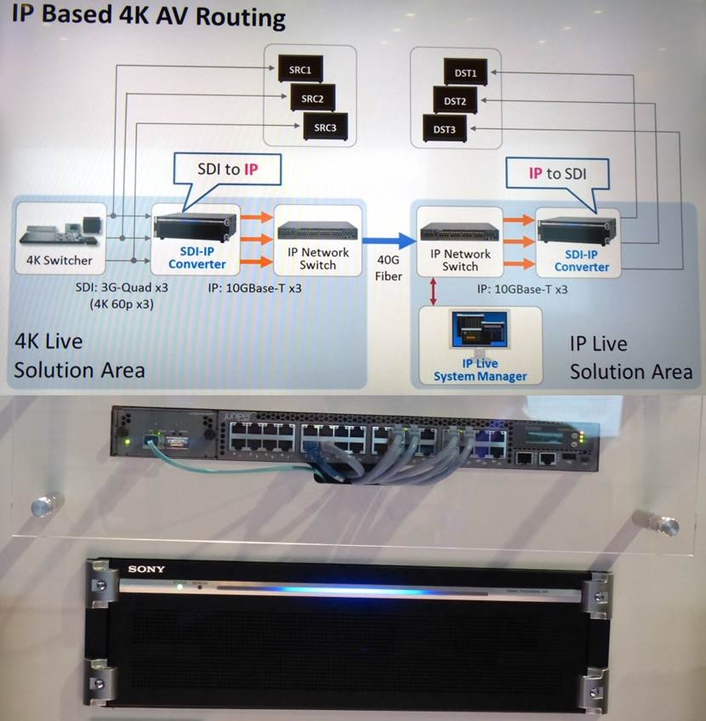 Towards the IP OBVan
In 2013 Sony has built Telegenic’s T25, the first multi-camera OBVan dedicated for 4K. T25 was sent to Brazil to cover three matches of the FIFA Confederations Cup. T25 now again is on its way to Brazil to cover three matches in 4K including the final in Rio de Janeiro. T25 is an all-coaxial vehicle. Every single 4K feed in T25 needs four 3G HD-SDI cables. In addition to the costing of the installation it takes a lot of weight. Going forward the replacement of the four wires in the truck with a single fibre connection would dramatically reduce the weight. Sony’s goal is to replace this with Cat 6 or Cat 7 cable or 10 Gbps Ethernet fibre connections. 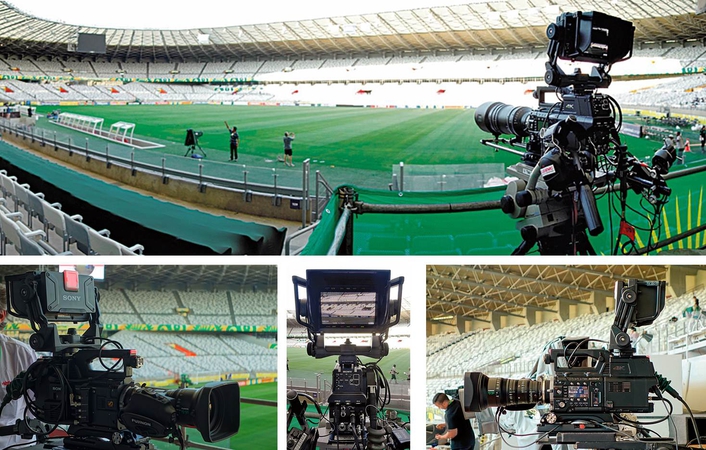 The proprietary AV over IP Interface developed by Sony LSI Design Inc packetises video, audio, meta & control data for signal transmission between production equipment via standard network infrastructures. Sony will introduce IP packet transmission directly to all its 4K devices from cameras, monitors, XAVC servers and MVS-X switchers to Anycast Touch. In the not too distant future we will see RJ45 ethernet ports side by side with coaxial BNC connectors. This should enable system integrators to reduce the cost of implementing 4K in OB trucks.  Currently four coaxial cables support a single 4K signal making the cost prohibitive. The only way to negate this is to move to an IP infrastructure. 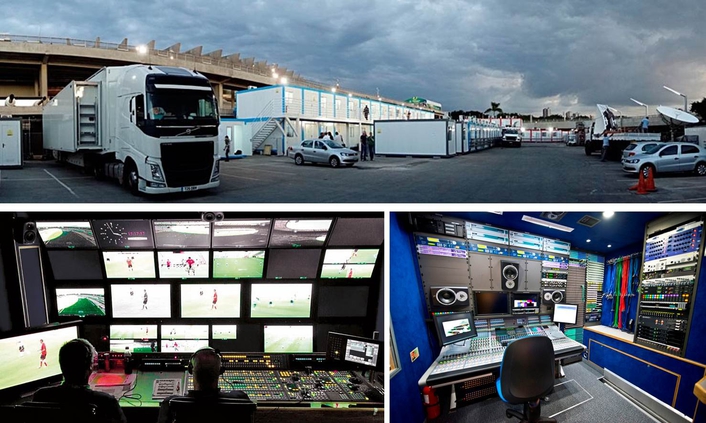 For devices that cannot be retrofitted right away or easily, Sony will have small portable conversion boxes to convert IP to HD-SDI or the other way around. These modules are set for release by the end of 2014. Other parts of the IP Live Production system include an IP Live System Manager, which among other duties will monitor Quality of Service levels. This is also due by the end of the year.

In making the transition to IP no one can risk removing any of the user experience the industry has gained from decades of broadcast engineering. Real-time video over IP with the same speed and latency has to be guaranteed as is standard today with coaxial otherwise the technology will not be adopted by users. To achieve broadcast quality IP genlocking Sony is using IEEE 1588, a precision time protocol that permits a seamless switching of different devices over IP. This has to work with baseband video as well as compressed streams at HD and Ultra HD.

Sony will actively collaborate with FPGA solution providers. Xilinx will be working with Sony under licensing program to enable the deployment of programmable-based video-production equipment. In addition, Sony will continue to collaborate with other thought leaders in the video over IP solutions space like Altera Corporation and Macnica Americas Inc. as FPGA solution providers to continue to innovate next generation video over IP solutions.

The SDI-IP converters will offer IP interface capability to any conventional SDI based equipment, which is crucial for the wide adoption of AV over IP. This conversion approach allows for existing assets to be maintained while the transition to full IP systems is ongoing.

While the IP Live System Manager and the SDI-IP converter are still under development, Sony expects to bring these products to market by the end of 2014.

The image below illustrates an IP-based AV routing system demonstrated at NAB, including the IP Live System Manager and SDI-IP converters. It performs stable transmission of 4K live signals with low latency over IP, using multiple 4K sources supplied through different sources converted from SDI to IP, then routed over the network down to their monitoring destination. 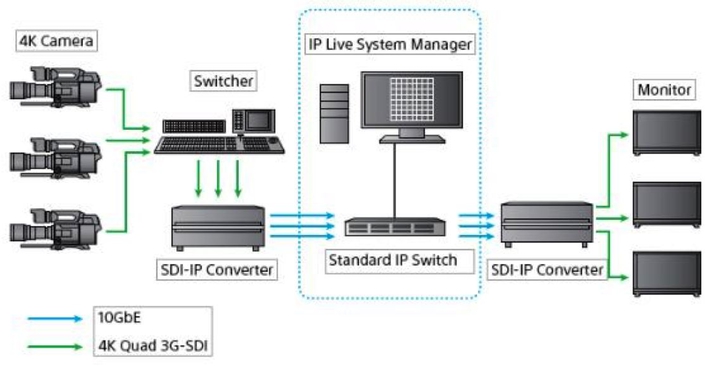 Sony is set to bring a number of systems to market that integrate this new AV over IP Interface technology, in order to build IP environments. These innovations will include routing AV over an IP interface in remote production systems, so as to connect devices in remote locations via an IP network. As with all AV over IP Interface technology, these systems will transmit video, audio, reference, metadata and control data signals by remote operation, significantly reducing production costs.