Sony Demonstrates its "beyond definition" Strategy 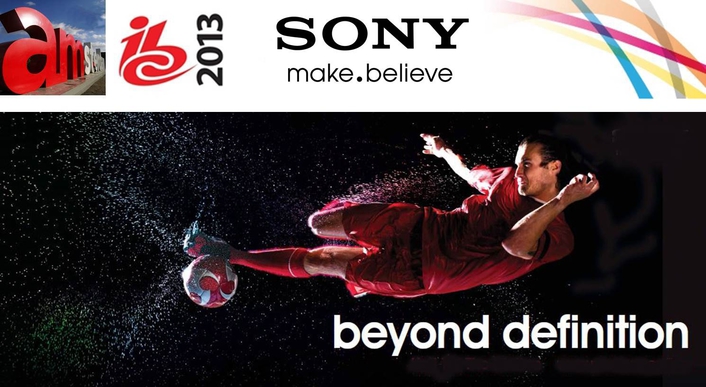 Live 4K Production Solutions
The use of 4K content for movies, TV shows, adverts and documentaries is growing rapidly, boosted by the launch of the Sony PMW-F55 CineAlta camera in February and the new XAVC video format, capable of handling both 4K and HD data streams efficiently. At IBC 2013, Sony was pushing the envelope further with new solutions for live 4K broadcasting for sports and events.

And while solutions by Sony are breaking new technological ground in 4K, they are also allowing broadcasters and producers to follow familiar HD workflows and continue using existing HD systems, lenses, and other assets. They can move easily into live 4K with a relatively small investment and amount of 4K equipment.

For example, the following components will construct a practical live 4K camera system: the PMW-F55 4K camera; the LA-FZB2 Lens Mount Adaptor (The LA-FZB2 lens mount adaptor, with an electronic ND filter, is suitable for live production. The LA-FZB1, without an electronic ND filter, is suitable for TV programming and commercial applications) that accepts existing 2/3-inch HD zoom lenses; the CA-4000 Camera System Adaptor; the BPU-4000 Baseband Processor Unit; and the HDCU-2000 Camera Control Unit. This setup enables fine real-time adjustment of the camera’s 4K image, together with the remote control of intercom, tally and a viewfinder interface that are all required to support live filming. For a complete 4K live shooting and viewing system, you just need to add the PWS-4400 Multiport AV Storage Unit capable of 4K and HD recording, the MVS-8000X Multi-format Switcher for real-time 4K signal processing with a new optional 4K upgrade software, the PVM-X300 Professional 4K LCD Monitor, and a SRX-T615 4K SXRD projector.

A 4K live camera system can also add value to HD video productions. Because 4K captures content at four times the resolution of HD, it can be used to film slow motion HD and replay it at up to 240/200 fps. Another approach is to use two 4K cameras to cover an entire playing field, while utilising PWA-4KS 4K Stitching Software to extract and replay HD video from any area on the field, and the PWA-TS1 Telestrator Software to add player information and graphics (Player data supplied by Sports VU System of STATS LLC (USA)).  This capability can significantly raise the entertainment value of a live sports broadcast. 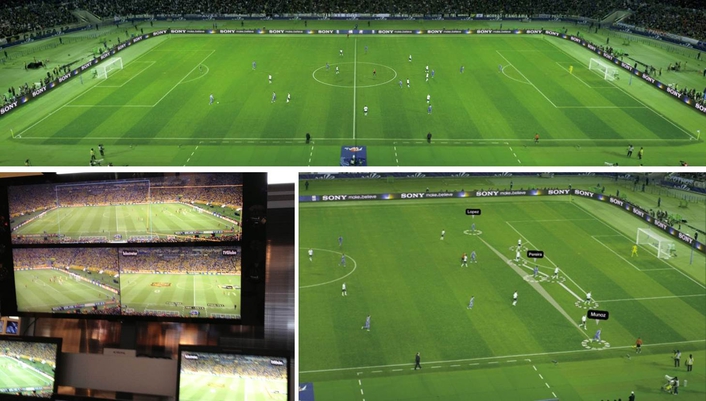 Sony successfully conducted 4K live production trials in a joint project with FIFA TV at the FIFA Confederations Cup 2013 in June with the aim of driving 4K technology further into the forefront (the FIFA World Cup Final 2014 will be covered in 4K).

The camcorder marks Sony’s latest step in expanding the 4K world to everyone, from high-end cinema to corporate and event productions.  IBC2013 was also an opportunity for Sony to introduce its first SSD and HDD portable storage range.  The drives are compatible with a multitude of hardware including Sony’s PMW-50 and PMW-1000 recording decks and can transfer content at up to 400MB per second for SSD and 120MB per second for HDD via USB 3.0. With this speed, approximately 30GB of content can be transferred in less than a minute and a half onto the SSD drive via USB 3.0. The PSZ-SA25 SSD drive, PSZ-HA50 and PSZ-HA1T HDD drives will be available from September 2013.

4K Viewing
- Technology Exhibit: Multiview
A 4K viewing system displays four times as much information as HD, allowing information from multiple sources to appear together in high quality, even on large screens. On the Sony stand at IBC was the Multiview technical exhibit which demonstrates how a segmented high resolution display such as monitor or projector—can be used to present impressive video entertainment and presentations by showing a combination of camera inputs (from multiple sources), movie files, presentation files, Web pages and more. 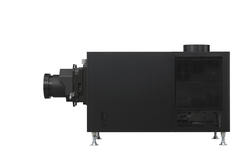 Evolution driven in Video Production Workflows by IT technology
Sony is strongly committed to leveraging the company’s IT expertise to improve professional video production workflows, and to build environments that enable easy handling of very high resolution and high data video work. 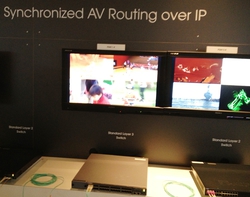 - Technology Exhibit: Real-time IP Live Production Technology
Sony demonstrated at IBC a live broadcast production system that integrates  the industry-standard SDI (high-definition serial digital interface) with IP network transmission technology. It enables transmission of HD or 4K video, audio, and control/reference signals between devices over a single network cable. Multiple high-resolution video and audio, including HD and 4K, can be synchronously transmitted to multiple points, and the source video can be switched smoothly with no switching noise. The system allows for easy conversion into current and future formats and is easily extendible. Sony is actively developing this technology, with the launch of an IP Interface Module, SDI-IP Converter, Network Manager software and various other broadcasting equipment that uses IP technology as it moves into 2014.

- Wireless Adaptor
As technical progress opens the way to greater networking of video production environments, video professionals are increasingly demanding solutions that can quickly and easily transmit high-quality video. Sony wireless adaptors can generate proxy data onboard and rapidly relay results to a broadcast station, or be uploaded to a cloud server, via 3G/4G LTE or Wi-Fi. Working at a Wi-Fi mobile terminal, you can quickly and easily check your video content, set up your devices, and view the status of content. And because this setup can be used together with existing camcorders and decks, it fully supports a wide range of video applications. 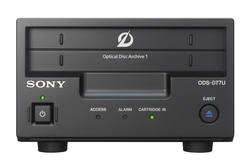 - Optical-Disc Archive Systems
Sony’s optical disc archive is a low-cost high-volume storage system that holds 12 optical discs in each compact cartridge - an excellent solution for long-term reliable storage and for keeping video data compatible from one generation to the next. Sony strengthened the line-up adding high speed drive units and library products;  ODS-D77U USB-3.0 drive and ODS-D77F fiber channel drive, both can run at speeds up to a maximum over 1 Gbps; Sony’s PetaSite series, ODS-L30M, -L60E, and –L100E are modular based library units ideal for building large archiving systems. Since the release of the first products in the beginning of 2013, many customers in the media and entertainment industry have chosen the Optical Disc Archive technology as their long term archiving solution. Vatican Television Centre (CTV) has selected the PetaSite library with Optical Disc Archive for its new near-online storage and long term archiving system. Also by adopting Sony’s Media Backbone Conductor workflow engine and integration platform, CTV will have highly efficient integration of its archive system between its production workflow and tape digitisation systems.

Innovation on New HD Products
As HD remains the core technology for today’s video industry, Sony’s stand is exhibiting a variety of new HD products designed to stay ahead of the rapid changes in the industry environment.

- News Production
Sony’s XDCAM technology, first launched in April 2003, has become the de facto industry standard for news production, with more than 300,000 units shipped to date. About 100,000 of these models use optical discs, with the rest incorporating memory cards. Furthermore, accumulated shipping quantity of professional discs has reached over 10,000,000 pieces. This August Sony was launching the PMW-400 shoulder-mount camcorder with a 2/3-inch Exmor 3CMOS sensor; and in October the company will follow up with the PMW-300 handy-type camcorder with a 1/2-inch sensor of the same type. Both units will deliver high image quality, high sensitivity, and high cost-performance, and will prove themselves as ideal solutions not only for news but also for the production of TV shows, events and more.

- Cinematography
At IBC2013, Sony announced major updates to its PMW-F5, PMW-F55 and F65 CineAlta cameras, cementing its position as the leader in cinematography from HD to 4K. The next updates, Version 2.0, for PMW-F5 and PMW-F55 in October will allow high frame rate recording up to 240 fps in 2K along with an Optical Filter providing the best picture quality and the LA-FZB1 new Lens Mount Adapter** through a simple firmware upgrade.

- Live Production
Sony’s new standard-type live HD production system delivers a high cost to performance ratio and a flexible system configuration, and is suitable for a wide range of production work—in both OB trucks and studios. The new HSC-300R/RF and HSC-100R/RF studio cameras implement Sony’s unique signal-processing technologies and 16-bit 60-dB S/N specifications while delivering even better image quality together with new support for optical-fiber transmission systems. And Sony’s new MVS-3000A switcher delivers significantly stronger functionality than earlier models, at a reasonable price. The availability of both 24 and 16 XPT panels gives customers a wider choice in designing their operating environments.