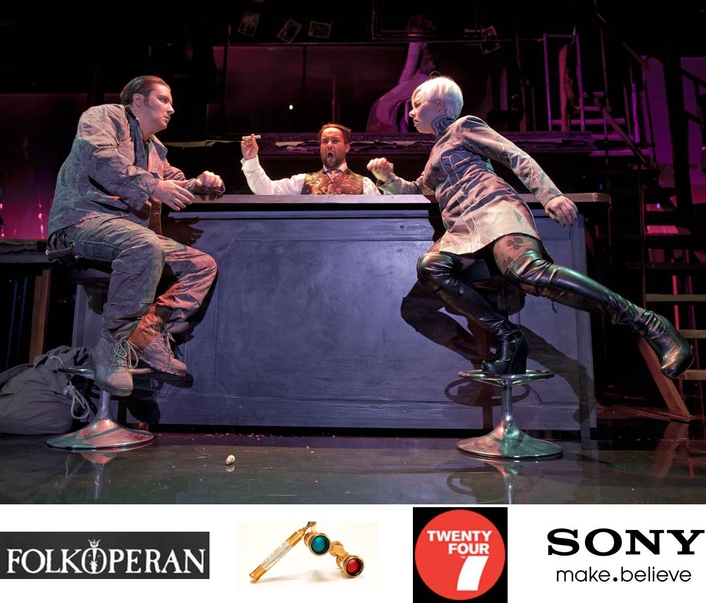 Sony’s new 3D technology is designed to give viewers a thoroughly immersive experience – allowing people to enjoy Faust
Folkoperan in Stockholm has become the world’s first theatre to broadcast an opera in 3D, thanks to Sony’s latest fibre technology. A Sony 4K projector, which provides a picture four times sharper than standard HD, was used during this broadcast of Faust – for the very first time in Sweden. The opera has now been shown across the country in public areas such as People’s Parks and in Community Centres cinemas.

Sony’s MPE-200 processor box played a central role in the production of the 3D premiere. The MPE-200 collected all the signals sent from the six movie cameras, processed them and then distributed the metadata to the optics – in this case, the Sony 4K projector.

“Good quality 3D production requires a processor that can handle huge amounts of metadata. The MPE-200 is the best on the market and has been used in most major live television productions in 3D – including the World Cup, the Ryder Cup and the Stockholm Open,” said Anders Francke, KAM Media Channel Sony Professional.

Folkoperan’s project used technology from Sony Professional, the only company to supply an entire 3D production solution, from recording and transmission through to output and display.

The world premiere of Faust in 3D was introduced by Lena Adelsohn Liljeroth, Sweden’s Minister of Culture, alongside Stockholm’s mayor Sten Nordin. It was also attended by several representatives from the broadcasting industry in Sweden and became the starting point of discussions for several projects planned for the future where 3D technology from Sony will be used.

“This project was made possible only because all parties involved said ‘yes’. Imagine what we could achieve if many more of us acted that way,” added Sten Nordin. “Stockholm aims to be a world class city of culture and one of the most prominent cyber cities in the world.”

Sony’s new 3D technology is designed to give viewers a thoroughly immersive experience – allowing people to enjoy Faust as though they were actually at the opera. However, producing live opera in 3D creates a number of challenges, and requires different lighting and even different choreography from traditional productions.

“To give the audience the best possible 3D experience, we displayed the opera using Sony's 4K projector and a silver screen,” said Matt Sackrén, president of Public Live, the company responsible for the broadcasting.

Kent Lundgren, President of Twentyfourseven, added: “Folkoperan’s 3D production is mainly aimed at digital arenas such as People’s Parks and Community Centres. However, we can see a huge opportunity for 3D solutions in areas such as education, healthcare and industry.”

Sony Professional, a division of Sony Europe, is the leading supplier of AV/IT solutions to businesses across a wide variety of sectors including, Media and Broadcast, Video Security and Retail, Transport & Large Venue markets. It delivers products, systems and applications to enable the creation, manipulation and distribution of digital audio-visual content that add value to businesses and their customers. With over 25 years’ experience in delivering innovative market-leading products, Sony Professional is ideally placed to deliver exceptional quality and value to its customers. Sony's Professional Services division, its systems integration arm, offers its customers access to the expertise and local knowledge of skilled professionals across Europe. Collaborating with a network of established technology partners, Sony delivers end-to-end solutions that address the customer's needs, integrating software and systems to achieve each organisation’s individual business goals.