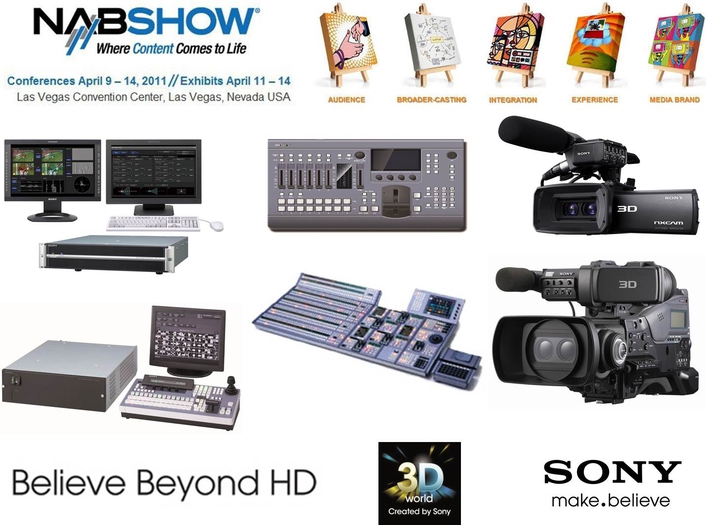 Sony has expanded its range of 3D production solutions with two new 3D camcorders; the PMW-TD300 shoulder mounted 3D camcorder and the compact HXR-NX3D1 3D XDCAM camcorder. Both the PMW-TD300 and HXR-NX3D1 have been designed to deliver stunning 3D images in high-definition, while offering maximum flexibility and mobility regardless of the shooting environment. Sony also announced a new 3D-Link option for the PMW-F3 digital cinema camcorder, enabling greater efficiency for shooting 3D using a rig system.

The PMW-TD300 is a highly versatile shoulder-mounted 3D camcorder which uses two optical lens equipped with three ½-type CMOS sensors. The camcorder can be used for high-definition 3D shooting for applications including documentaries, news and other events. The HXR-NX3D1 also uses a dual-lens, incorporating two ¼-type CMOS sensors which record stunning 3D images using the AVCHD format. Both camcorders have been developed by Sony in response to demand from the industry for more flexible and low-cost 3D production solutions. Using the new 3D-Link option on the PMW-F3, it is now possible to set two camcorders on a 3D rig, enabling the shallow depth of field achieved by 2D cameras.

At NAB, Sony announced that it has expanded its line-up of application software compatible with its MPE-200 multi-image processor, a truly innovative product which is setting standards for live 3D production. The MPES-3D01 3D software suite allows automatic and manual correction of images which can dramatically save on configuration time. In addition, the MPES-2D3D1 software suite is able to convert 2D materials in stereoscopic 3D, based on Sony’s unique algorithm. Moreover, new 3D quality control software from Sony can perform real-time analysis of binocular disparity between the left and right image, helping to overcome the distortion issues which can make 3D viewing uncomfortable.

When shooting on location, production switchers are an essential component of creating high-quality, compelling 3D content. Following on from the high-end MVS-8000X, which can handle up to 200 inputs and 100 outputs, Sony has developed the MVS-7000X, which has 80 inputs and 48 output, ideal for medium-scale 3D productions. Both products are compatible with a 3G single-link operation which together with optional 3D utility software can help to simplify the set-up of 3D Productions. The new MCS-8M and DFS-900M switchers can also be used for smaller 3D events through a software upgrade.

At NAB, Sony introduced the SR-R1000 storage unit, the first memory-based studio deck from the SRMASTER product family. The SR-R1000 has four slots for SRMemory cards, which can record at sustained data rates up to 5 Gbps. It can be configured with up to four input/output ports, each of which can handle a 3D feed. Simultaneous recording and playback of multiple-streams from a single SR-R1000 makes it ideal for a range of studio, live and post production applications. Sony also launched the SR-R1 SRMASTER portable recorder which is perfect for small-scale 3D productions.

Sony already has 3D-compatible professional monitors, the LMD-4251TD (42-inch) and LMD-2451TD (24-inch), which offer highly accurate and reliable images. In addition, at NAB Sony is exhibiting its hugely popular SRX-R320 digital cinema projector, which has been adopted by movie theatres across the globe.

Sony Professional, a division of Sony Europe, is the leading supplier of AV/IT solutions to businesses across a wide variety of sectors including, Media and Broadcast, Video Security and Retail, Transport & Large Venue markets. It delivers products, systems and applications to enable the creation, manipulation and distribution of digital audio-visual content that add value to businesses and their customers. With over 25 years’ experience in delivering innovative market-leading products, Sony Professional is ideally placed to deliver exceptional quality and value to its customers. Sony's Professional Services division, its systems integration arm, offers its customers access to the expertise and local knowledge of skilled professionals across Europe. Collaborating with a network of established technology partners, Sony delivers end to end solutions that address the customer's needs, integrating software and systems to achieve each organisation’s individual business goals.