Sony unveils the companies it will be working with to deliver all 2,500 hours of live HD and 4K match footage worldwide
At the 2014 FIFA World Cup, Sony will be responsible for delivering over 2,500 hours’ worth of live match footage as the theatre of football unfolds over 32 days, with 64 matches across 2 time zones. Today, the company has announced the firms it will be working with to realise this goal and deliver the most content rich World Cup tournament to date, with all 64 matches delivered in HD, as well as three in 4K.

World leading HD Production:
As Host Broadcast Services’ (HBS) delivery partner for the 2014 FIFA World Cup tournament, Sony is responsible for the provision of all HD venue facilities in each of the 12 venues across Brazil, including systems integration (SI), equipment and staff. This includes managing the provision of 12 separate production containers and 288 Sony full HD cameras, providing the production tools for HBS to deliver every minute of live match footage to broadcasters. Working with HBS, Sony has carefully selected its sub-contractors from a pool of leading facilities companies and equipment vendors that, when combined with HBS’s production crews, will be second to none. The following companies will collaborate with Sony to facilitate a full HD Live Production workflow for all 64 matches:
AMP VISUAL TV  -  RF Broadcast  -  CTV  -  Outside Broadcast  -  Presteigne  -  Studio Berlin  -  sonoVTS 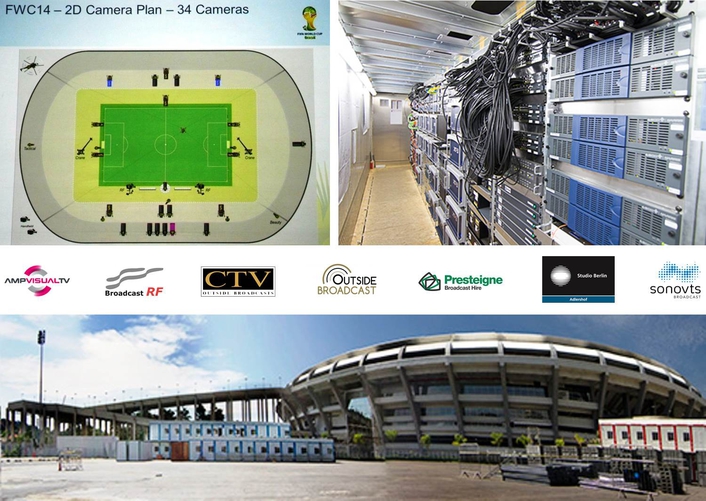 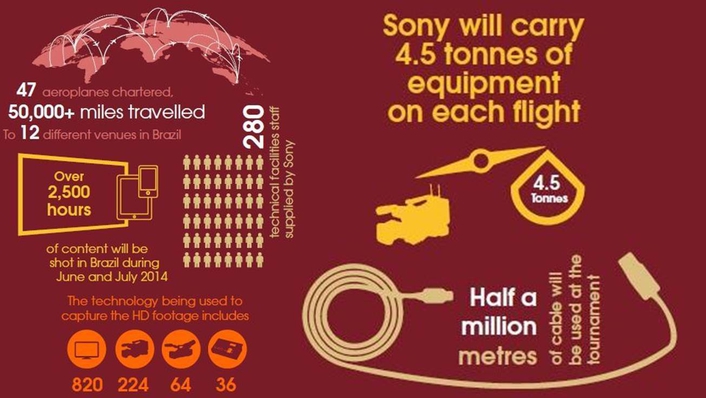 Pushing new boundaries with 4K:
This year also sees the next evolution in sports broadcasting with the first ever 4K World Cup coverage. A game-changer for live sports production, three matches - including one of the Quarter Final rounds and the Final - will be captured in live 4K, creating the most immersive, visually spectacular viewing experience sports fans have experienced yet.

Working together, Sony and HBS will be responsible for the 4K project in Brazil. Sony has selected  Brazilian outside broadcast and programming company Globosat (part of TV Globo Group) and UK-based outside broadcast company Telegenic to provide the production platform. Globosat will be responsible for the provision of on-the-ground technical facilities, whilst Telegenic bring their technical expertise and experience, gained at the Confederations Cup 4K trial last year, to the project. Both companies have been chosen because of their reputation as innovators in their fields, bringing a wealth of expertise in live sports production and reputations for broadcast excellence. Fujinon will also be providing lenses for the 4K production.

With Telegenic’s T25 unit – out of which the 2013 Confed Cup 4K live was produced — unvailable to travel to Brazil this summer, Sony hired a new 4K-ready Globocast truck which will be crewed by Telegenic.

Globosat have a lot of experience in the Maracanã and Sony Brazil is in the process of buiding a 4K truck  to a similar technical spec as T25. Globosat made a good offer around that truck and now there is a good mix of local knowledge and 4K expertise which should work well as both parties can learn from the other.

Twelve Sony F55 cameras and a number of upconverted specialist cameras (such as a helicam and tunnel camera) will create the 4K live mix although the number is a third that of the 37 camera HD production.

Mark Grinyer, Head of Business Development for 3D, 4K & Sports at Sony, commented: “The FIFA World Cup represents the largest sporting event on the planet and this year’s tournament in Brazil is the biggest yet. Delivering a production platform of this scale is no small feat, and we pride ourselves on working with some of the best talent and expertise in the industry. We’re delighted to have secured such a strong roster of companies to work with us to bring the action from Brazil to fans in both HD and 4K, and we’re positive people are going to be blown away by the most visually stunning tournament ever.”

Over the past few years, Sony has worked incredibly closely with FIFA to push the boundaries of live production at events including the Confederations Cup, where live 4K was trialled and the 2010 FIFA World Cup, where 25 matches were filmed in live 3D, and has established itself at the heart of innovation in live production.