2014 FIFA World Cup™ quarter final match and final to be streamed live to Vue Westfield London in 4K
Sony and Vue Entertainment have today announced a new milestone in live sports entertainment, as two of the 2014 FIFA World Cup™ matches will be streamed live to a UK cinema in stunning 4K. In a world first, Sony and Vue Cinemas will be working with technical partners Eutelsat, DSAT Cinema and IDC to deliver the FIFA World Cup™ quarter final match Germany - France and the final in captivating Ultra High Definition on 4th and 13th July, at Vue’s state-of-the-art multiplex at Westfield, London.

Coinciding with rapidly growing consumer interest in 4K, the first ever 4K FIFA World Cup™ brings an entirely new viewing experience to the world of football and this screening is set to bring the action on the pitch to life like never before. The two matches will be streamed live via satellite from the iconic Estadio Jornalista Mario Filho (Maracana) stadium direct to the cinema, and are set to be the most visually spectacular live sports broadcasts to date.

Sony has partnered with IDC, Eutelsat and DSAT Cinema to deliver the live 4K screenings, with the companies working together to provide the satellite feed, signal decoding and 4K projection. DSAT Cinema will support with the commissioning and integration of the equipment, including network and receiver configuration. IDC will be providing the 4K UHD HEVC video decoder and professional satellite receiver that will be installed in the cinema, receiving the 4K satellite feed and delivering the video and audio signal to the Sony theatre projector and audio system respectively. Eutelsat will receive the signal from Brazil at its teleport near Paris, re-encode it in Ultra HD HEVC at 60 fps and retransmit it to the EUTELSAT 5 West A satellite for direct distribution to the cinema.

“These live 4K screenings mean we’re able to bring an entirely new viewing experience to the world of football,” said David Bush, Head of Marketing and Business Development, Sony Professional Solutions Europe. “Sony is excited to be working with FIFA to capture three 2014 FIFA World Cup™ matches in 4K, making this one of the most significant milestones in sports production in recent years. Sony is providing all 4K cameras and other production technology for the FIFA World Cup™ broadcast production. We are also in the unique position of being able to offer not only production equipment but also 4K BRAVIA TVs in consumers’ homes and 4K projectors in cinemas. The confirmation of these live transmissions to cinema represent another trail-blazing example of Sony’s end-to-end leadership in 4K.”

Bush continued: “These events build on Sony’s experience in 4K live production for other application areas. Earlier this year we collaborated with several technical partners to deliver the world’s first live 4K stream from a theatre into a cinema, working with the National Theatre to show War Horse live in ultra high definition at the Curzon cinema in Chelsea, London.”

Steve Knibbs, COO of Vue Entertainment commented: “At Vue we strive to embrace technological innovation in order to deliver the greatest possible experience for our customers. Having installed Sony’s 4K projectors across our UK cinemas, we’re absolutely thrilled that we’re able to underpin the next chapter in live sports entertainment by playing host to ultra high definition screenings of the greatest sporting competition in the world.” 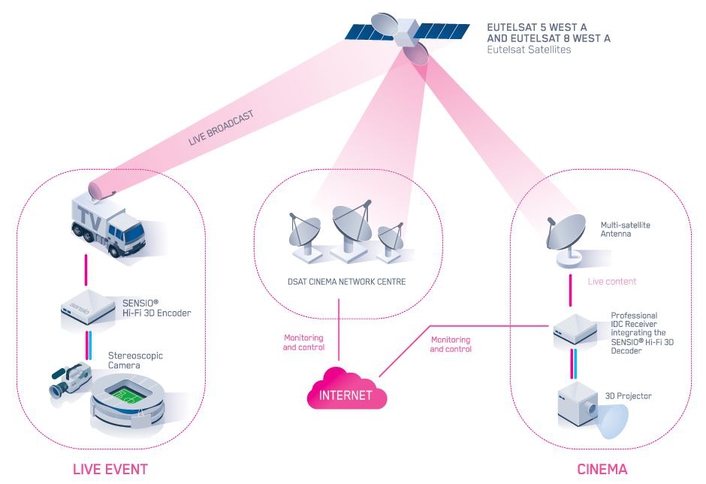 Though tickets will be limited, plans are currently being finalised by the companies involved to offer a few lucky fans the opportunity to attend one of the 4K cinema screenings. For fans not able to enjoy the screenings in the cinema, we’re also showing 2014 FIFA World Cup™ highlights in selected stores across Europe, giving you the chance to experience the thrill of football with match-winning 4K detail and sound on the BRAVIA X95 and X9.

As part of the FIFA TV broadcast production of the 2014 FIFA World Cup™ tournament, Sony is working with select firms to deliver three matches in 4K - including the quarter final match and the final itself. Sony is also responsible for the provision of all HD venue facilities in each of the 12 venues across Brazil, including systems integration (SI), equipment and staff.

Sony’s FIFA World CupTM involvement
Sony is responsible for the provision of all venue services for the 2014 FIFA World Cup tournament, including systems integration (SI) services, equipment and staff. Together with its carefully selected strategic partners it will be dedicated to and responsible for providing every single minute of live match footage in full HD as the theatre of football unfolds over 64 days, 32 matches and 2 time zones. Over 2,500 hours’ worth of live match content will be delivered live from the tournament to consumers worldwide in High Definition, in addition to the three matches being captured in stunning 4K.

About Vue Entertainment
Formed in May 2003, Vue Entertainment is a world class operator and developer of modern state-of-the-art multiplex cinemas. Following the recent acquisition of the Apollo UK circuit in May 2012, the takeover of CinemaxX in July 2012 and the acquisition of Multikino in May 2013, Vue is now operating over 1,300 screens across 146 multiplex cinemas in the UK, Ireland, Germany, Denmark, Portugal, Poland, Lithuania, Latvia and Taiwan.

About Eutelsat Communications
Established in 1977, Eutelsat Communications (NYSE Euronext Paris: ETL, ISIN code: FR0010221234) is one of the world's leading and most experienced operators of communications satellites. The company provides capacity on 37 satellites to clients that include broadcasters and broadcasting associations, pay-TV operators, video, data and Internet service providers, enterprises and government agencies. Working in close partnership with key industry players, Eutelsat was a pioneer in digital broadcasting, followed by High Definition, 3D and Ultra HD. It launched Europe’s first 4k TV channel in January 2013 and in May this year launched HOT BIRD 4k1, Europe’s first demo channel encoded in HEVC (High Efficiency Video Coding) and broadcasting at 50 frames per second with 10-bit colour depth (one billion colours – HEVC Main 10 profile). Eutelsat represents a workforce of 1,000 men and women from 32 countries who are experts and collaborate on delivering the highest quality of service.

About DSAT Cinema
DSAT Cinema is a joint-venture between Eutelsat and dcinex™.  With over 1,300 contracted cinemas for a total of over 8,000 digital screens, DSAT is a major player in the digital delivery market.  DSAT Cinema network is open to all kinds of exhibitors (major circuits and small independents) as well as to all kinds of distributors (major studios, national distributors and alternative content providers).  With over 700 features delivered, DSAT has a long and successful experience in delivering DCP’s to cinemas.  The solution is affordable even for small releases and very reliable offering currently to the distributors the best-in-class proposition. DSAT can distribute pan-European releases as well as in-country releases.  Thanks to its powerful infrastructure including 3 ingest hubs, 2 teleports and 3 satellite transponders on 2 Eutelsat satellites, and the operational support of dcinex™ and OpenSky, DSAT has the flexibility to manage all kinds of releases from small ones to large ones.  DSAT is also a leader in live events with almost all the programs available on its platform and has a comprehensive knowledge and practice of HD and 3D live with over 350 broadcast events.  DSAT is now introducing its solution for 4K live events at High Frame Rate 60FPS. Last but not least, thanks to a very skilled and professional team with the passion of cinema, DSAT provides one-stop-shop service including production, SNG, satellite capacity and support.Cinema exhibitors can benefit from the DSAT universal professional satellite system fully integrated into the theatre.  Movie distributors enjoy working with DSAT since the delivery is easy, comfortable and cost-effective.  And live providers appreciate DSAT’s ability to guarantee the success of the event into the cinemas all across Europe.