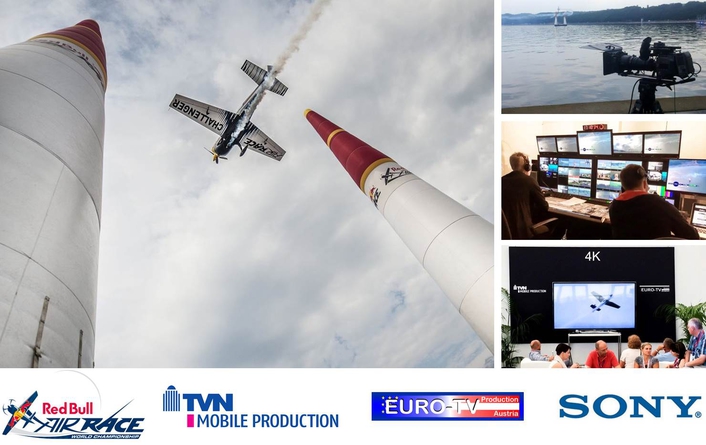 .
Sony has enthralled delegates at IBC 2014 by showcasing content shot at the Red Bull Air Race World Championship in Gdynia, Poland, in 4K Ultra High Definition. TVN MOBILE PRODUCTION, in charge of broadcasting the competition with partner EURO TV, used a full Sony 4K workflow to produce the race as part of its 4K trials.

TVN’s trial 4K workflow consisted of five PMW-F55 cameras fed into an MVS-8000X high-end switcher system working in 4K mode. The 4K files were stored by a PWS-4400 XAVC 4K server, which provides up to 8TB of storage. 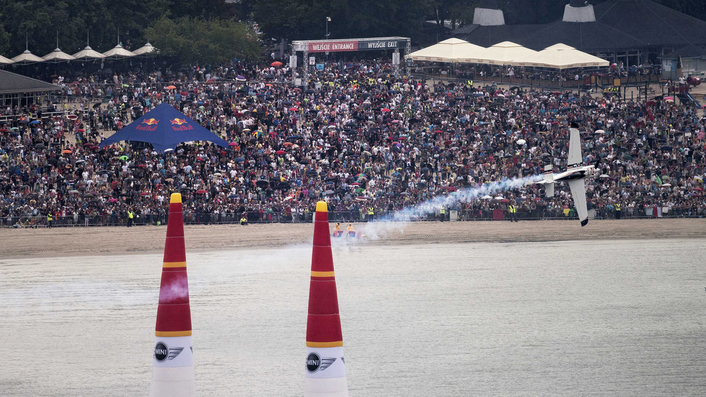 As a city with a strong maritime heritage, Gdynia has previously hosted sailing events, with many boats visiting each year for competitions. “With the Red Bull Air Race, the sea provided such a stunning, textured backdrop to the action” said Christoph Moll, production engineer of TVN MOBILE PRODUCTION. “Filming in 4K helped us to capture the thrill of the race itself, while preserving the beauty of the port and the seascape. Sony’s 4K technologies streamlined the whole process, from image capture through to the management and storage of files.” Markus Osthaus, CEO of TVN MOBILE PRODUCTION, added that “R&D projects like these are facilitated a lot thanks to our long-standing, cooperative relationship with Sony.” 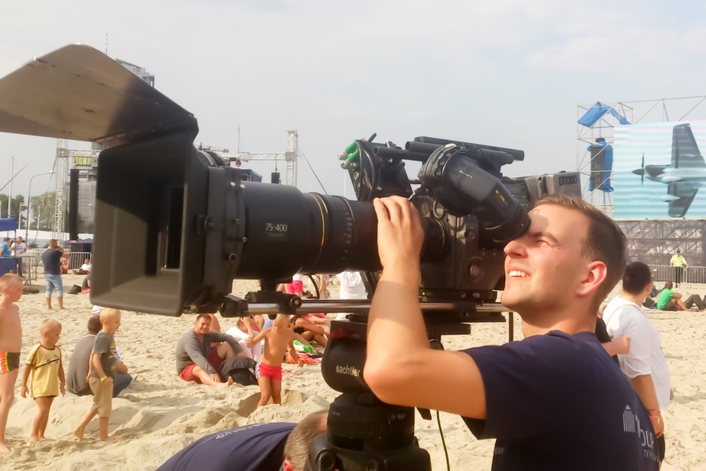 With a brilliant victory in front of 130,000 spectators in Gdynia Austria’s Hannes Arch widened his lead at the top of the Red Bull Air Race World Championship to 13 points, picking up his third straight win in Europe with some smart flying on the challenging track set up on the Baltic Sea. Britain’s Nigel Lamb was second while Matt Hall of Australia got his second straight third place as the two pilots flying the MXS-R planes once again put in stellar performances in the world’s fastest motorsport series to the delight of the crowd watching from the nearby beaches at the first-ever race in Poland. 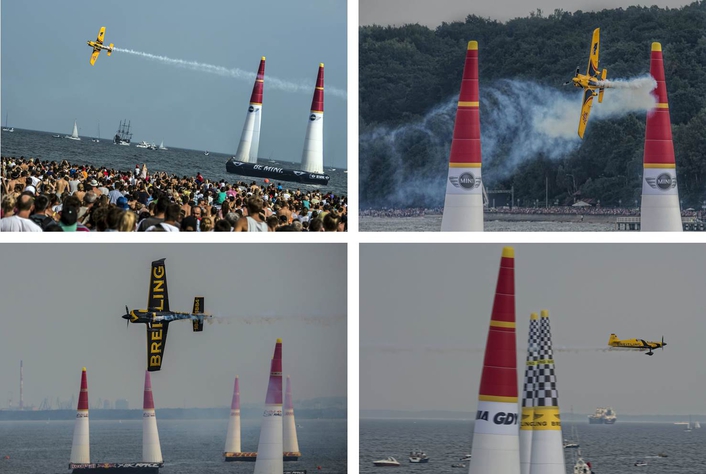 Arch, who won the 2008 championship, now has 42 championship points at the midway point of the eight-race season. Britain’s Paul Bonhomme, the defending champion, was knocked out in the Super 8 round after getting a rare penalty and had to settle for his second straight fifth place, slipping further behind Arch on 29 points. Arch had lagged behind Bonhomme and Lamb in Qualifying but found a new line to fly the difficult 270-degree “Marine Wall” turn faster than anyone else. Arch stopped the clock in 1:09.895, Lamb was second in 1:11.306, while Hall was third in 1:11.538. 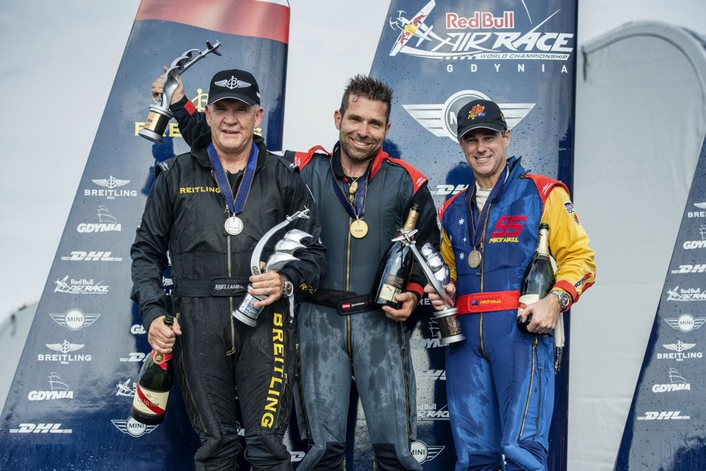 “I prefer to be the hunter than the hunted,” said Arch, who had struggled in training and Qualifying. “Being the hunter suits my style better. But I guess I’m going to have to get used to being the one that everyone else is hunting now.” Winning in Gdynia gave Arch his second victory in 2014 after he was first in Rovinj, Croatia and third straight win in Europe going back to 2010, when he was the Lausitz race in Germany. Arch was also second in Abu Dhabi to Bonhomme and second to Lamb in Putrajaya, Malaysia in the last race. 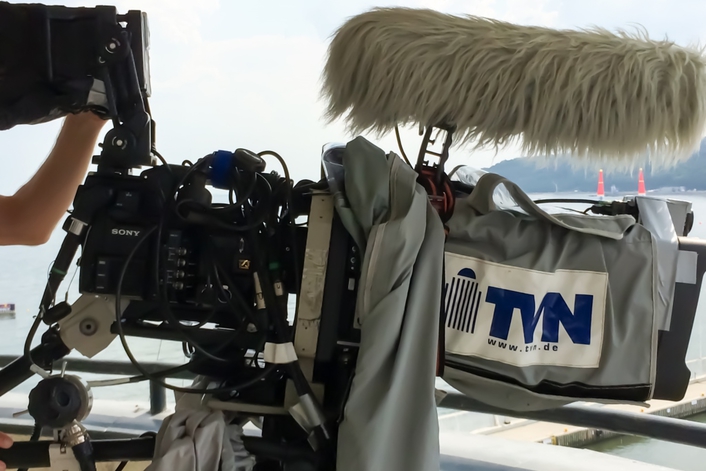 “The Red Bull Air Race is one of the most extreme and exhilarating competitions around, providing the perfect subject for showcasing Sony’s unique end-to-end Ultra High Definition capabilities,” said Claus Pfeifer, Strategic Marketing Manager, Sony Europe. “We’ve had great success this year with the 2014 FIFA World Cup and this is another chance for us to demonstrate that 4K is a game-changer across all sports. There’s simply no comparison quality-wise.” 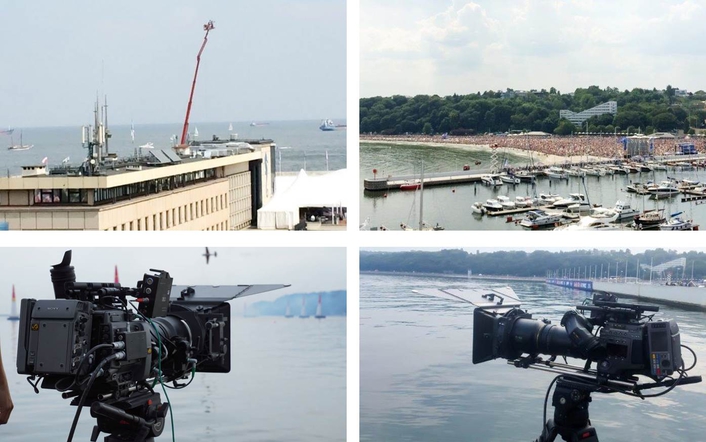 In addition to providing content for IBC, this trial production allowed TVN to experience Sony’s 4K technologies on a first-hand basis, witnessing the benefits of the features and the stunning picture quality. “TVN already use Sony cameras, switchers and monitors in most of their OB Vans and studios. However, this is the first time we demonstrate the benefits and picture quality of 4K for such a vibrant extreme sport event. Innovation in entertainment is at the core of Sony’s mission and this Red Bull event was a great example of how latest technologies like 4K help establish modernised workflows” explained Claus Pfeifer.